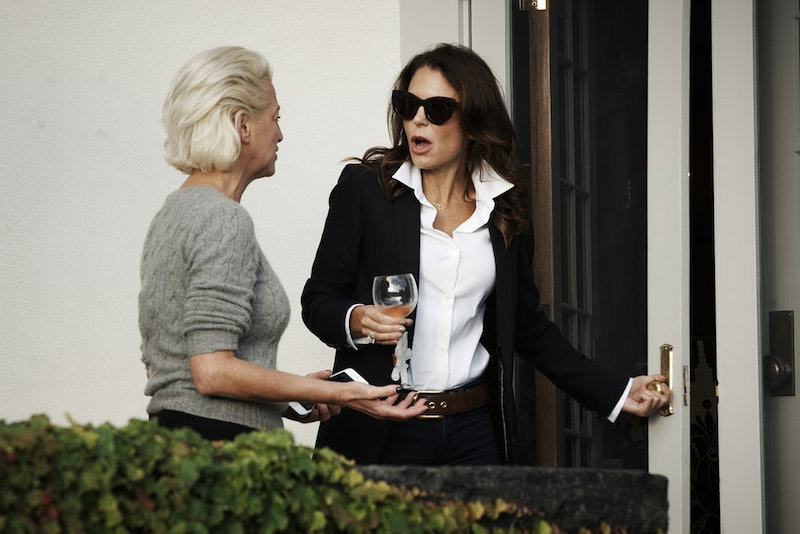 Being an original cast member on a show like Real Housewives Of New York is like being in the mafia — you and your other OGs know each well and you know where all of the proverbial bodies are buried. That's definitely the case with Bethenny Frankel and Luann De Lesseps (although they haven't buried any actual bodies, of course). These two don't always get along, but Bethenny and Luann's friendship timeline on Real Housewives Of New York shows that when the going gets tough, they're still there for each other. That's what matters.

Bethenny and Luann came on Real Housewives Of New York in different places. Bethenny was the poor, single girl, and Luann was married to a count and had a perfect life. Well, over a decade later and some things have changed. What hasn't changed, though, is that Luann and Bethenny love to go at each other's throats whenever they get the chance. Bethenny and Luann have an interesting relationship because they are coworkers and they get paid to fight on television, but they really seem to care about each other when they're not getting paid to fight on television.

This stuff is complicated. It is relationships woven into other relationships on top of weird feelings and total life changes. Let's see how it all get started.

Bethenny was dating a guy named Jason (not the one she married), Luann was living the life shuttling her kids between the Hamptons and the city, and all was well. Bethenny and Luann didn't even really even know each other at this point — they got together for drinks later in the season, and it was just... fine. Luann did try and teach Bethenny about etiquette and Bethenny saw right through that whole thing. They were just trying to get to know each other better here, so there were no big fireworks. That would come later.

Here's where it starts to pick up. Bethenny does a cover shoot for Social Life magazine, and Luann hates it. Bethenny, a true Scorpio, won't let Luann get away with hating it and Luann won't apologize. This all sounds familiar, right? This is the first time that Bethenny calls Luann a snake.

This is the best season — ever — of Real Housewives Of New York and only partially because of Luann and Bethenny. This is the season of Scary Island, a trip that Luann did not attend. It was honestly probably for the best. In Season 3, it was Jill Zarin versus Bethenny, and Luann was on #TeamBethenny. Luann did her usual "let me try and teach Bethenny about etiquette" thing, and Bethenny brushed it off.

Bethenny left after this season for her own show because she was pregnant and getting married and that's far more interesting, and it was a dark time for Housewives fans.

Bethenny's back! Hooray! Hoorah! Honestly, Bethenny and Luann didn't do much either way this season. Bethenny fought with Heather and Sonja more than anyone else, and this was also the season of Luann saying, "Don't be all uncool," which is an iconic piece of television.

This is where it gets good! Not sure if Bethenny and Luann have just had too much of each other by this point, but this is the pinnacle argument. You know, the one in the Berkshires where Bethenny screams that Luann sleeps with everyone and lies about it? This is also the season where Bethenny has to tell Luann that Tom has been cheating on her, making out with other women.

Bethenny didn't want to deliver the news, but better Luann hear it from a friend than anyone else. It didn't do anything — Luann stayed with Tom — but at least Luann had all the information she needed to have.

Luann was planning a big wedding to Tom, and the rest of women, Bethenny included, kept warning Luann over and over that it would be a mistake. Due to these conflicting opinions, let's say, Luann doesn't invite Bethenny to her wedding. It's fine — Bethenny didn't want to go anyway.

Luann married Tom! But then she got arrested, and then she went to rehab, and she had a new lease on life... or something. In all honesty, Bethenny was really there for Luann when she was in and out of rehab — we saw the two talking when Bethenny was on the way back from Bobby Zarin's funeral, and it was a sad moment. Again, Luann had more beef with say, Dorinda, during this season, and Bethenny with Carole. There were other complications at play.

In the current season, it was announced pretty early on that Bethenny, new Housewife Barbara Kavovit, and a few others had to wrestle Luann into rehab for a second time. It was a full-on intervention that Bethenny ran for Luann, and honestly, it doesn't seem like Luann is that thankful. She's mad Bethenny gets better rooms, Bethenny gets this, Bethenny gets that... But don't worry — later, Bethenny screams, "Life is not a cabaret" in Luann's face, so we get to look forward to that.

Things are always complicated in the world of the Real Housewives, but Bethenny and Luann show that no matter how many times you fight, you can always make up... just to fight again.