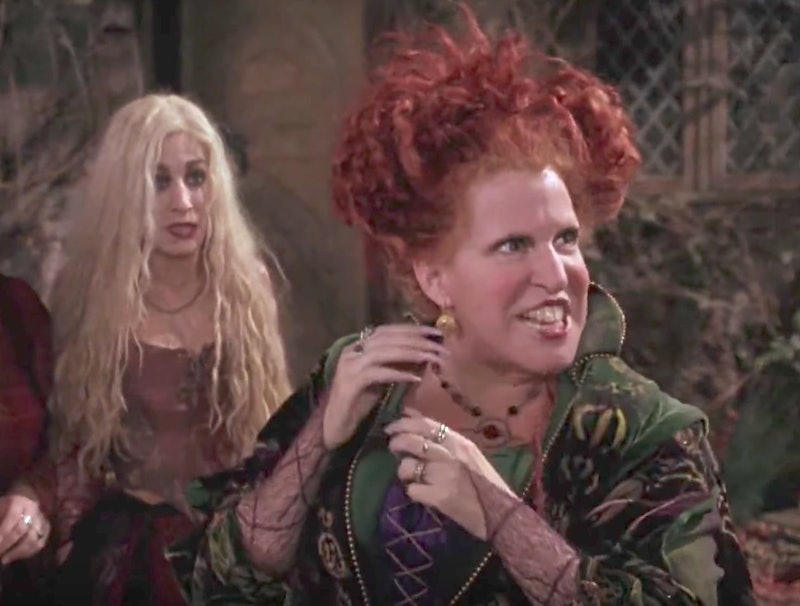 Leave it to Bette Midler to keep it real... Like, really real. The legendary actress, who appeared in the most coveted coven in Hocus Pocus, isn't thrilled about the upcoming Disney Channel TV movie remake. In a recent interview with People, Midler slammed the Hocus Pocus remake — even calling it "cheap." So, it's probably safe to bet that Midler will not make a cameo in the Hocous Pocus remake. Although Disney Channel had already announced that the new movie would not include the original actresses as the Sanderson Sisters, fans of the movie at least had a little hope that the actresses would make a cameo in the updated film. Alas, Midler seems to be decidedly out.

On Monday, at the New York Restoration Project’s Hulaween party that she hosted, Midler told People, "I know it’s cheap. It’s going to be cheap!" Just in case you were wondering how she really felt. Then, she continued, crushing any minuscule remaining hopes that she might appear in the new Hocus Pocus movie, saying, "No, no, no" when outright asked. That's right, not one but three "no"s. It seems like Midler has made up her mind and we won't be seeing her as the beloved witch, Winifred, ever again.

It's one thing to learn that Midler doesn't want to participate in the Disney Channel remake of Hocus Pocus, which originally came out in 1993, but to hear that she thinks the new version will be cheap is another. Still, it makes sense that the actress might have doubts about the new film, which Deadline calls a "reimagining" rather than a remake. The truth is, you really can't recreate the magic of the original Hocus Pocus, so the new one will likely have a lot of differences.

Midler commented on the fact that her role is a difficult one to reprise, mostly because she knows as well as everyone else that she was perfect in it. "I’m not sure what they’re going to do with my character,” she told People. “My character is very, very broad and I don’t know who they’re going to find to play that.” It's kind of true, because it's hard to imagine anyone else singing "I Put A Spell On You" quite as dramatically as Midler does in the original movie.

But it turns out that Midler isn't the only person concerned about who might fill Winifred's shoes. After the news of a new Hocus Pocus came out in September, many fans of the original movie took to Twitter to express their fears that the new film would not do the Sanderson Sisters justice.

One fan did have an idea for an alternative to play Midler's character in the new movie, though:

But even though the actor doesn't have faith in the upcoming Hocus Pocus TV movie, there are still a few good reasons to look forward to the film. First of all, one of the producers of the original film, David Kirschner, is coming back to executive produce the remake, which means that it could actually be equally magical. Secondly, Deadline announced that Scarlett Lacey, who wrote the show The Royals, will write the new film, and having a woman behind a story about three villainous witches sounds like a great update for the new film. Plus, the other two actresses who made up the trio of witches in 1993's Hocus Pocus, Najimy and Parker, haven't been quite as vocal as Midler has about the remake, so there might still be hope that those two return for the new one.

Although it's likely disappointing to know that Midler doesn't support the Hocus Pocus TV movie remake, any movie that celebrates witchcraft and spookiness for Halloween is bound to be good. Sure, it might not be as good as the original, but it can still be a classic for a new generation.