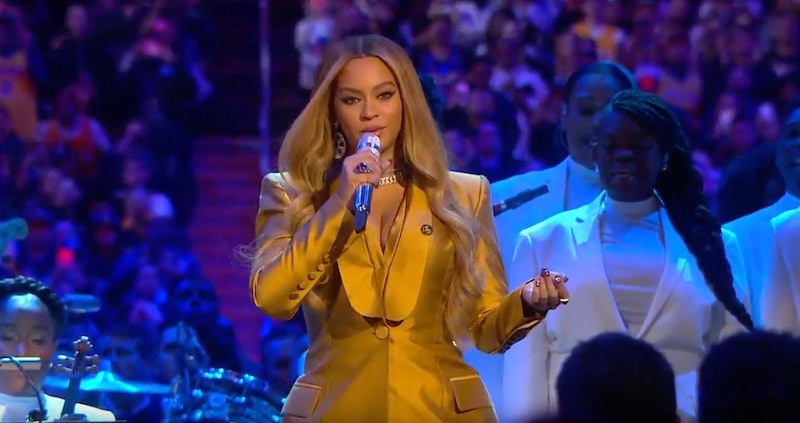 Kobe and Gianna Bryant's public memorial kicked off with a moment of celebration thanks to Beyoncé's surprise appearance. Beyoncé performed at Kobe and Gianna Bryant's memorial held at the Staples Center in Los Angeles on Monday, Feb. 24, the arena that the Lakers player called home during his renowned basketball career. Her performance was a total surprise to audience members and those watching online, but the superstar lifted everyone's spirits as she paid tribute to Bryant's life.

Opening the memorial, Beyoncé appeared on stage unannounced, introduced only as a close friend of the Bryant family, dressed in a metallic yellow suit (one of the Lakers colors), and launched into a stripped-down rendition of her uplifting 2013 single "XO." The song, according to the singer, was one of Bryant's favorites. "I'm here because I love Kobe," she told the crowd, later adding, "I want us to do it all together, and I want you to sing it so loud that he can hear your love."

She was also joined by a choir and a full band as the song steadily built to its final crescendo. From there, she transitioned into a choral version of "Halo," a poignant choice for the occasion, to close out her tribute.

Beyoncé has a long history with Bryant, dating back to her girl group roots. Bryant starred in Destiny's Child's "Bug A Boo" music video in 1999, just a few years after he started playing for the Lakers. The two kept in touch over the years, sometimes posing with each other at major events with their spouses, Jay-Z and Vanessa Bryant. In fact, according to Jay-Z, prior to Bryant's death, they had last seen each other as recently as New Year's Eve.

"He was last in my house on New Year's and he was just in the greatest space that I've seen him in," he said during a talk at Columbia University, according to Entertainment Tonight. "One of the last things he said to me was, 'You gotta see Gianna play basketball.' And that was one of the most hurtful things because he was so proud."

Beyoncé previously honored Bryant on Instagram a few days after his tragic death on Jan. 26. "I will continue to diligently pray for your Queens," she captioned a photo of him and Gianna smiling at a basketball game. "You are deeply missed beloved Kobe." Her tribute at the memorial only proves how truly beloved he was.