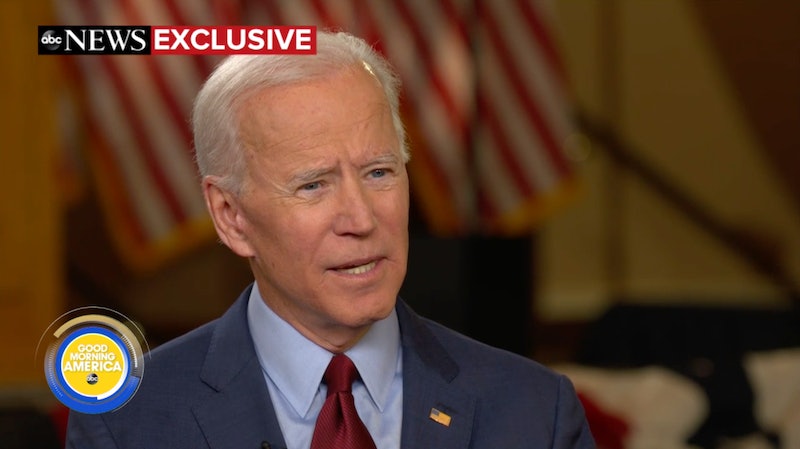 Roberts read from The New York Times interview with Hill that came out after Biden's campaign released a statement saying that he and Hill had spoken. "I cannot be satisfied by simply saying, 'I’m sorry for what happened to you,'" Hill told the paper. "I will be satisfied when I know there is real change and real accountability and real purpose."

"That's what she told me. I was grateful she took the call," Biden said in response. "One of the things — I don't want to get into our private conversation — but the point is, look, I was chairman of the committee."

Apart from taking responsibility for what happened during the hearings in October 1991, Biden said he is "determined to continue the fight to see to it that we basically change the culture in this country" so that a woman isn't put in a position "where she is disbelieved."

"I apologize again because she just did not get treated fair across the board," Biden continued. "The system did not work."

On Good Morning America, Biden was joined by his wife, Dr. Jill Biden, who addressed several women's allegations that Biden had touched them in ways that made them feel uncomfortable. Biden had previously said in a statement that he doesn't believe he ever acted inappropriately.

"I've known Joe for 44 years and one of the things I've always admired about him is the way he does connect with people," Jill told Roberts. "And in 44 years I hadn't heard negative comments, but now is a different time. Women, men are in a different place now and so we have to honor that."

Biden also said that now he will act differently in such situations. "I've always thought that part of leadership, part of politics was listening to people, hearing them, making them feel comfortable," Biden told Roberts. "It's my responsibility to be more sensitive to whether or not someone wants me to reassure them or wants to say hello or wants to show affection and support. And that's my responsibility."