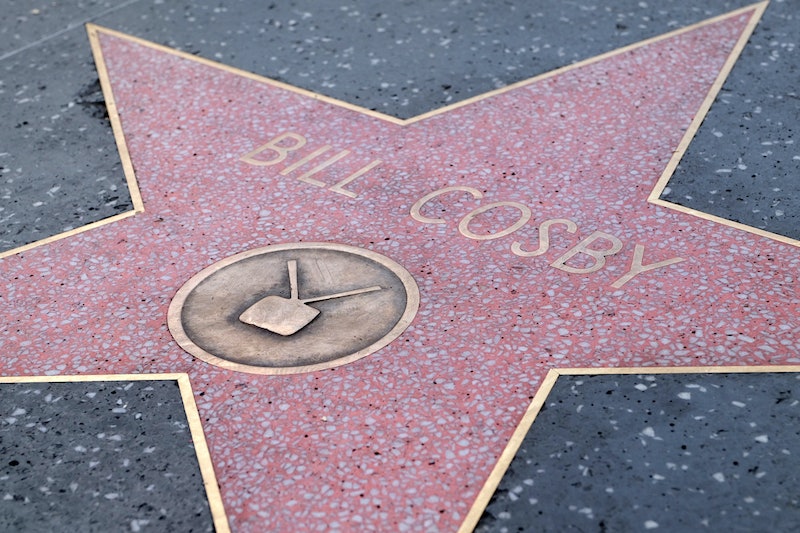 On Monday, the 81-year-old actor who was at one time called "America's Dad" received a sentence of three to 10 years behind bars for drugging and assaulting a woman in his home, according to The New York Times. Still, his fame will live on in one particular spot; Bill Cosby's Hollywood star is staying put despite his prison sentence for sexual assault.

The decision came from the Hollywood Chamber of Commerce on Tuesday, according to CBS Los Angeles. Chamber officials explained it "does not remove stars from the Walk of Fame" because they "are intended to be permanent."

"The stars only commemorate the recipient's professional accomplishments," the chamber wrote in the statement. However, the group did acknowledge Cosby's sentencing, saying, "It is regrettable when the personal lives of inductees do not measure up to public standards and expectations."

The chamber was responding to a petition put forth on Monday by Local civil rights activist Earl Ofari Hutchinson. The petition, which had garnered hundreds of signatures, according to the Los Angeles Daily News, called for the removal of Cosby's star, but there is no precedent doing so. According to CBS Los Angeles, the Hollywood Chamber of Commerce has never taken away a star from the Walk of Fame. In 2015, one year after the sexual assault allegations against the stand-up comedian first emerged, there was another push to remove Cosby's star, but the chamber turned down the request.

The calls for removal to the chamber come after Cosby's court conviction this past April, in which he was found guilty of drugging and sexually assaulting Andrea Constand, a former Temple University staffer whom he mentored, the New York Times reported. The incident happened in 2004 in his Pennsylvania home. Cosby has also been accused of sexual assault by dozens of other women but has always denied their claims.

"No one is above the law. And no one should be treated differently or disproportionately because of who they are or because of wealth, celebrity or even philanthropy," Judge Steven O'Neill said in the sentencing, according to The Hill.

The judge denied Cosby's request for bail and sent Cosby to prison immediately. According to the New York Times, Cosby has said he will appeal the conviction.

The petitions against Cosby over the past few years follow a 2014 instance of vandalism in which Cosby's star was defaced with the word "rapist" scribbled repeatedly on the star, according to ABC News. Back then, after more than 20 women had come forward with their stories, Cosby's career began to careen. The Cosby Show was pulled from TV Land, and the Navy pulled his honorary chief title, ABC News reported.

Cosby isn't the only celebrity to see controversy over his star on the Walk of Fame. In August, the West Hollywood City Council voted to remove President Donald Trump’s star, but the gesture was symbolic because only the Hollywood Chamber of Commerce could do so, PBS reported. The chamber had also responded then with the same answer now to Cosby's petition — that stars have never been removed because each are part of the historic fabric of Hollywood.