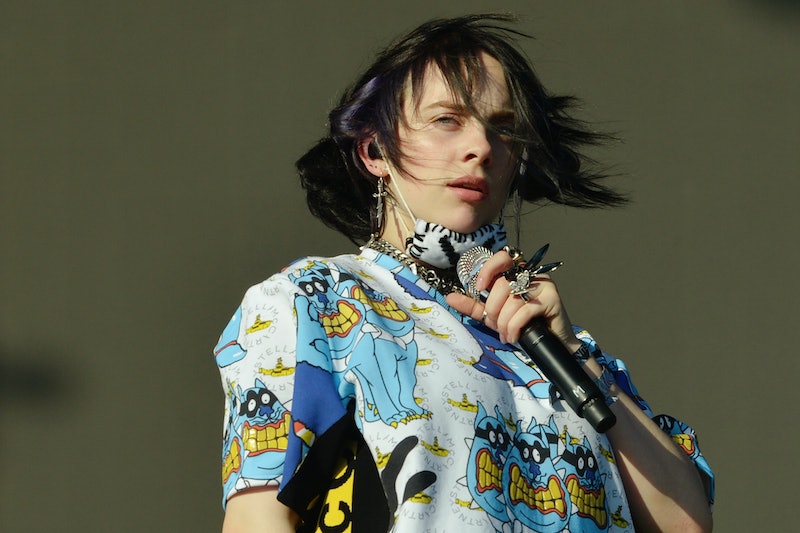 No Time To Die has a new "Bad Guy." Billie Eilish is singing the James Bond theme for No Time To Die. Early on Tuesday, Jan. 14, Eilish teased on her Instagram stories that she might be performing the official theme by posting a series of pictures of Bond girls, like Eva Green, Halle Berry, and Léa Seydoux, causing a lot of speculation on social media. A few hours later, the news was officially confirmed.

According to the official 007 Twitter and Instagram, the 18-year old singer has written the theme song with her older brother and producer, Finneas O'Connell. Eilish is excited to be a part of the franchise. “It feels crazy to be a part of this in every way," said Eilish in a statement, as reported by Rolling Stone. "To be able to score the theme song to a film that is part of such a legendary series is a huge honor. James Bond is the coolest film franchise ever to exist. I’m still in shock."

In the same statement, her brother revealed that writing a Bond theme is "something we’ve been dreaming about doing our entire lives." He added, "We feel so so lucky to play a small role in such a legendary franchise, long live 007.”

Though the choice might seem strange at first, it's not a surprise that Billie was picked for the project: Bond movies are known for their memorable theme songs and famous singers behind them. Adele's "Skyfall" won an Academy Award for Best Original Song in 2013, and Sam Smith later won the award in 2016, so this might be Billie Eilish's chance to get her first Oscar nomination.

Of course, the 2021 Oscars are still a year away. In the meantime, Billie will become the youngest singer ever to perform a Bond movie title song. Smith, who previously held the title, was 23 when he recorded "Writing's on the Wall," the 2015 theme for Spectre. In fact, the 18-year-old has been breaking many records: she was also the youngest person to be nominated in all the Grammy's major categories. After being named Apple's Global Artist of the Year in 2019, it seems like 2020 might be her year, yet again.

More like this
Adam Lambert Called Out The George Michael Biopic Over Potential Casting
By Sam Ramsden
Austin Butler Recalls Lisa Marie Presley Showing Him Elvis’ Bedroom
By Jake Viswanath
You’ll Definitely Recognise Isadóra Bjarkardóttir Barney’s Mum
By Maxine Harrison
Lisa Marie Presley's Secret Granddaughter Was Revealed At Her Funeral Out Of Nowhere
By Jake Viswanath
Get Even More From Bustle — Sign Up For The Newsletter
From hair trends to relationship advice, our daily newsletter has everything you need to sound like a person who’s on TikTok, even if you aren’t.