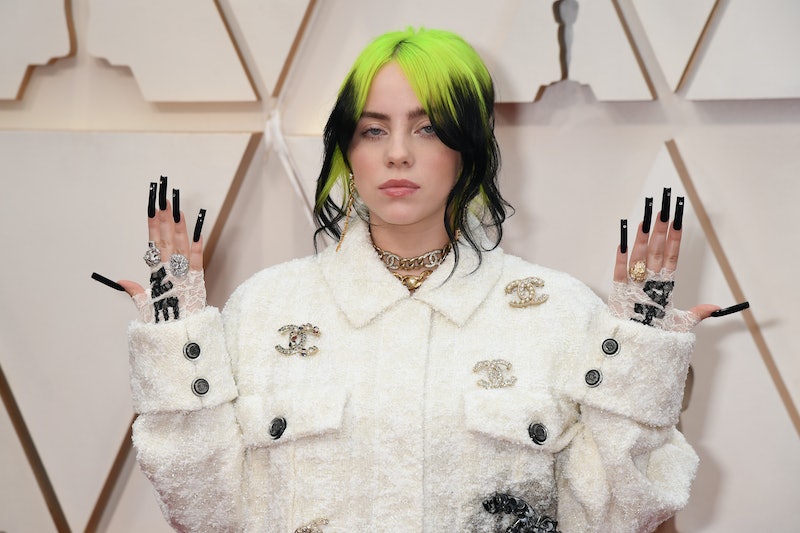 Having over 54 million followers on Instagram isn't as cracked up as it might seem to be — just as Billie Eilish. During a recent interview with her older brother and collaborator, Finneas, on BBC Breakfast, Billie Eilish revealed she stopped reading her Instagram comments because they were "ruining" her life due to all of the negativity. Though the singer only recently stopped checking her comments "like, two days" before the interview was filmed, Eilish said needed to take a break in order to avoid all the "hate."

"I stopped reading comments fully, it was ruining my life," she told host Louise Minchin, adding that the more famous someone becomes, "the more people hate you." But even though Eilish admitted that not reading the comments is better for her mental health, she hesitated to stop completely because she likes connecting with her fans. "It's insane that I even have been reading comments up until this point," she said. "It's just the problem is I've always wanted to stay in touch with the fans and keep talking to them and, like, people have ruined that for me."

Instead, she's tried to find other ways to engage with her fans and followers that don't require her to wade through mean comments. "I still try to like fan posts or whatever and ... if I see fans anywhere, like, I just want to talk to them and be around them because they're people," Eilish said, adding that she considers them "friends." However, she continued, "the internet is ruining my life, so, I turned if off."

While Eilish has often shared her gratitude for the fans who support her music and have helped her become a global superstar, she's also been honest about the downsides of fame. "Fame f*cking sucks. I hate it," Eilish said in an interview with Tidal back in March of 2018. "I don’t mean that to sound ungrateful," she continued, adding that being in the public eye is "a really hard thing and [it] hurts." And while she noted that "you can't please everyone," the "hate" that celebrities can often endure "destroys you."

In November 2019, Eilish explained to Jimmy Kimmel that, for better or worse, it's impossible to prepare yourself for fame. "I’ve loved attention my whole life, but I don’t think anyone knows what fame actually is," the seven-time Grammy winner said during an interview on Jimmy Kimmel Live!. "Because if I did want to be famous — it wasn’t this kind [of famous]." In order to cope, Eilish is focusing on her mental health, and even brings a therapist and some of her friends with her on tour.

Since becoming famous, Eilish has taken strides to make her mental health a priority, and by being open about her struggles, the singer is able to be there for any fans who are going through the same thing — even if she's no longer reading her Instagram comments.

More like this
Everything To Know About Taylor Swift’s 10th Studio Album, 'Midnights'
By Grace Wehniainen and Jake Viswanath
Lizzo Twerks While Playing James Madison's 200-Year-Old Crystal Flute Onstage
By Radhika Menon
Twitter Is Freaking Out Over Rihanna’s 2023 Super Bowl Halftime Show Announcement
By Stephanie Topacio Long
Craig David Is Still Slicker Than Your Average
By Olivia-Anne Cleary
Get Even More From Bustle — Sign Up For The Newsletter