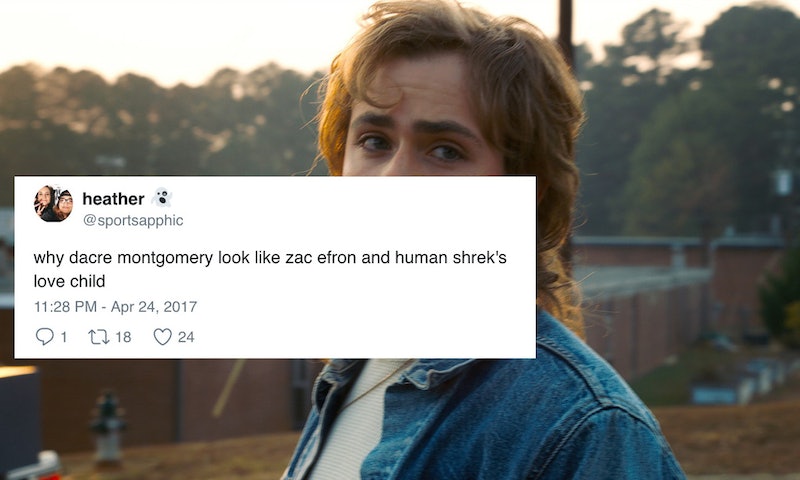 At the tender age of 22, Montgomery is younger than his Upside Down doppelganger by a few years — Efron is 30 — but that only makes the similarities between the actors all the more noticeable for Efron fans. While Efron is famous for starring in big budget blockbusters like Baywatch and Neighbors, he became a teenage heartthrob after starring in Disney's High School Musical franchise.

As Time points out, the actors' blue eyes and dirty blond hair is definitely playing a role in the Efron and Montgomery comparisons. However, the actors also share a similar brand of charisma. Billy is an awful human being, but Montgomery's boyish looks and energy are reminiscent of Efron. While Montgomery was far more endearing in his breakout role as Jason in this year's Power Rangers reboot, it's his Stranger Things role that has Twitter convinced that he and Efron are totally secret brothers.

Clearly, Netflix needs to run with the Efron confusion and draft the High School Musical actor for Season 3. Maybe he could play Billy's unmentioned, non-abusive brother who could move in with the family to take care of Max, who deserves so much better. Either way, looking at Montgomery gives viewers a decent idea of what Efron might look like in the '80s, and they seem to be here for it.

It should be noted that Efron is not the only actor people think Montgomery looks like. He must have one of those faces, because Stranger Things fans are comparing him to everyone from Robert Downey, Jr. to human Shrek (it's the jawline). Montgomery has way more than just one doppelganger running around, as the enthusiastic tweets from people who are marathoning their way through Stranger Things Season 2 proves.

Ultimately, everything leads back to Efron. From Billy's basketball court prowess to that dangerous glint in his eye, the guy is clearly channeling Efron from the future. People are so certain that these two actors were separated at birth that a new wild fan theory has been spawned. Remember how everyone thought Steve was the father of Parks and Recreation's Jean-Ralphio after Season 1 ended? Well, now some fans are lobbying for a reveal that Billy is Efron's dad.

That would be a bizarre turn of events, there's no doubt, but weirder things happen in every single episode of Stranger Things. And, hey, given the physical similarities between the two, there's no denying it would be hilariously meta for Billy to end up with a son named "Zac" before the series ends.

After another intense season of Stranger Things, it's just nice to have something that's not terrifying to focus on. And the remarkable shared likeness of Efron and Montgomery is a nice distraction. Even though Billy is the worst, he has given the world a glimpse of what '80s-era Efron would have looked like, and in case you were wondering, the answer is impossibly cool.

Hey, knowing that Efron can pull off a mullet if a the occasion ever calls for it might end up coming in handy one of these days.

Throughout Season 2, Billy offered up a steady stream of awfulness, but at least he also revealed that Montgomery is Efron's doppelganger. If Hollywood ever needs to cast a little brother Efron, it turns out they won't have to look any further than the Upside Down to find the perfect candidate.