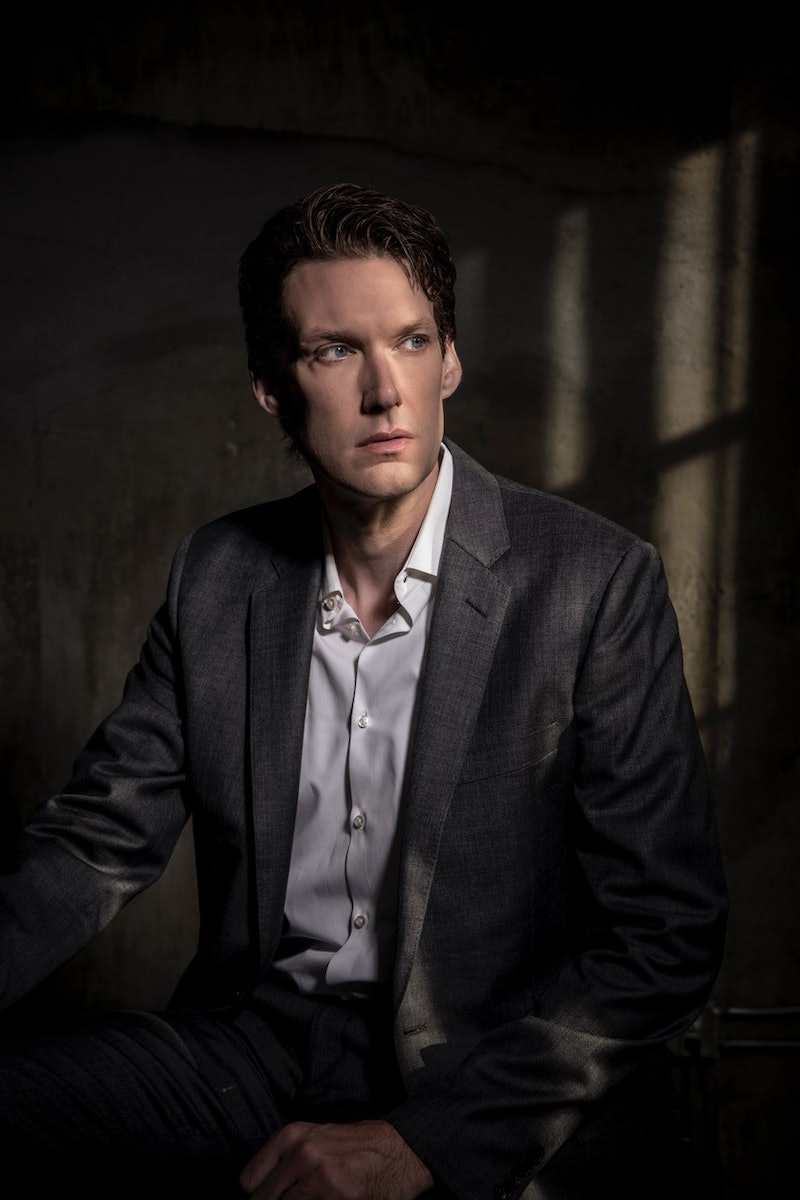 Over the course of his 20 years as an investigative journalist, Billy Jensen has knocked on doors, chased down leads, and turned a steady spotlight onto unsolved murder cases through his writing and TV reporting on Crime Watch Daily. He pioneered a method of social media outreach that uses precisely targeted Facebook posts to help identify and locate on-the-run suspects through online crowdsourcing. Today, he’s called on by police departments as a digital consulting detective. Now, after decades of sharing the stories of others, he shares his own with his memoir, Chase Darkness With Me.

Released exclusively as an Audible Original, Jensen’s book reveals the origins of his passion for crime reporting and delves into his storied career, which includes a pivotal role in "The Body In The Barrel" investigation, a stint working alongside Long Island's native Amy Fisher, and his time covering the unfolding mysteries of the Allentown 4 case. But whether he is tracing the steps of alleged serial killer Terry Rasmussen or working with Facebook to find the caught-on-tape killer he calls “The Man In The Green Hoodie,” Jensen’s focus is always on the victims.

"Even though I'm telling a story about a specific crime," Jensen tells Bustle in a phone interview, "I'm trying to paint the victim as a person and bring them back their humanity… We need to get a lot more empathy directed back towards these victims. So that's one of the reasons why I want to paint them in such a way. One, they deserve it. And two, it's for all the other victims that are out there that I'm not talking about. Just reminding everybody that this was a person, and this person had hopes and dreams."

'Chase Darkness With Me' by Billy Jensen

Jensen says this is why he took issue with Netflix's documentary series Conversations with a Killer: The Ted Bundy Tapes and the trailer of its upcoming companion piece, Extremely Wicked, Shockingly Evil, and Vile, which stars Zac Efron as the serial killer.

In Jan. 2019, he tweeted, "As we all binge The Bundy Tapes on @Netflix and share the trailer for the Zac Efron movie, please remember the victims. These women all had hopes and dreams. They should all have movies made about them. I always try to remember what these monsters took away. #TedBundyTapes."

In the thread that followed, he shared photos of the victims along with details of their lives. The post went viral. (As of publication of this article, the first tweet in the thread had nearly 55,000 retweets and over 120,000 likes.) A few weeks after posting the thread, Jensen got an unexpected retweet — with comment — from Joseph Berlinger, the director of both films. "I couldn't agree more," Berlinger tweeted. "The @netflix series and the @ZacEfron movie were created to arm a new generation about how one can be seduced and fall victim to sociopaths who seem to be worthy of trust. That’s the enduring lesson of Bundy and why I spent two years on these projects."

"I thought the documentary was well done,” Jensen says, when asked about the Twitter exchange between he and director Berlinger. "But whenever I'm watching something like that, I'm always waiting towards the end. I'm like, 'Okay, are we going to hear more about the victims?' And I was waiting for — maybe before the credits, even after the credits — just putting a picture of each victim and then just a couple lines about who they were, what they wanted to do with their lives. Just something. And they didn't have that. And I was like, 'This is bullsh*t.' Then, I had also seen the Zac Efron trailer. And I was like, 'Well, what's bullsh*t is that — one of the many problems of the genre of true crime is — the more somebody kills, the less you know about the victims and the more you know about the perpetrator.'"

As he does in his writing, Jensen sought to draw attention to the humanity of these murdered victims, which he feared was overlooked in Berlinger’s Bundy documentary. "I was like, 'I'm going to find pictures of each one of these women and girls — some of them were under 18 — and find out whatever I could about who they were and what their dreams were, like what they wanted to do with their lives," Jensen says. "To show what this guy took away."

He's also frustrated by media coverage that chiefly describes Bundy's victims as "pretty," a descriptor he finds objectifying. "The way they're seen by their killers is just: 'This is somebody I can just use and then throw away.' That's what Bundy thought." Jensen feels that such superficial descriptions of the victims risk "playing into" the killer's perspective.

The trailer for Berlinger’s Extremely Wicked, Shockingly Evil, and Vile likewise concerned him, because Jensen fears the movie might “romanticize” the serial killer. "Show [the audience] what this guy took away," Jensen says. "Don't just show a teenage heartthrob like Zac Efron taking his shirt off and being all ripped. Are you going to show the horrible things that [Bundy] did? Are you going to show that he cut off a woman's head, took it back home and raped it? You're not going to show that in the movie. That wouldn't probably be good for your movie."

"...we've been conditioned as people to be afraid of monsters. There were always 'monsters' out there."

But Bundy's not the only killer in the Hollywood spotlight: Charles Manson and his murderous followers are the center of two forthcoming films, Mary Harron's Charlie Says and Quentin Tarantino's star-stuffed Once Upon a Time in Hollywood. These are the latest in a long line of true-crime inspired films, from Alfred Hitchcock's Pyscho, to Jonathan Demme's Silence of the Lambs, to David Fincher's Zodiac.

Asked why Hollywood is so hooked on serial killers, Jensen says, "Because we've been conditioned as people to be afraid of monsters. There were always 'monsters' out there." It used to be mythical beasts like dragons and the Minotaur whose stories haunted us. "Now, we're in this very civilized society, you've got all these buildings, and all this infrastructure. And the only 'monsters' that are out there are these serial killers," Jensen explains, "And the idea that there is somebody going out and hunting other people, that is awful. But people are attracted to that, because this is the monster that we've been fighting forever."

"That's always been an issue with true-crime in general," Jensen says, "That you have all these super villains: the Zodiac Killer, or Jack the Ripper, and Bundy, and [John Wayne] Gacy. And you have so few named or identifiable superheroes."

Jensen's frustration with society’s fascination with serial killers has led him to pursue a new goal in his work: He wants to uplift contemporary true-crime superheroes, like Paul Holes and Michelle McNamara, colleagues who he believes were crucial to the capture of the Golden State Killer suspect Joseph James DeAngelo.

Crime writer McNamara, who passed away in 2016 before completing her book I’ll Be Gone In The Dark, spent years educating the public about the crimes of the prolific rapist and serial killer she dubbed The Golden State Killer. As an investigator, Holes spent years on the case, and spoke with McNamara at length while she researched her book. (Jensen was also part of a small team that helped finish her book, which was released 22 months after her death.) He and Holes joined forces with McNamara's widower, Patton Oswalt, to promote the book, which went on to become a #1 New York Times bestseller. Now, Jensen serves as co-executive producer on the in-the-works HBO docu-series based on I’ll Be Gone In The Dark, which will not only tell the story of the Golden State Killer, but also the story of McNamara's life and passion for true crime.

Together, Jensen and Holes have teamed up for their own podcast Murder Squad, where each week they share a cold case, calling out for the kind of crowd-sourcing crime-solving once done by TV shows like Unsolved Mysteries and America's Most Wanted.

Through his work, Jensen hopes not only to unearth witnesses and crack cases, but to shift the focus from "propping up these killers and fetishizing them." Instead, he wants to inspire a new generation of true crime viewers and readers to become true crime's superheroes. "Somebody reads Michelle McNamara's book and says, 'I want to be like her when I grow up.' Or somebody sees Paul on TV and says, 'I want to solve crimes like him when I grow up.' That's the sort of stuff that I would like to see."

Chase Darkness With Me is available on Audible now.

More like this
The 20 Best Audiobooks To Fall Asleep To
By Aoife Hanna and K.W. Colyard
10 Must-Read New Books Out This Week
By K.W. Colyard
Conversations With Friends' Endometriosis Scenes Are As Brutal As It Gets
By Ivana Rihter
The 43 Best Mystery Books To Read Now
By Morgan Leigh Davies
Get Even More From Bustle — Sign Up For The Newsletter