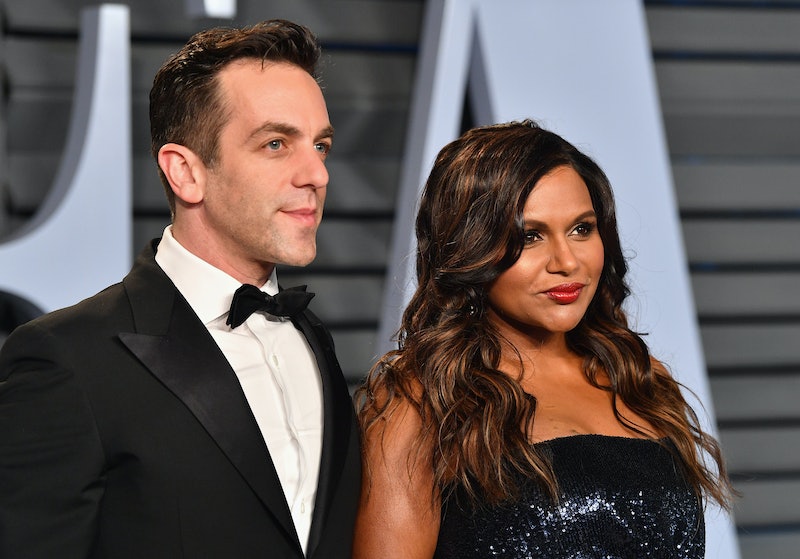 Move over Marlon Brando, because there's a new godfather in town. In a recent interview with Good Housekeeping, Mindy Kaling revealed B.J. Novak is her daughter's godfather, and it sounds like a role that he's relishing. While there was a time when Kaling struggled to define what society would call the role her The Office co-star played in her life, she's now settled on a pretty simple answer: he's family. And her 16-month-old daughter, Katherine, couldn't be happier about it if her godfather's near weekly playdates are anything to go by.

The Office fans have been fascinated by Novak and Kaling's on-again-off-again relationship and their friendship since the show premiered, and The Mindy Project creator totally gets the fascination with their next level friendships. She even used a Michael Scott line to describe them in her 2015 book Why Not Me?: soup snakes. "'Soul mates' is what you aim for, but soup snakes is what you get sometimes," she wrote.

Now things are a bit less complicated. "The truth is that B.J. is so much more like family now than a platonic friend," she explained to Good Housekeeping. "He's the godfather to my daughter, he comes over like once a week. Sometimes he'll come over just to hang out with her."

She continued, "In the When Harry Met Sally version of platonic friends, I too think that's strange. But when you've known someone for as long as I've known him — the time that we met each other, which was like 24. Now, we're both almost 40. It's such a long time that he truly is just a part of my family."

Novak's role in Katherine's life is truly aw-worthy, and it's wonderful to know that Kaling considers him a part of her family. There was a time when their friendship seemed to defy categorization. During a 2015 interview with InStyle, she said, "My relationship with B.J. Novak is weird as hell. He is not my boyfriend, but he is not my best friend. I guess you could describe our relationship as a 'romantically charged camaraderie with loud arguments,' but I don't think Facebook would accept this as a new status."

That sounds fun in some ways, but also exhausting. Kaling appears to be pretty happy with the less dramatic definition for their relationship that they've settled on these days. As she explained to Good Housekeeping, "Even that's shifted. He comes to Christmas and he's just a member of the family now. But I do remember saying that, in my first book, I think … but I'm so old. That came out, like, eight years ago!"

Motherhood appears to have led to a number of changes in Kaling's life. The 39-year-old is all bout keeping Katherine's life as normal as possible, and that includes not sharing her face on social media so far. She also hasn't revealed who the father of her daughter is, which is something private that the actor doesn't have share with her fans. One thing she has shared is how her priorities have shifted since welcoming Katherine into the world.

During a January interview with Bustle, Kaling explained that she's pickier about what jobs she takes on now that she's a mom. "Now there's this little person that I want to spend so much time with at home, it just makes the projects that I do — they really have to matter," she said. "I don’t want to do things just because. It has to be a lot more significant."

Still, Kaling has plenty of projects coming up, including Late Night with Emma Thompson, Hulu's Four Weddings and a Funeral, and a Netflix series based on her childhood. The Office writer/star is keeping busy in front of and behind the camera, but if she needs a babysitter, it sounds like Katherine's godfather is happy to babysit whenever his soup snake asks.