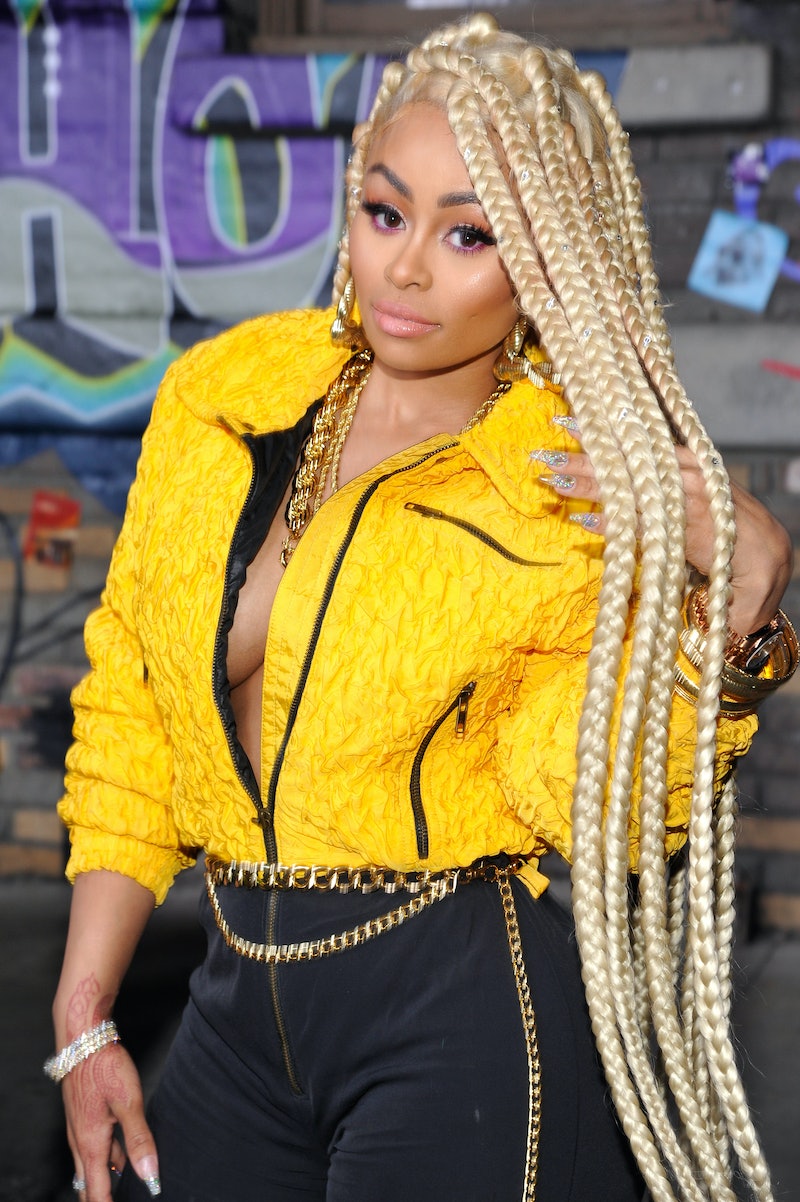 Blac Chyna has quite a storied history with the Kardashian-Jenner family. She has a daughter named Dream with Rob Kardashian. She used to be close friends with Kim Kardashian. And, of course, her ex Tyga dated Kylie Jenner at one point. That's a lot to unpack, but Blac Chyna insisted she and Kylie Jenner are cool these days during her Wednesday, May 15 appearance on The Wendy Williams Show.

When Wendy Williams asked if things were good with Kylie, the mother-of-two said, "I mean, on my side, the last time we spoke … Because, you know, that is Dreamy’s auntie and stuff." According to Us Weekly, Blac Chyna added, "And when me and Robert were together, we kind of put those differences aside. From now on, I’m fine on my side and I’m hoping that we’re good."

Even though that's a a very brief and positive update, Chyna, Tyga, and Kylie have an undeniably complicated history. As fans may recall, Tyga met Kylie at Kendall Jenner's sweet 16 party, where the rapper performed in 2011. Then Tyga and Chyna met on the set of his "Rack City" music video that same year. Chyna gave birth to their son King in October 2012.

In 2014, Kylie and Tyga were spotted together often, fueling some dating rumors. It was in August of that year that Chyna and Tyga reportedly split. Then in 2015, there was more speculation about a possible romantic relationship between Tyga and Kylie. Chyna's longtime friend Amber Rose publicly criticized the pair during a February 2015 radio appearance, which led to a social media back and forth with Khloé Kardashian.

Eventually, Tyga confirmed his romance with Kylie in March 2015. From that point on, there was believed to some very public shade and animosity between Chyna and Kylie. In January 2016, Chyna started dating Kylie's brother Rob. And in April 2017, Tyga and Kylie broke up.

Sure, that's a ton of stuff that happened, but Chyna and Kylie actually seemed to bury the hatchet years ago. During a September 2016 episode of the now-defunct show Rob & Chyna, the former couple hung out with Kylie and Tyga at Khloé's birthday party. Instead of standing on opposite ends of the room, they actually did talk and it was captured in front of the cameras.

At the party, Chyna hugged both Kylie and Tyga. Kylie even told Chyna, "Oh my god! I'm so happy you guys made it!" As simple as that is, it was a big deal at the time, given the complexity of their very public relationships.

Back in April of that same year, Chyna and Kylie made amends via a mirror selfie posted to Snapchat. Sure, it makes sense that they'd inevitably be spotted together at events like family functions, but seeing just the two of them in one photo was very surprising at the time and seemingly broke the internet.

Kylie even trolled everyone with her caption, "We've been best friends the whole time," which clearly was a joke. Nevertheless, props to them for keeping it positive and having a sense of humor. Chyna shared that same photo and wrote, "Hanging out with my lil sis."

Obviously, taking this photo is not what actually led to the peace between these two Instagram all-stars, but it is the first time the world saw them peacefully hanging out. During a July 2016 episode of Keeping Up With the Kardashians, Kylie took it upon herself to sit down with Chyna after Rob revealed her pregnancy to the family. She explained to her sisters that she wanted to talk with Chyna one-on-one "because there's been so much misunderstanding" between the two of them.

After the conversation, Kylie concluded, "I feel like a weight has just been lifted off of both of our shoulders, and I feel like that's all we needed."

Throughout the years, Kylie has been a devoted aunt to Rob and Chyna's daughter. During the recent May 12 episode of Keeping Up With the Kardashians, Kylie hosted a birthday party for her niece Dream. Initially, Rob had a big party planned for his daughter, but the California wildfires derailed those plans in November.

In the episode, Kylie said, "It just made me feel bad ’cause of the fires. She wasn’t going to have a birthday party." Not only that, but the event brought the family together. Kris Jenner remarked, "I can’t think of a better way to recover from all of the fire drama than to celebrate Dream’s birthday."

As Chyna said, Kylie is Dream's aunt, so it's great that they're on such good terms. Otherwise, Kylie wouldn't be able to come through for her niece like she did with the party. While overall it's a good thing that Dream has so many family members who love her, it's even better that they're all getting along.