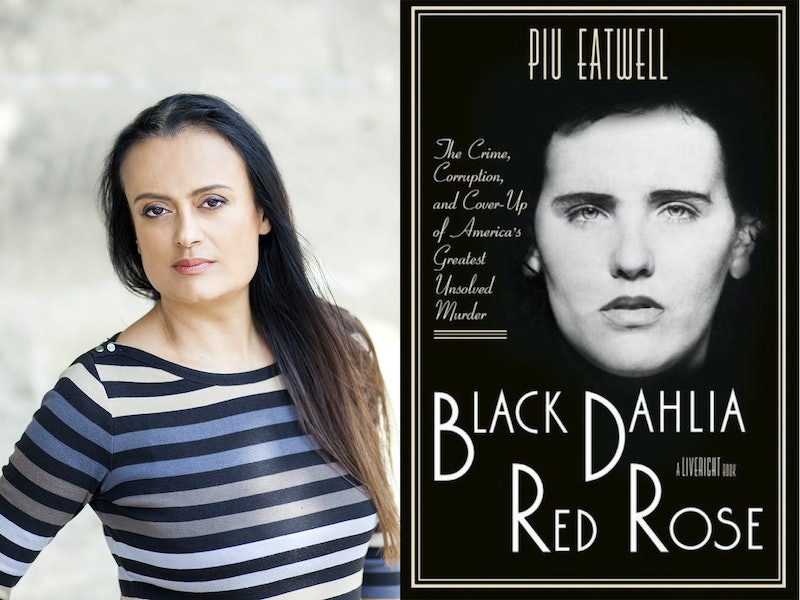 "I'm particularly interested in cases where it's not just a murder or a crime, but there's a whole kind of mythological significance — you know, the murder or the crime suddenly became much bigger in a way than the actual event, and came to represent something," Piu Eatwell, author of Black Dahlia, Red Rose: The Crime, Corruption, and Cover-Up of America's Greatest Unsovled Murder, a new book that claims to have solved the famed 1947 case, tells me over the phone on the October morning of the book's United States release.

Like any true crime obsessive, I know about The Black Dahlia — or at least I thought I did. The unsolved murder of 22-year-old Elizabeth Short in Los Angeles has been a subject of fascination for 70 years. Black Dahlia, Red Rose looks at the story with fresh eyes, going back to the original police documents, grand jury files, and newspaper articles of the time in an attempt to construct a cohesive narrative about the murder and the subsequent investigation.

Short's death is memorable in large part because of its bizarre brutality — please Google with caution — and also because of the pervasive rumors and theories surrounding it. Eatwell's book attempts to mire through the mythology by grounding itself in fact, and, as a result, makes a strong case for the solution she proposes.

To say that this is a book about the The Black Dahlia murder, though accurate, is a bit simplifying — it's also about Los Angeles and Hollywood in the '40s, with a heavy focus on the dynamic between the LAPD and the press. Eatwell first became interested in the story while researching The Manson Family for a documentary project. "I spent a long time in Los Angeles researching that film, and that got me interested in kind of early 20th century Hollywood and crime," she tells me.

In Black Dahlia, Red Rose, Eatwell minimizes the more sensational, gruesome details of the killing (don't get me wrong though, squeamish friends, parts of it are very difficult to read) choosing to instead focus on a compassionate portrayal of the victim. "[The book] is about so many other things — it's about the investigation, it's about the corruption in Los Angeles at the time, the victimization and exploitation of women, the way in which this particular victim was treated, the way she was turned into an image, a kind of symbol of the 'bad woman,' the temptress," she says. Indeed, Eatwell's approach to writing about Short's life stands in sharp contrast the way she was treated by the media, the public, and LAPD following her death.

"There was this moral panic in Hollywood at that point, with hundreds of these women coming in, you know all these girls who want to be [movie stars] leaving home, and this was the beginning of it then," Eatwell says. Short was held up as symbol, a warning about "what happens to women" when they live outside the bounds society has created for them.

Sensitivity in telling Short's story was extremely important to the author, who, in an article for the website Female First, writes, "As a woman writing about the murder of Elizabeth Short, I tried to imagine what it must be like for a 22 year old Hollywood hopeful landing in a strange and frightening city, full of dreams but little in the way of concrete plans. How such a girl might fall into the hands of the wrong sort of people. And I tried very hard not to judge her."

Black Dahlia, Red Rose indeed does put Elizabeth Short at the center of her own story, while still managing to read like a classic noir tale. Eatwell's extensive research pays off in the narrative, which is impressively detailed, even referencing the weather on specific dates.

Although she's now, naturally, a bit of an expert, Eatwell went into the project with no more knowledge than the average true crime enthusiast. She didn't have a theory about who the killer was until she began to research in earnest, a rigorous process that took about three years. After she aquired the official documents and files, she rearranged them into chronological order, interspliced with all the newspaper reports, which enabled her to create a cohesive account.

I won't spoil Eatwell's fascinating conclusion, but I will say that she had me convinced by the end. "[T]he case documents are pretty compelling, and I think it's a story that comes out quite clearly just from reading them," she tells me.

Eatwell reveals that she briefly considered not going through with the book once she began to research the details of Short's murder. "I just thought, I'm not sure I can handle having to read this stuff because it's really so gruesome." But the desire to tell this story and humanize Elizabeth Short won out in the end. "At the beginning when I first started, I did have nightmares about it and I really internalized what had happened [...] And then I think you work through it, so I think there's a sort of cathartic process in writing about these things," she says.

More like this
The 20 Best Audiobooks To Fall Asleep To
By Aoife Hanna and K.W. Colyard
Conversations With Friends' Endometriosis Scenes Are As Brutal As It Gets
By Ivana Rihter
The 43 Best Mystery Books To Read Now
By Morgan Leigh Davies
10 Must-Read New Books Out This Week
By K.W. Colyard
Get Even More From Bustle — Sign Up For The Newsletter