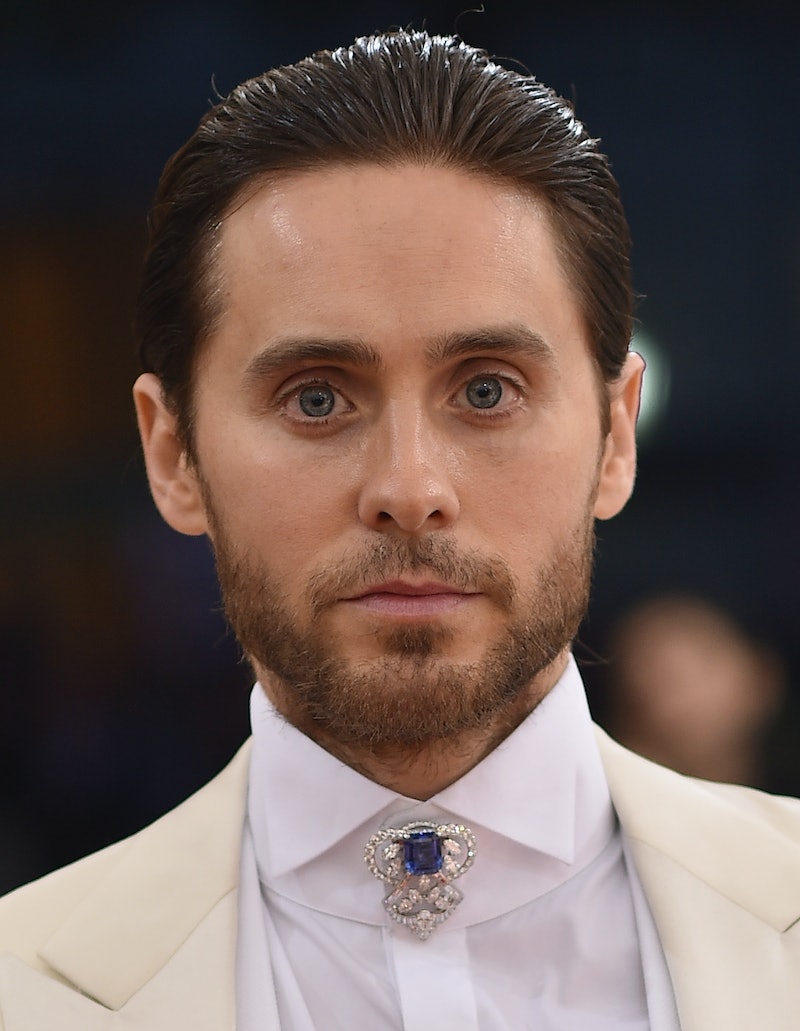 By now, actor, and musician Jared Leto is synonymous with his alternative approach to acting. We've all heard stories of his method acting antics: The bizarre and grotesque gifts he gave his Suicide Squad costars when he played The Joker. How he gave up sex and lost 25 pounds for his role in Requiem for a Dream. The time he gained so much weight for Chapter 27 that he gave himself gout, and so on. For his latest role in Blade Runner 2049, Leto wore sight-restricting contacts to play his blind character, Niander Wallace. And while the actor has weathered a fair amount of criticism and eye-rolling for his less than conventional techniques, he's certain that nothing anyone says could sway him to behave differently.

"It would never affect me and the choices I make as an artist," he says over the phone ahead of Blade Runner 2049's release.

Even so, Leto is not oblivious to the less than savory discourse surrounding his craft. "Obviously, if you see something hateful it can hurt your feelings — unless you're a robot," he says, joking that perhaps he is in fact a non-human replicant from the Blade Runner universe. "But I try to stay away from that stuff. You get to choose what you pay attention to. There's a lot of good in the world. You see it in Houston, Puerto Rico, Mexico. People going out of their way to help other people. I think there are much more important things to focus on."

A quick Google search for Leto elicits a plethora of clicky, sensational headlines ("Lucky Jared Leto claims he's never actually seen Suicide Squad"), playful memes (Jared Leto Hugging Things), and often unflattering photos of the actor on set of his various films in his various transformative roles. But Leto doesn't care how absurd or outlandish he might look on the internet, because he is choosing not to engage in the conversation concerning, well, himself.

"Don't Google yourself ever," he warns. "I don't care if you have three followers or three million — don't do it. That's next to drinking your own pee — something you just don't do... Unless you're in the desert and you're going to die. Then you drink your pee," he says before joking that "Jared says drink your urine" will become the headline of this piece.

For someone who doesn't Google himself, Leto is still acutely aware of the absurdity surrounding his image. He continues: "[The headline] is going to be something stupid like that," he says, before adding: "Just kidding."

Sure, it's a joke, but it's a sentiment that could hold truth. The relationship between the media (the interviewer) and the talent (the interviewee) is a complicated one. And because of the way headlines can sometimes be deceiving, some artists choose their words — an alter their approach to projects — all the more carefully.

But Leto, who just explained the exact scenario in which it's OK to drink urine during an interview about Blade Runner 2049, is not such an individual. As his track record over many years and many films has proven, he will not change his approach or apologize for his methods. And that could be for the best.

After all, Leto is an Oscar-winning actor. His chops have been endorsed by Hollywood's highest form of validation. No matter how he got there — now matter how eccentric or boundary-pushing his methods may be — he is a certified good actor. Blade Runner 2049's director, Denis Villeneuve, compared Leto's audition — in which he wore sight-restricting contacts — to seeing "Jesus walking into a temple."

But this extreme praise is not a given for the actor. It was just announced that Leto will take on the role of Hugh Hefner in an upcoming biopic. An incredibly complicated man, Hefner had a confusing and turbulent history with women. The internet was quick to jump all over the idea of Leto engaging with method acting when it comes to playing the iconic playboy.

Time will tell what Leto does to become the vet-turned-magazine publisher, but one thing is certain: Leto doesn't care what the fans or media has to say about him. He's going to continue to explore new ways to transform into the characters he takes on with every new role — no matter how much you may hate it.

More like this
On 'The Handmaid’s Tale,' Christine Ko Fights Back
By Gretchen Smail
Jinkx Monsoon Is About To Get Real Sketchy
By Sam Ramsden
Lin-Manuel Miranda & Tituss Burgess React To 'Little Mermaid' Casting Backlash
By Radhika Menon
An Extremely Messy Ranking Of What Actually Happens In 'Don't Worry Darling'
By Chloe Foussianes
Get Even More From Bustle — Sign Up For The Newsletter