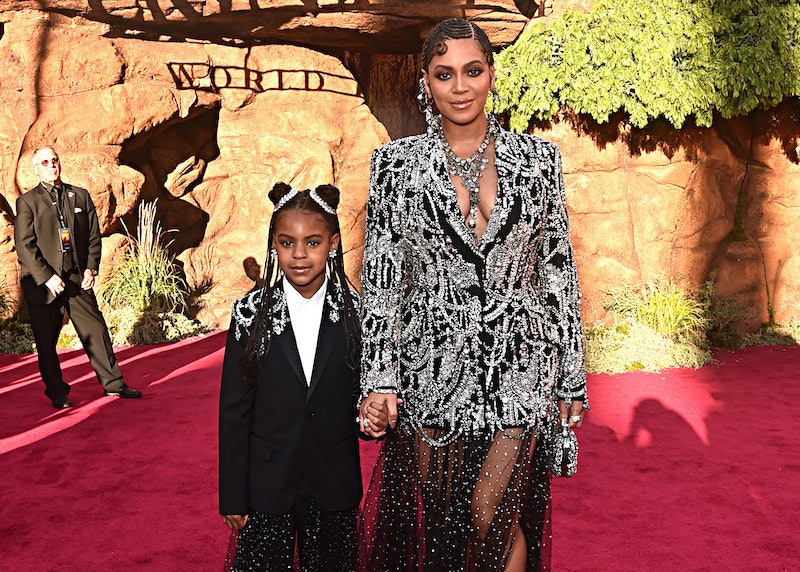 Who run the world? Beyoncé and Jay-Z's 8-year-old daughter Blue Ivy Carter won a 2020 NAACP Image award on Friday, Feb. 21, as reported by Variety. The outstanding duo, group or collaboration honor, which was announced at the 51st annual dinner ceremony in Los Angeles, went to Beyoncé's "Brown Skin Girl" from the 2019's The Lion King: The Gift. Along with Wizkid and Saint Jhn, Blue's vocals are featured on the track, with the eldest Carter sibling singing the line: "Brown skin girl, skin just like pearls, best thing in the world, I'd never change it for anybody else."

Proud grandmother Tina Lawson sent her congrats to Blue in a Feb. 22 Instagram post, writing: "The youngest artist to win a major award Grandma is soo proud of you 8 years old!!! You are giving all the beautiful little brown girls a voice." (Wizkid also became the first Nigerian artist to win the award, per Essence.)

This was but one of Beyoncé's six total 2020 Image awards, including outstanding female artist, album for Homecoming: The Live Experience, and soundtrack/compilation for the Lion King soundtrack. Blue could even claim some credit for some of those awards, too. In addition to appearing in her mom's music video for The Gift's "Spirit," Blue also recorded a version of "Lift Ev'ry Voice and Sing" for Queen Bey's 2019 Homecoming Netflix documentary and live album.

Believe it or not, this isn't even the first time the youngster has had her name engraved on a major trophy. Back in Nov. 2019, Blue won the 2019 Soul Train songwriting award for her contribution to "Brown Skin Girl," which also marked her first appearance on the Billboard Hot 100 chart. Despite the inspiring anthem being the only song listed on Blue's Spotify page, as of Feb. 18, she surpassed 1 million monthly listeners, according to Chart Data.

The Carters of course weren't the only ones to take home awards from the ceremony. Fifteen-year-old Marsai Martin collected four NAACP awards at the Sheryl Underwood-hosted dinner. Among her trophies was one for outstanding breakthrough performance in a motion picture for her starring role in Little. "I feel honored, I feel accepted and I feel seen," Martin said in one of her speeches, according to Variety.

Her ABC comedy series black-ish also joined Ava DuVernay's Netflix miniseries When They See Us in topping the TV categories. Martin and costars Anthony Anderson took home outstanding performance by a youth and outstanding actor awards,respectively, and black-ish also won for outstanding comedy series. In addition to When They See Us topping the outstanding television movie, limited-series or dramatic special category, two of its stars, Niecy Nash and Jharrel Jerome, earned acting honors for their powerful roles. (Additional recipients will be announced during a live ceremony hosted by Anderson, airing on BET and affiliated networks on Saturday, Feb. 22 at 8 p.m. ET.)

If Blue, Marsai, and their fellow NAACP Image Awards honorees are representative of Hollywood's newest generation, the future is looking bright.

More like this
Everything You Need To Know About ‘Black Panther: Wakanda Forever’
By Bustle Editors
‘RHOSLC’ Star Jen Shah’s Arrest & Legal Drama, Explained
By Brad Witter and Jake Viswanath
Beyoncé’s Special Tribute To Sister Solange Was Both Touching & Hilarious
By Stephanie Topacio Long
Mariah Carey Is Releasing Her “Lost” '90s Grunge Album
By El Hunt
Get Even More From Bustle — Sign Up For The Newsletter