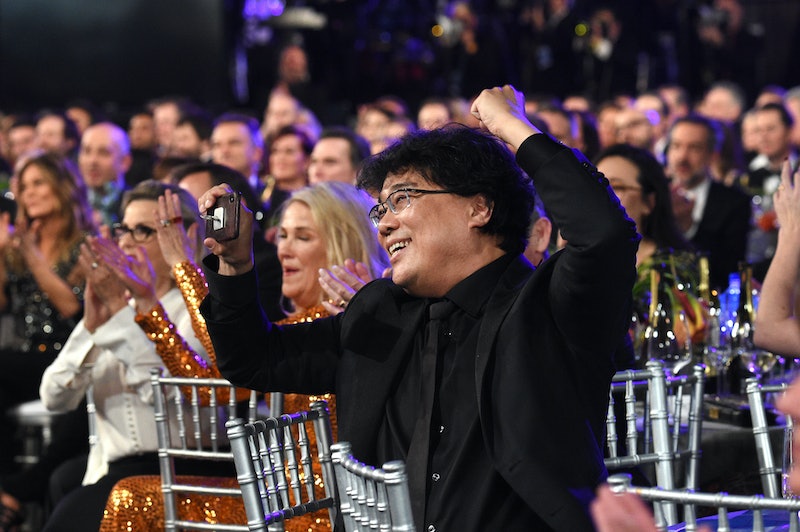 Since its premiere at the 2019 Cannes Film Festival, Best Picture nominee Parasite has become a full-blown phenomenon. And so has the film's director. In addition to co-writing and directing one of the best films of the year, Bong Joon Ho's best awards season moments prove that he's truly revived the Oscar campaign leading up to the Feb. 9 awards.

The 2019-2020 awards season has been a historic one for Bong; he's the first Korean director to win the Palme d'Or at Cannes and to be nominated for a Best Director Oscar. (He is also nominated for Best Original Screenplay and Parasite is up for Best Foreign Film and Best Picture, as well as Best Production Design and Best Editing.) But alongside all of the awards that Bong has taken home this season for his work on the film, the director has also won the hearts of fans everywhere, thanks to his frank and funny reactions to all of the star-studded events he and the cast have attended.

Whether he's advocating for Western audiences to embrace foreign films by overcoming the "1-inch barrier" of subtitles, or filming the Parasite cast from the audience while they accept awards, Bong has approached awards season with a refreshing amount of humor, honestly, and hunger. Here are some of Bong's best awards season moments to look back on that prove he's one of the most relatable Oscar nominees of the year.

When He Cut Off A Cannes Standing Ovation Due To Hunger

When Parasite premiered at the Cannes Film Festival in May, the movie earned both the coveted Palm D'Or and an impressive 8 minute standing ovation from the audience. When the clapping finally ended, Bong simply told everyone, "Thank you. Let's all go home," which, he explained during an appearance on The Tonight Show Starring Jimmy Fallon was because he and the cast were starving.

"The screening was very late night," Bong explained to host Jimmy Fallon, adding that it was "almost midnight" by the time the film ended. "The actors and I were very hungry because we couldn’t eat dinner. We all were saying to each other, ‘We’re so hungry.' ... But the applause never stopped. So finally I said, yeah, ‘Let’s go home.'" Hopefully they all finally got something to eat once the clapping finally died down.

When He Called Out Audiences For Avoiding Subtitles

"Once you overcome the 1-inch tall barrier of subtitles, you will be introduced to so many more amazing films," Bong said with the help of a translator, after winning the Best Foreign Film prize at the Golden Globes in January. "I think we use only just one language, the cinema." Never has a room full of celebrities been so delighted to be burned by a legendary director.

Move over Kris Jenner — there's a new proud parent in Hollywood. When Parasite won the biggest award of the night (Outstanding Performance by a Cast in a Motion Picture) at the 2020 SAG Awards, the camera cut to Bong in the audience, where he was filming Song Kang-ho's speech on his phone with the excitement of a parent watching their children score a goal in little league. Everyone involved in Parasite really is doing amazing this awards season.

When He Shouted Out His Puppy At The Directors Guild Awards

He may not have won an award at the 2020 DGAs, but Bong definitely won the night with his unforgettable speech. Before the winners were announced, all of the nominees were recognized for their work on the years' best films, and during his moment onstage, Bong made time to celebrate the people who really matter. "More than anything else, I'm happy to be here with my family," Bong said, per the Hollywood Reporter. "Also, I really miss my puppy in Korea." (Academy, please let Bong bring his puppy to the Oscars, he deserves it.)

When He Wore This Airport Lewk

Awards season can be grueling — especially when you have to fly from one big event in New York to attend another in London the next day. Thankfully, Bong showed everyone how to travel in style, when a Reddit user shared a photo of him strutting through the airport on his way to the BAFTAs alongside fellow Oscar nominee Taika Waititi, still wearing his suit from the Writers Guild Awards earlier that night.

When He Said He Just Wants To Go Home

After months of traveling the world, attending awards shows, earning praise from A-List celebrities, and the former president of the United States, Bong isn't just missing his puppy, he's tired. So tired, in fact, that he has made no secret of the fact that he can't wait to head home the second he can and get back to his normal life. "I need to pack. I want to go home as soon as possible," Bong told the audience at a Film at Lincoln Center event recently, when asked what he plans to do after the Oscars. Honestly, who can blame him?

The awards season can be an exhausting time, but, for the Bong Hive, it's been nothing but fun.

More like this
14 Women To Watch This Oscar Season
By Marina Watts
Paul Mescal, Man Of Mystery
By Samantha Leach and Heather Hazzan
Olivia Wilde Addresses *Those* Florence Pugh & Shia LaBeouf Rumours
By El Hunt and Sam Ramsden
Here’s Everything Coming To & Leaving Netflix In October
By Jake Viswanath
Get Even More From Bustle — Sign Up For The Newsletter