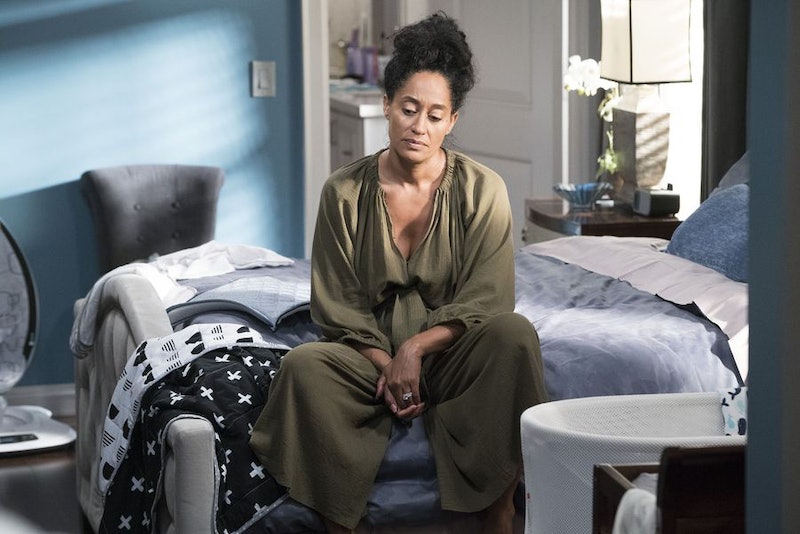 black-ish has never been afraid to bring up big topics, but usually wraps them up in a single episode. But the Oct. 10 episode brought up an important exception: Rainbow's postpartum depression on black-ish is a jumping-off point for all of the characters to talk about the challenges of becoming a new parent, even if it's for the fifth time — and it even takes the time to look at how treating Bow's depression will be a process that includes several different methods, rather than simply stopping after acknowledging that this condition exists. Because for many women, getting diagnosed with postpartum depression isn't the end of their story; and while the episode finds a nice endpoint and a slight upswing for Bow, she's certainly not back to the supermom and super-surgeon she is in the typical black-ish episode. She's still struggling, and the series isn't afraid to get overtly dramatic in places while depicting that struggle.

Throughout the episode, Bow isn't exactly easy to deal with, with her persistently dark mood totally different than the demeanor that the audience (and the Johnsons) are used to. Dre's usual callousness is expected, but his rudeness stings, with Bow's new therapist specifically calling him out for being insensitive and emphaszing that Bow needs to choose the best way to treat herself. It might not sound like comedic gold, but it is a way to make light of the problem without discounting the real pain parents go through when they struggle to "bounce back" from a new baby immediately.

Some of the considerations of actual mothers, like wanting to both take medication to address their depression and, potentially breastfeed, make it onto the show. And while Dre has always been the protagonist of black-ish, all of the time spent developing Rainbow Johnson, and her driven perfectionism really pays off in one explosive confrontation between Bow and Ruby that really drives home the episode's themes. Bow is determined to breastfeed, even if the stress of doing it "right" is contributing to her postpartum depression, so when Ruby takes advantage of her daughter-in-law's low mood to feed DeVante formula, Bow has to insist that Ruby move out.

And for what may be the first time in series history (give or take a few minor moments) Dre actually chose Bow over his mom, asking Ruby to leave in compliance with Bow's wishes. Because one of the big themes of this episode, and what distinguishes it from other times this issue has occasionally been floated on other sitcoms before, is that Bow recovering and bonding fully with baby DeVante will be a process, and one that will require the whole family to listen to and respect her needs. That's even echoed in the very silly subplot about how the kids try chipping in around the house. The results, of course, are ridiculous, from Junior wandering around shirtless to Jack's babyproofing sending Pops into a tailspin, but while each Johnson may not have received the task best suited to their individual skillset, they're all chipping in and helping to boost Bow.

No easy laughs are scored by calling Bow "crazy," and at the end of the episode she doesn't choose to no longer take medication and just "power through" on her own. Bow even tells her older kids about her postpartum depression, taking the time to explain what's been going on. And as she says, "This is just something that happens to moms... it's just a really crappy part of life." black-ish doesn't try to imply that her depression is any more or any less than just a fact of life, and accepting that it's crappy is one step on the road to recovery.