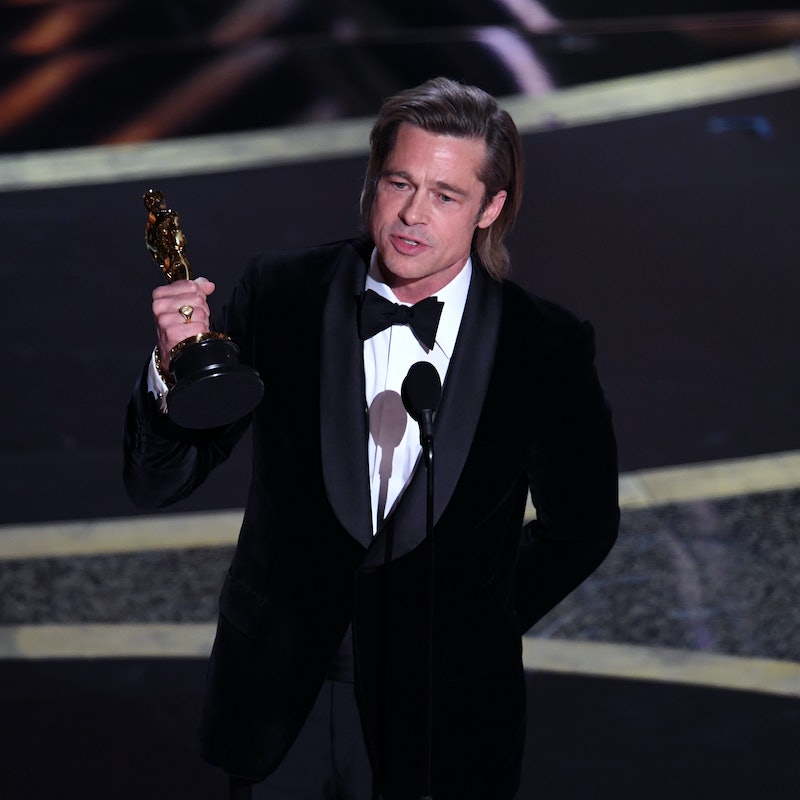 On the Oscars red carpet, Pitt told Variety that he had "many funny friends" who have been helping him out "with some laughs," including comedian Jim Gaffigan and Bob Oschack. But his most unexpected co-writer was famous director David Fincher, who worked with the actor on Fight Club “My man Fincher, we trade barbs every week,” Pitt said.

The actor has been taking home Best Supporting Actor trophies for his role as Cliff Booth in Once Upon a Time in Hollywood at virtually every award show, resulting in his huge Oscars win. And while backstage at the big show, Pitt explained that he decided to write his speeches in advance due to his anxiety about public speaking. “I know that sounds antithetical, given the profession I’ve chosen, but that’s not necessarily my thing,” he said. “So this round, I figured if we were going to do this, I’d put some real work into it and try to get comfortable, and this is a result of that. I’m definitely writing.” Stars, they're just like us!

The help is paying off. Pitt's acceptance speeches have been a hit, filled with hilarious barbs tailor-made for the occasion. At the Golden Globes, he told co-star Leonardo DiCaprio that he "would've shared the raft" with him, referencing the Titantic conspiracy theory that Rose had enough room on the door for Jack. At the SAG Awards, he joked that he'd put the win on his Tinder profile. When asked in the press room if he would update his profile again after the Oscars, he coyly responded, "You'll just have to look it up."

He even jabbed at Prince Harry and Meghan Markle's royal exit in his BAFTAs speech, read by co-star Margot Robbie. “He says that he is going to name this Harry — because he is really excited about bringing it back to the States with him,” she said, holding up Pitt’s trophy. "His words, not mine."

At the Oscars, Pitt went political, joking that director Quentin Tarantino should make a movie about Trump's impeachment trial. He also referenced former White House National Security Adviser John Bolton, who was not allowed to testify at the trial, saying, "They told me I only have 45 seconds up here, which is 45 seconds more than the Senate gave John Bolton this week." Clearly, from now on, no award show should have a time limit anytime that Pitt speaks.