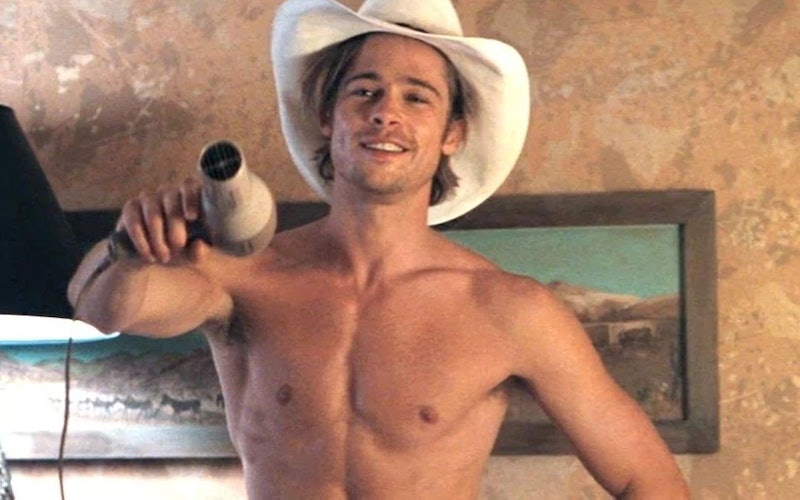 It's hard to imagine anyone else playing the role of J.D. in Thelma & Louise, but apparently Brad Pitt almost didn't win the coveted part. As Vulture reports, according to a new book by Becky Aikman called Off the Cliff: How the Making of 'Thelma and Louise' Drove Hollywood to the Edge, several other Hollywood actors were considered for the part — and none other than Robert Downey Jr. almost played J.D. in Thelma & Louise.

Apparently selecting an actor was an extremely difficult task for the movie's casting directors, as J.D. needed to be both charming and attractive enough in order to seem convincing. As his role involves tricking Susan Sarandon and Geena Davis out of their money, whoever played J.D. also had to be wily and conniving. While William Baldwin was initially cast in the role, he chose to take a part in Backdraft instead. In the new book, Aikman writes,

"The J.D. contenders mostly fell into two camps. Some adopted the spikey, tousled hair and winning charm of star of the moment Tom Cruise, while others went for the more retro effect of a shuffling, mumbling James Dean. Most feel short."

Clearly, finding an actor that embodied all of J.D.'s many characteristics proved hard. But eventually, Downey Jr. came up as a possibility, despite already being famous in his own right. According to Aikman's new book, the Iron Man actor's agent allegedly tried to broker him a role in the film, with Downey Jr. prepared to "take it for whatever we have in the budget." Basically, he was more than ready to sign on for the film, and take a potential pay cut, too.

But, as we all know, he didn't get cast. Ira Belgrade, an assistant casting director on Thelma & Louise, is quoted as asking about Downey Jr., "Isn’t he too short? Next to Geena?" and director Ridley Scott was apparently not totally on-board with the potential casting. So Downey Jr. didn't get the part, and the rest is history, with Brad Pitt's audition allegedly making Geena Davis incredibly flustered, signaling the immense chemistry audiences would soon see between the pair.

It's hard to imagine anyone but Pitt as J.D., especially as the role launched the actor's Hollywood career in a big way. If anyone could compete with Pitt, though, it's Downey Jr., but his own career doesn't seem to have suffered as a result of not being cast in Thelma & Louise.

More like this
Reese Witherspoon Confirms This Fan Favorite Will Return For 'Legally Blonde 3'
By Jake Viswanath
Taylor Lautner Copped To Finding Jacob "A Little Annoying" In Twilight
By Stephanie Topacio Long
James Cameron May Come To Regret His 'Titanic' Door Experiment
By Stephanie Topacio Long
Alicia Silverstone Revives Her 'Clueless' Character In This Super Bowl Commercial
By Jake Viswanath
Get Even More From Bustle — Sign Up For The Newsletter
From hair trends to relationship advice, our daily newsletter has everything you need to sound like a person who’s on TikTok, even if you aren’t.