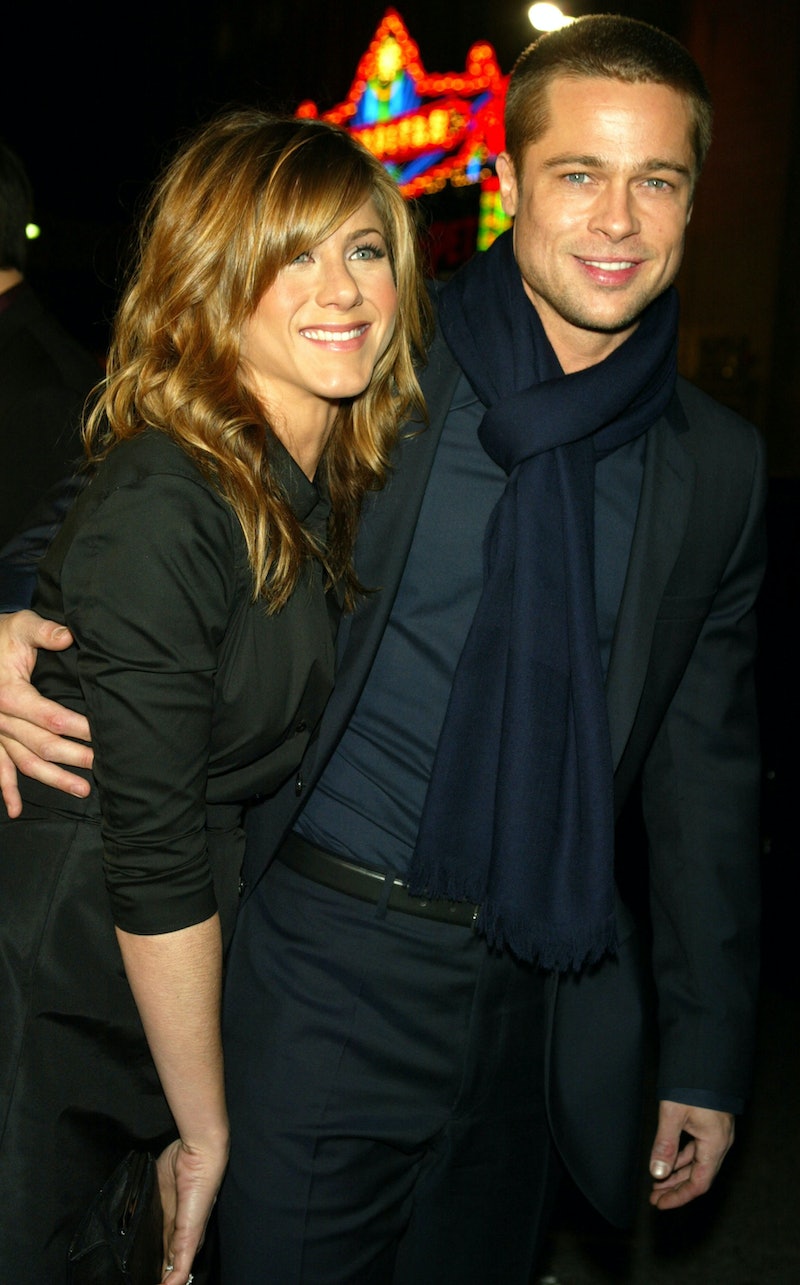 Even though they got divorced nearly 14 years ago, this is one celebrity couple people just can't stop wishing will reunite. Hopefully the romance speculation can finally be put to bed once and for all. Brad Pitt responded to Jennifer Aniston dating rumors and his answer speaks volumes about the former married couple's current status.

In a video obtained by Entertainment Tonight, paparazzi spotted Pitt walking to his car in Los Angeles on May 3 and asked the actor, "I gotta ask you, everyone wants to know, are you and Jen getting back [together]?" The Once Upon a Time in Hollywood star appeared to be totally caught off guard by the question, and understandably so. He replied, by literally laughing and saying,

The Academy Award winner then politely said to the paparazzi,

Based on his response, Pitt can't believe he was asked that question after all these years. He was married to Aniston from 2000 to until 2005. It's been well over a decade since Pitt and The Morning Show star called it quits, so it's ridiculous that people are still latching onto the idea that the two will reunite, let alone inquiring about whether or not a romance is brewing simply because he reportedly attended Aniston's 50th birthday party.

That's right, the most recent dating rumors first came about when Pitt was spotted at the former Friends actor's celebration for her milestone birthday in February, as reported by People at the time.

Seeing as Pitt is no longer with Angelina Jolie (they announced their divorce in September 2016) and Aniston and Justin Theroux broke up (they split in February 2018), it's convenient for people to want Aniston and Pitt to reconcile. However, the two getting back together doesn't seem likely.

For example, after Pitt reportedly attended Aniston's birthday party, a source told People, "Brad and Jen have a very civil relationship. He would not have been asked to come if that weren’t the case. It was a big night for Jen." The source added, "The important people in her life gathered to celebrate with her. Brad fits into that group, and it was natural that he would want to come."

Last February, ET also reported that following Aniston's split from Theroux that she was "absolutely not" dating Pitt again. However, a source also told the outlet at the time, "They have each others cell phone numbers and communicate from time to time. This is nothing new. Jen and him [Brad] have remained friendly."

If that isn't enough, in a recent interview with Harper's Bazaar that was published on May 7, Aniston admitted she doesn't have time to date. After her First Ladies costar Tig Notaro asked her if she was on OkCupid, Aniston replied,

"Am I on OkCupid? No. I have zero time, to be honest. My focus has been on the show, so dating has not been one of my first priorities. I feel like whatever [romance] looks like, it will present itself, and it’s not about seeking it out, you know?"