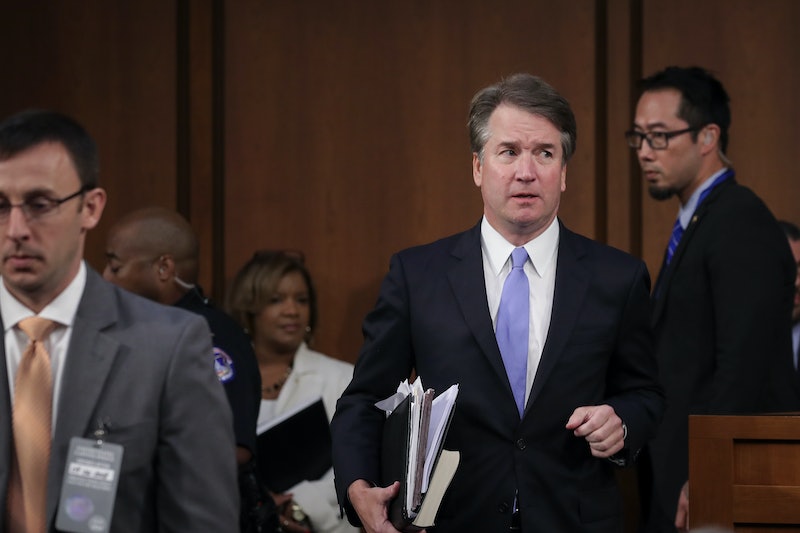 During the third day of his Senate confirmation hearings, the topic of Brett Kavanaugh's assault weapons ban dissent was brought up more than just once. Seven years after he initially wrote the dissent, which argued that a specific ban on assault weapons was unconstitutional, Kavanaugh was willing to stand by his argument once more. Even more surprisingly, he ventured to argue that gun laws have more to do with legal precedent than common sense.

The conversation occurred when Sen. Dick Durbin brought up Kavanaugh's 2011 dissent, which argued that a ban on assault weapons (specifically, a ban on semi-automatic rifles and high-capacity magazines) was unconstitutional. Durbin said, "I have a granddaughter who's going into the second grade, and she came home from school last year to tell her mom that there had been an instruction from a teacher about what to do if a shooter came into her school. ... You laid out your response to gun laws in a D.C. circuit court Heller case. ... Judge, I'm not aware of any circuit that follows your test, the history and tradition test."

Durbin continued, "In this situation, it's a life or death test. Whether it's an assault weapon, or the person who can buy it, I need to know how you can reconcile your position with your opening statement to this committee, [where you mentioned] the rule of common sense."

In response, Kavanaugh said, "It's all about precedent."

Durbin then went on to say to Kavanaugh, "The Second Amendment is not a suicide pact. We ought to make America safe. ... I would just say to parents who are worried about gun safety, why do you set yourself aside from the mainstream in your thinking on this?"

"Because I read the precedent of the Supreme Court as best I could," Kavanaugh answered, then went on to reassure Durbin that he is "very aware of the real world consequences."

She said, "I think we're on totally different wavelengths ... assault weapons are not common use."

Kavanaugh then added, "I was trying to follow strictly and carefully the Supreme Court precedent."

Feinstein went on to argue that sheer numbers of ownership should not define "common use," saying, "Common use is an activity ... it's a use. So what you said is these weapons are commonly used. They're not."

The question of Kavanaugh's views on the Second Amendment has been of paramount importance during his Senate confirmation hearings: In the last year, there have been over 20 school shootings, according to CNN. That averages out to around one shooting a week — and that doesn't include the hundreds of other gun-inflicted deaths that occur every year in the United States.