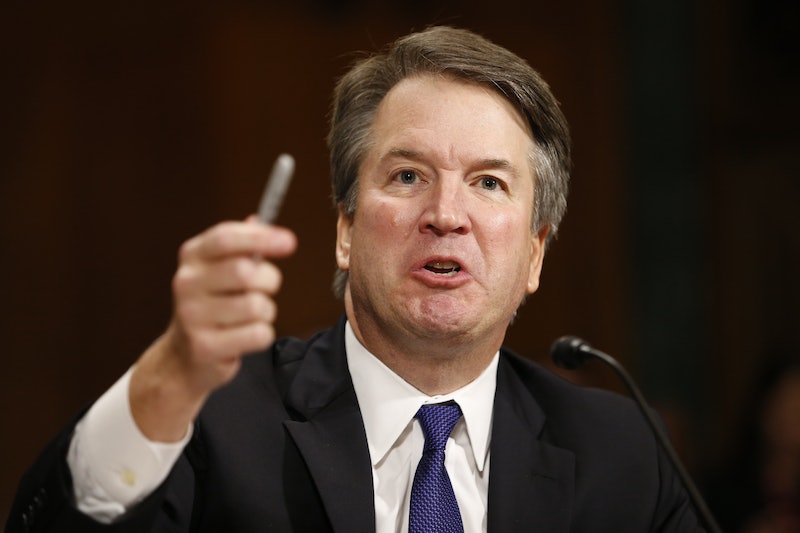 More than 10 days after Christine Blasey Ford came forward about her sexual assault allegation against Brett Kavanaugh, the Supreme Court nominee testified before the Senate Judiciary Committee once again, launching a heated defense of himself and his career. During the hearing on Thursday, Kavanaugh denounced all of the allegations against him as an attempt at "character assassination," and appeared more emotional than many had previously seen him. In fact, Kavanaugh's body language during the hearing — particularly the anger he appeared to express — was an evident display of his emotions, experts say.

In his opening remarks on Thursday, Kavanaugh claimed multiple times that the sexual assault allegations brought against him by Ford and two other women — all of which he has denied — have destroyed his "family and good name." Kavanaugh was clearly angry at certain moments, and overcome with emotion at others. According to Laura Dudley, a clinical professor and behavior analyst at Northeastern University, Kavanaugh's behavior during his opening remarks — from his apparent yelling to his furrowed brows — seemed to "reflect underlying anger."

"If you were watching a video of Brett Kavanaugh's remarks and paused it at any time, you likely ended up with a still photo of him in an angry or tense pose on your screen," Dudley tells Bustle.

Dudley also points out that Kavanaugh used many imperative phrases — such as "think about that fact!" and "listen!" — to make his arguments, which Dudley says posed a "stark contrast to Dr. Ford's testimony." But these were not the only emotional responses in which Kavanaugh engaged during his remarks, according to Dudley.

"His eyes were watering, his voice shook, and his chin trembled," Dudley tells Bustle, adding that body language can be deceptive. "Though we can't know for sure if this was deliberate or not, these may have been unintentional responses to the emotions he was feeling as he read his testimony. We saw these behaviors at times you might expect, such as when he spoke about his family. We also saw these behaviors at unexpected times, such as when he spoke about an unrelated event on his calendar."

This body language was not only in contrast to that of Ford's, as Dudley pointed out, but also to Kavanaugh's own body language earlier this week, when he and his wife, Ashley, sat down for an interview with Fox News' Martha MacCallum. Refinery29's Natalie Gontcharova described that interview as "largely friendly," and body language expert Patti Wood told Gontcharova that Kavanaugh "controlled what was happening."

Experts suggested to Refinery29 that at most, Kavanaugh displayed some anxiety over the accusations he faced. But what experts gleaned from his body language that day and described to Gontcharova was nonetheless quite different from what they drew from his emotional responses during Thursday's hearings.

Wood tells Bustle that it is important to be cautious in assessing Kavanaugh's body language, as "we don't yet know if he is guilty of any of these charges." Wood also points out that Kavanaugh "could be innocent," though she believes that Kavanaugh's wide range of emotional responses during Thursday's hearing was significant.

"His extreme emotions and inability to control his anger, rage, contempt, and tears is revealing," Wood tells Bustle. "I have analyzed dozens of congressional hearings and I have never seen this broad range of emotions or this intensity."

Kavanaugh's tears, especially, were a point of interest for Wood, who says that such emotions "can certainly call forth empathy."

"The tears are real, but here is what we don’t know — tears can show that he is absolutely innocent, but I have seen in my work throughout the years, people that are 'caught' cry because they feel like victims of circumstances," Wood tells Bustle. "Tears, laughter, and anger are what we call in deception detection the 'Cover Emotions' — the emotions that cover up their untruths."

Both Wood and Dudley say that Kavanaugh's emotions and body language cannot, on their own, provide a clear indication of whether or not he was being truthful during the hearing. However, Dudley notes that Kavanaugh likely was sincere in his anger.

Whatever the reason behind Kavanaugh's anger, the emotional range that he displayed during his hearing has also been a prominent subject of discussion on social media, with many Twitter users speculating about what his body language could mean. Some social media users compared Kavanaugh's body language to Trump, while others compared his behavior to his alleged past aggression, which Kavanaugh has denied.

But despite the controversy and backlash surrounding Kavanaugh, especially following Ford's testimony, Vox reported that the Senate Judiciary Committee is still planning to vote on Kavanaugh's nomination on Friday.