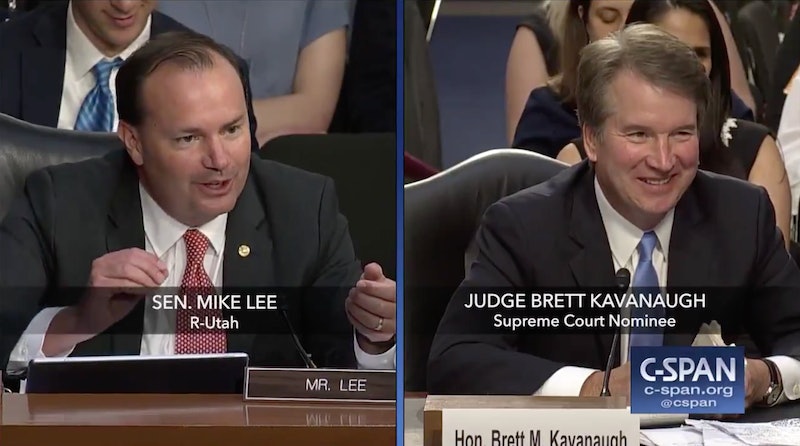 This week's SCOTUS confirmation hearings have been marked by contentious debate and angered protests, but Thursday brought a lighter moment too. Aware that the nominee was taking copious notes during his hearing, Utah Sen. Mike Lee asked about Brett Kavanaugh's Sharpie marker notes — and if you've been watching the hearing, you may have had the same question.

"I notice that you take a lot of notes, and I respect that, because I can tell you’re paying close attention," Lee began. "You use a Sharpie, and it’s not a fine-tipped sharpie, it’s a regular sharpie, that might smudge." In C-SPAN's video coverage, Kavanaugh chuckled. "Why do you prefer that pen?" Lee continued. "I'm just dying of curiosity."

Kavanaugh's answer was succinct. "So I can see it," he laughed, along with others in the hearing room. "It’s nothing scientific."

Evidently, that was all Lee needed to know. "That is a perfect mic drop moment," the senator said, before ceding the rest of his time to the committee.

Twitter users had apparently been wondering the same thing leading up to Lee's question, and even had their own theories on Kavanaugh's pen choice. "A nice thing about taking notes in Sharpie is you can fit about four words per page and they bleed through to the next page too, so you’re pretty much constantly having to flip pages, and this gives the impression of taking meticulous notes even if you’re barely paying attention," James Hamblin, a writer at The Atlantic, tweeted.

Others found Lee's question to be frivolous. "We may be close to or beyond 24 hours of questioning of Judge Kavanaugh and you can tell senators are running out of questions," Byron Tau, a Wall Street Journal reporter tweeted. "Mike Lee asks why he takes notes with a Sharpie."

"It almost feels like an SNL skit, but it’s not," another user commented.

Still others see the question as a Republican attempt to make Kavanaugh appear relatable. As a foil to the hard-hitting questions being asked by Democratic senators at the hearing — everything from abortion rights, to executive power, to affirmative action — Republicans have taken opportunity to humanize Kavanaugh to the public.

On Tuesday, the first day of hearings, Republicans invited Kavanaugh's college roommate and a parent of one the kids on the basketball team Kavanaugh coaches. On the other hand, Democrats had invited a Parkland shooting survivor to highlight gun control legislation, and a child with a degenerative disease to underline a need for the Affordable Care Act, according to ABC. The same day, Arizona Sen. Jeff Flake spent several minutes discussing hobbies and common interests with Kavanaugh, including playing football in high school and Kavanaugh's marathon-running experience.

During hearings on Wednesday, Sen. Orrin Hatch praised Kavanaugh while joking about how the judge enjoys eating his pasta with ketchup. "You are the sort of person many of us would like to have as a friend and colleague," Hatch said. "You also apparently like to eat pasta with ketchup. But nobody is perfect." And while Democrats see Kavanaugh's carefully humanized "carpool dad" identity as irrelevant to the hearings, at least senators and spectators alike can rest a little easier knowing just what the Sharpie was for.