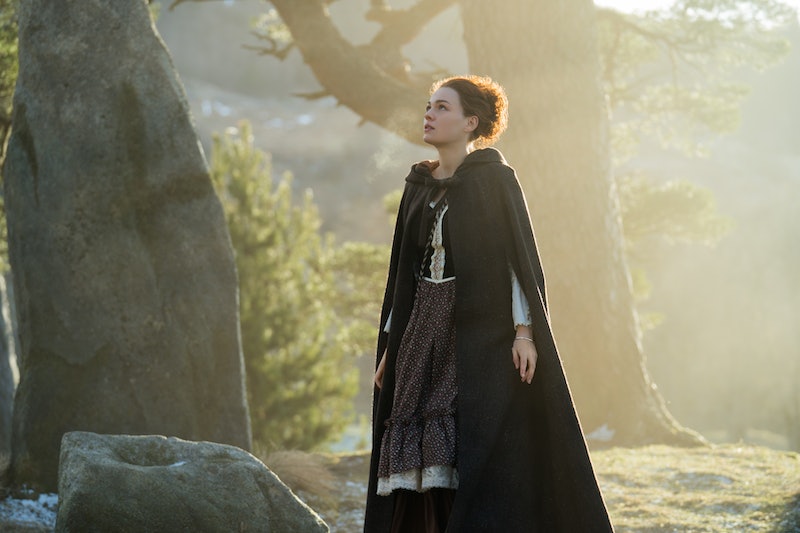 TV has a rape problem, and Outlander is not immune. Though consistently praised for its feminist sex scenes, each season of the series has featured rape — and even more often, the threat of sexual assault — treating the subject with varying degrees of sensitivity. In fact, rape is such a permanent part of Outlander's DNA that it caused Roxane Gay, in a review of the series, to wonder if "the show's writers are capable of telling a story without violence at its center." Which is why it's so important, Sophie Skelton tells Bustle, that Brianna's rape on Outlander was, and will continue to be, handled with care.

Earlier in the season, Brianna time-traveled from her home in the '60s to the 1700s in an attempt to save her parents, Jamie and Claire, who she'd learned would die in a tragic fire. During her quest to find them in the Dec. 23 episode, she runs afoul of Stephen Bonnet, a ruthless pirate who views everything and everyone as his property. When she tries to buy her mother's wedding ring, which he'd previously stolen from Claire during a vicious confrontation, Bonnet rapes her. Notably, the act itself isn't shown — a departure from Outlander's previous approach, and even from what writers had initially planned.

"We did actually film the whole rape scene, but then the writers decided to show it behind closed doors," Skelton says over the phone, explaining that the show's team was influenced by the #MeToo movement. "I think because it's a conversation of today and because rape has been quite prominent in shows. I think that Outlander wanted to make sure they were showing that they are sensitive to that, but obviously without disregarding it completely."

This differs from Jamie's rape at the end of Season 1, which was depicted so graphically that it was nearly unwatchable. Instead, we see Bonnet begin to physically overpower Brianna, and then the camera cuts to the tavern where his men are drinking and playing cards, their faces blank. All are seemingly oblivious to — or more chillingly, callously unconcerned with — Bree's heartbreaking cries for help.

By turning the camera not on the act itself, but on the faces of the men who stood by and allowed the violation to occur, Outlander uses this moment to highlight how those who turn a blind eye to sexual violence are themselves complicit — a choice surely influenced by ongoing conversations regarding the bystander effect and rape culture.

"Showing the reaction on the faces of the men was something [the writers] wanted to use as the harrowing moment as opposed to what's happening inside the room," Skelton says. "I think [the writers] wanted to show... obviously the #MeToo movement now is talking about how people did sort of turn their heads to what was going on."

That being said, Jamie and Brianna's stories will have one key thing in common: just as it did with Jamie, the series will delve heavily into the Post-Traumatic Stress Disorder that stems from Brianna's assault. This, Skelton says, is what helps Outlander bypass TV's problematic tendency to use rape as little more than a plot device.

"I think one thing Outlander has always done well is make sure that you don't just see rape and then it's gone," Skelton continues. "You really follow the character through." In Briana's case, that means showing the reality of her trauma on-screen. In the episode following her assault, the upcoming "The Birds & The Bees," we see Briana flinch from a sudden touch, become intermittently numb and withdrawn and then suddenly emotional, blame herself for her own rape, and generally struggle to grapple with the horrific violation she endured.

But as important as it was for Skelton to accurately portray what happens after assault, it was just as crucial that Outlander not ignore the realities of sexual violence in the 18th century — something that would be a disservice to the women who lived it.

In the end, Skelton hopes that by focusing on Brianna's trauma and her recovery, rather than the rape itself, Outlander can pave the way for nuanced and meaningful portrayals of sexual assault on television. "I think [the writers] do a good job of making sure that [the storyline] almost does justice to someone who's been through it," she says, "because I think seeing what Brianna goes through will hopefully show women that there is a light at the end of the tunnel."

In spite of all the past criticism, perhaps now Outlander can be an example for how TV can handle the depiction of rape responsibly, with all of the pain, trauma, and sensitivity that the issue — and most importantly, survivors — deserve.

More like this
At 28, Rosie Perez Risked Her Career To Stop Playing Stereotypes
By Gabrielle Bondi
At 28, Debra Jo Rupp Was Living A Much Different '70s Show
By Grace Wehniainen
Zach Reveals The Chaotic 30 Minutes That Were Cut From ‘The Bachelor’ Premiere
By Grace Wehniainen
'That '90s Show' Star Callie Haverda Got Advice From Mila Kunis & Ashton Kutcher
By Brad Witter
Get Even More From Bustle — Sign Up For The Newsletter
From hair trends to relationship advice, our daily newsletter has everything you need to sound like a person who’s on TikTok, even if you aren’t.