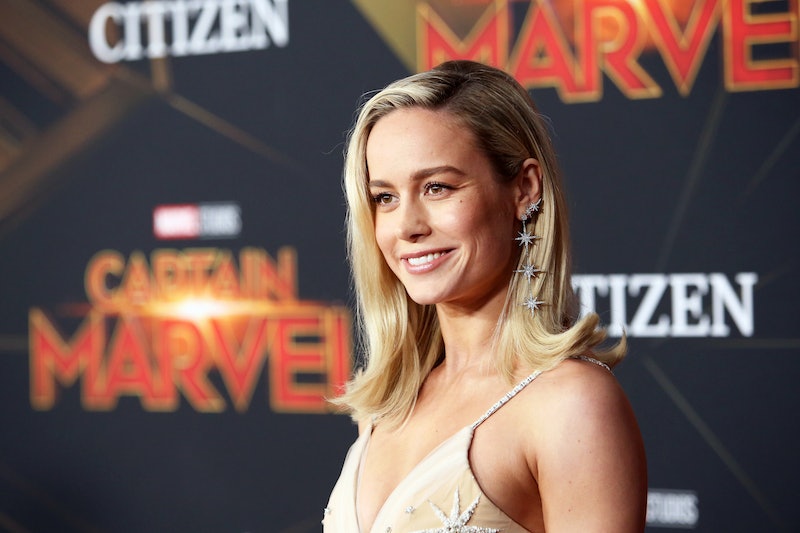 Captain Marvel might be all about the female-led rock music, but the actor who plays her has tastes that run decidedly more pop. On Saturday, May 4, Brie Larson posted a cover of Ariana Grande's "My Everything" on her Instagram Story, because she's truly the biggest Arianator fan in Hollywood.

The Oscar winner noted that she's an "@arianagrande stan forever," in her video of her playing the guitar, rocking an oversized hoodie and sweatpants. Despite her clear talent for playing, Larson noted that the guitar and amp was on loan from a friend of hers, joking "I guess I should get my own soon." (After this cover goes viral, we're sure fans will be clamoring for even more videos of Larson performing, even if, as she explained later in the video, the guitar is "not in the right key.)

Near the end of the clip, the Avengers star also thanked Grande for "having the most fun songs to sing," tagging the singer in her gushing posts. The love seems to be mutual, as Grande responded to Larson's video by reporting the video to her own Instagram Story, and adding a teary-eyed emoji, along with a giant heart.

This is far from the first time that Larson has shared her love of Grande's music; in March, the Oscar winner sang "7 Rings" during an episode of "Carpool Karaoke" with her Captain Marvel costar Samuel L. Jackson, complete with elaborate car choreography.

After the clip of her singing "7 Rings" blew up on social media, Larson confirmed her stan status after a Twitter user asked, "did you really know every word to 7 rings or are you just amazing at reading prompters?" Larson responded, "I know every word and every run don’t @ me," proving that when it comes to Grande's music, Larson doesn't mess around.

Of course, the pop star wasn't the only musician that the Oscar winner impressed with her "Carpool Karaoke" segment. After belting out No Doubt's classic, "Just A Girl" — which plays a pivotal role in the 1990s-set Captain Marvel — Larson earned praise from Gwen Stefani herself, who shared a clip of the actor's performance on Twitter. "This is just ridiculously amazing @brielarson @SamuelLJackson #justagirl #CaptainMarvel 😳🍀👌🏻🤸🏻‍♂️" Stefani wrote.

Though fans and musicians are, naturally, impressed by Larson's pipes, her musical talent isn't actually much of a secret, as before she was an acclaimed actress starring in blockbuster films, Larson had a short-lived career as a pop star. In 2005, she released her debut album, Finally Out Of P.E., and toured with Jesse McCartney to promote her single, "She Said." In an interview with MTV News, Larson explained the title of her album, saying, "When I found out that I got a record deal, I knew that I was finally gonna be able to be homeschooled, and I was like 'Yes! I’m finally out of P.E.'"

"Today, I would say music is, like, the coolest thing ever, but if I get a feature film tomorrow then acting would be the one," Larson told MTV at the time, though in the years since, it seems that her focus is firmly on her acting career. And while she hasn't overtly discussed her time as an aspiring pop star, Larson has often spoken about the ways her time as a teenager in the industry affected her. "I had started acting when I was 7, and I was always wrong," she said during a Hollywood Reporter roundtable in 2015.

"I would always get to the very end [of the audition process], but I wasn’t a perfect package of one thing. I wasn’t a cliche, and it always worked against me. I wasn’t pretty enough to play the popular girl, I wasn’t mousy enough to be the mousy girl, so I never fit in. And so I’d get close, but I never got anywhere, and it was really painful."

While it seems unlikely that Larson will ever release another album, at least fans can hope that she'll continue to show off her musical talents onscreen — and maybe, just maybe, she'll even collaborate with Ariana Grande one day.