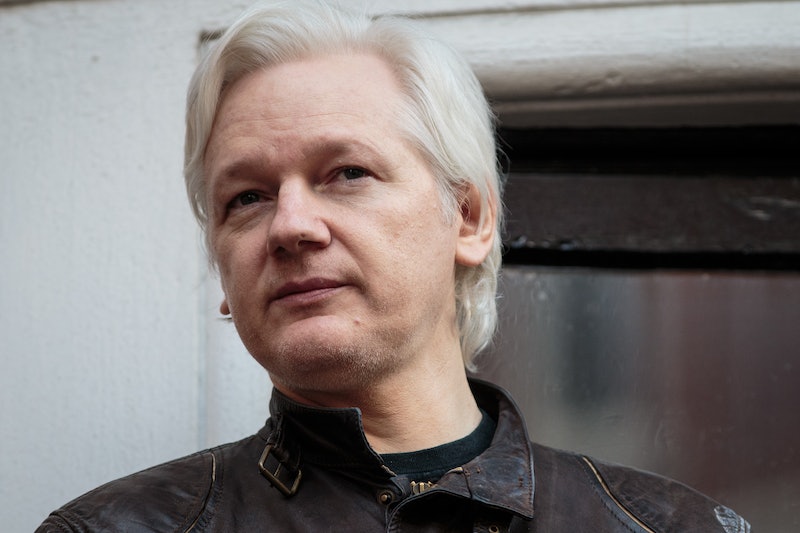 The WikiLeaks founder who's been living in the Ecuadorian embassy in London for seven years no longer has diplomatic asylum. British police arrested Julian Assange Thursday morning after Ecuador withdrew his protection because he was “repeatedly violating international conventions and protocol of coexistence,” President Lenín Moreno said on Twitter. The British police said he was arrested for breach of bail in the United Kingdom and on behalf of the United States authorities.

Assange first holed up in the embassy in 2012 when he faced a sexual assault investigation in Sweden. The WikiLeaks founder denied the allegations, and Sweden dropped the case in 2017. But while the investigation was ongoing, it was possible that Assange getting arrested in Sweden would lead to him being extradited to the United States, where he was wanted for leaking classified government documents provided by Chelsea Manning in 2010.

When the Swedish case was dropped, the UK said Assange was still wanted for failing to appear in court, which the BBC reported is punishable by up to a year in prison. British authorities celebrated the arrest on Twitter on Thursday, writing that "no one is above the law" and thanking Ecuador for its cooperation.

“Julian Assange is no hero and no one is above the law,” Jeremy Hunt, Britain’s foreign secretary, tweeted. “He has hidden from the truth for years.”

WikiLeaks said on Twitter last week that it learned Ecuador had an "agreement with the UK" for Assange's arrest. Once he was in custody, the Twitter account posted that Ecuador had "illigally [sic] terminated Assange political asylum in violation of international law."

The United Nations previously urged the UK to allow the WikiLeaks founder "to walk free" from the Ecuadorian embassy.

“States that are based upon and promote the rule of law do not like to be confronted with their own violations of the law, that is understandable," the United Nations Working Group on Arbitrary Detention (WGAD) said in a 2018 press release. "But when they honestly admit these violations, they do honour the very spirit of the rule of law, earn enhanced respect for doing so, and set worldwide commendable examples."

UK police confirmed after Assange's arrest that he was apprehended "on behalf of the United States authorities" who were seeking his extradition, CNN reports.

"Julian Assange, 47, has today, Thursday 11 April, been further arrested on behalf of the United States authorities, at 10:53hrs after his arrival at a central London police station," the police statement read, per CNN. "This is an extradition warrant under Section 73 of the Extradition Act. He will appear in custody at Westminster Magistrates' Court as soon as possible."

The Justice Department then announced that Assange had been charged in a computer hacking conspiracy for allegedly agreeing to break a password to a classified U.S. government computer. His extradition will be handled by the Office of International Affairs.

In 2017, President Obama commuted Manning's sentence for providing WikiLeaks with the government information about the army, but she was arrested earlier this year for refusing to testify about WikiLeaks before a grand jury.