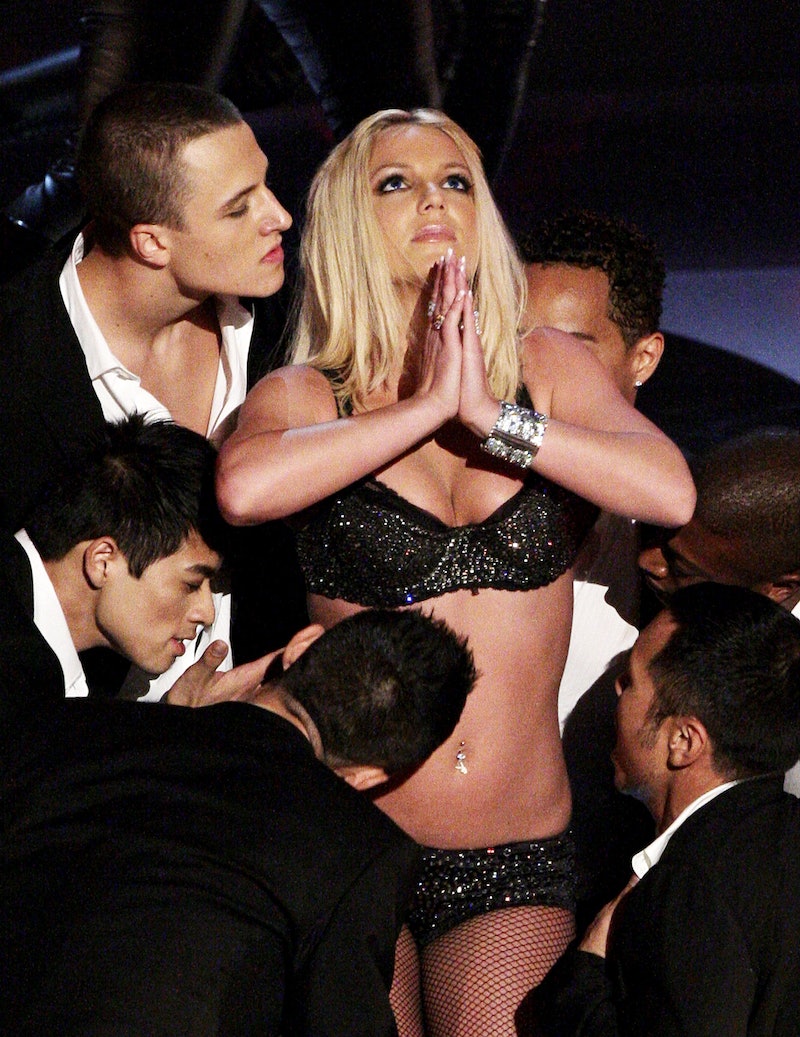 Released during a chaotic year that cemented the singers transformation from America's sweetheart to tabloid curiosity, responses to Britney Spears' Blackout were mostly positive, if steeped in caustic judgment. Impressed reviewers repeatedly commended the playfulness of Blackout, it's striking production and the "bright, brash electropop" of its sound, but did so under the duress of acknowledging the tumult of Spears' personal life. Some critics began their reviews by dragging Spears' various tabloid sins out like criminals in a police line-up, as though attempting to identify the album's focus, or perceived lack thereof. "Two marriages, one annulment, multiple rehab stints, a concussed live-television debacle, a failed custody battle," one Blender review of Blackout said, "and various misadventures in baby-dropping, head-shaving and crotch-exposing."

Based on how Spears was being portrayed in the media, most reviews also took great pleasure in pointing out the irony of the album's title. Rolling Stone's review, for instance, began by calling the title choice, "unfortunate," before sneering, "while judges debate her child-visitation rights, Britney Spears has released an album whose title seems to have been inspired by a major flirtini binge." The low-hanging fruit of Spears' public breakdown was clearly too irresistible for critics who couldn't see past the potential punchline of the album title. But by all accounts, they missed the point.

Taken as a whole, the album isn't one extended retaliatory reference to the tabloid hysteria that followed Spears at the time, despite songs like "Piece Of Me," and "Gimme More," that mention it. Nor is Blackout a tawdry reference to her apparent propensity for partying, regardless of how many of it's songs confidently brag about "dancing tabletop," or hitting the dance floor from "10 pm to 4." Instead, the title choice could be seen as encapsulating the subtle foreboding that creaks out of every song. This was Spears acknowledging that "Miss American dream," had somehow hit a glitch but was embracing her newfound darkness to create something significant. She was working with her anguish instead of against it.

Pitchfork echoed such sentiments in their review of the album which confessed to being "genuinely surprised," by Blackout's "creepiness, its black hole heart," and went on to call its use of autotune, "oddly sinister." Perhaps even more intriguing, is that the music site compared the album's appeal to that of the TV show Twin Peaks. Pointing out that the same clichéd "sour secrets of the suburban every girl," and "virginal beauty off the rails," that made Laura Palmer's story so compelling in the show were the same with which we had an "endless appetite" for watching Spears' very own "messy life."

The comparisons are appropriate, and disturbingly, even extend to the lack of agency experienced by both the fictional character of Palmer and by Spears as a performer. In Twin Peaks, for instance, we discover Palmer's story only through the lovelorn testimonies of the town's bereft men and the police detectives investigating her abuse and murder. On Blackout we're mostly given access to Spears' thoughts and experiences as expressed by the various songwriters who contributed to it. Unlike 2004's In The Zone, in which Spears held songwriting credit for nine out of the 13 tracks, Blackout featured only two songs co-written by the singer. For an album that's so unavoidably personal, Blackout is also strangely disembodied from it's subject.

Lyrically, this is most evident on a song like "Piece Of Me." The power of which relied on the conceit that this was Spears' own rallying cry against a media who were profiting heavily from her story while also denying her a voice in it. Though the song is one of the best on the album, it falls flat when you realize that Spears didn't appear to have much of a say in creating it. As Slate put it, "She's capable of delivering bon mots like, “I'm Mrs. 'Extra! Extra! This just in!'/ I'm Mrs. 'She's too big, now she's too thin'” ... (Ironically, this self-reflective ditty is not one of the songs Britney had a hand in writing.)"

Based upon such misfires, it would be all too easy to dismiss the album as being the product of "an artist who simply couldn't be bothered," as Slate also suggested in their review. But musically, Blackout is far beyond the perimeters of default, mainstream pop and hiding something much smarter. As well as that aforementioned foreboding, the album also warps, stretches, and distorts Spears' vocals to such a point that she occasionally sounds robotic. Auto-tune is used to such a high volume that it at times feels sarcastic — the robotized, derisive response to a culture who wanted to see her perform, mess up, and clean up on demand, like the pop superstar equivalent of a Fembot.

Pop Matters criticized the effect by saying, "she’s reduced to a disembodied voice ... purring disinterestedly into a microphone until someone tells her to stop." MTV speculated that "part of the point," of the effect was to find it hard "to tell where the real Britney begins and ends." You could argue that the effect achieves both, demonstrating the volume with which Spears had become dehumanized and distorted in tabloid media while also taking perverse ownership of that fact. Pushing the effect to ludicrous proportions, Blackout sounds at times like a corrupted sound blaring out of a crashed computer and overriding all attempts to force a hard reboot upon it.

In the middle of a phase in Spears' life and career that producer Pharrell Williams once described as being a problematic "reality show that no one's producing, that no one's directing," Blackout had deeper and darker connotations to it that only some critics were savvy enough to hear. And isn't that sort of the point? The blackout expressed in the album's title had little to do with Spears' alleged partying or in silencing tabloid commentary about her, and more to do with a culture that was so obsessed with watching her that they'd forgotten how to hear her.

With Blackout, Spears was pulling the blinds shut on herself as an object of voyeurism, and was instead begging that we again took notice of her as a musician. And if you listened close enough, the end result was just as disconcerting and desperately compelling as it had all rights to be.

More like this
Britney Spears Shares Unknown Details Of Conservatorship In New Voice Notes
By El Hunt
We’re Still Not Over Britney Spears & Prince William’s “Cyber” Relationship
By Sam Ramsden and Sophie McEvoy
'School Of Rock' Changed Joe Keery's Life Forever
By Alyssa Lapid
'Rap Sh!t' Season 2 Is Officially Happening & Will Include "More Seducing & Scheming"
By Brad Witter and Grace Wehniainen
Get Even More From Bustle — Sign Up For The Newsletter