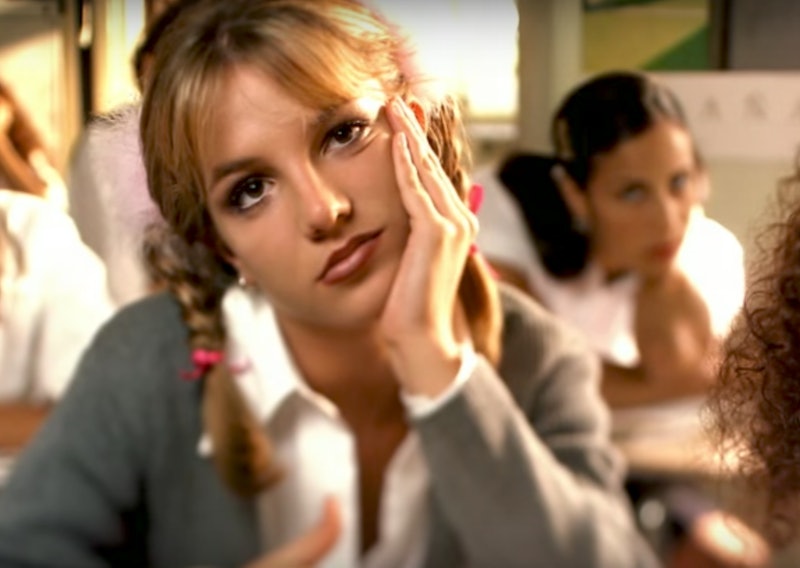 Banana the Burmese python's one-time dance partner has released another at-home runway video, and yes, it requires your immediate attention. Britney Spears' latest Instagram video features an impromptu fashion show that pays tribute to two of her most iconic ensembles. They're subtle, perhaps unintentional homages to outfits she's donned in the past. Set to “Don’t Hurt Yourself” by Beyoncé featuring Jack White, Queen Godney shows off three different getups. While the first lovely look doesn’t get the nostalgia juices flowing (ew, so sorry about that one), the second and third certainly do.

First, let's address the third outfit. The third outfit of the three-part clip calls to mind a little music video for a little song called “…Baby One More Time.” No, she isn’t wearing pigtail braids. And no, she didn’t layer a grey cardigan over her tied up oxford. And sure, it looks as though she might be wearing knee-high boots in lieu of knee-high socks and platform loafers. But you know what? It’s close enough.

Speaking of which, here’s the video for “…Baby One More Time." Pass up a chance to revisit this masterpiece? Never.

The other familiar look in this her fashion show is a deep cut, albeit iconic in its own right. This one is for the Britney stans who’ve spent hours poring over the In the Zone album booklet. It's for the aficionados who purchased the “Me Against the Music” single in October 2003 because waiting a whole month for the record to drop was going to be too much and they needed something to hold them over. And it's for the fans who are familiar with a certain Kanye West remix of a certain Spears song that also features another pop idol.

The second outfit in Friday’s fashion show montage harkens back to the ensemble Spears wore on the cover of the single for “Me Against the Music” featuring Madonna, which is the same the outfit she wore in the album booklet for In the Zone. (And yes, there really is a Yeezy-ified version of “Me Against the Music” on the CD single.) Just like she did way back in 2003, Spears strikes some poses while wearing a brown wide-brimmed hat and a cropped white top. All she’s missing is a pair of gold low-rise pants. You can check out the album booklet art/single art here. (OK fine, it's not exactly like the “Me Against the Music" cover look, but again, it's close enough.)

It's been said a number of times before, but it never hurts to say it again: Spears' Instagram account is genuinely one of the best things the internet has to offer. The video of her painting on the deck of her estate? Instantly legendary. The videos of her family, the videos of the Piece of Me residency, the pictures she’s taken with other celebrities? Simply wonderful. And, of course, there are the tumbling videos, the memes, the dance rehearsals, the corn — all of it is great. The pop legend's fashion show segment is but one of 1,876 (and counting!) reasons to follow her on social media.

Every last one of Spears' Insta posts is a star, and each runway video burns brighter than the last. The fashion show videos are the North Star, and they are waiting to guide you to Instagram content bliss.