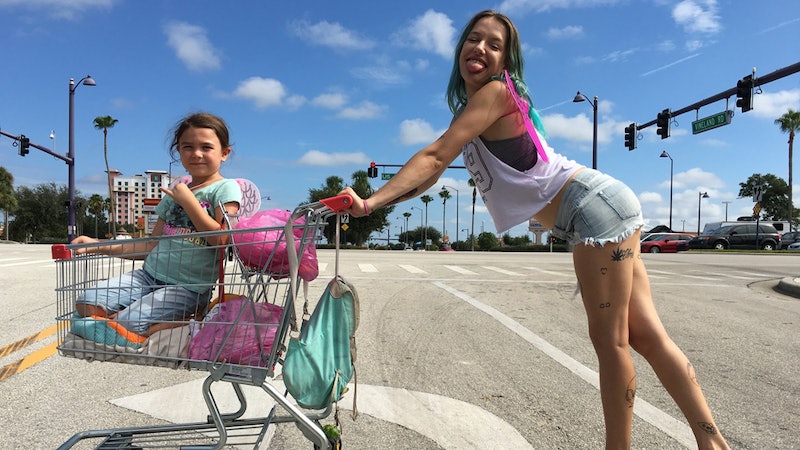 The first time then 6-year-old Florida Project star Brooklynn Prince ever said a bad word was on set of film — a Sean Baker-directed indie that has made a critical killing and is poised to be celebrated throughout awards season. Now seven years old, Prince recalls her time filming the Orlando-based movie with fondness. She remembers coloring and playing with her similarly-aged co-stars on set. She recalls eating dozens of vanilla ice cream cones for a particularly memorable scene. And she retells, through giggles, how The Florida Project taught her how to give the middle finger — and recite a bevy of very bad words.

The film is about a ragtag group of kids exploring the city and getting into trouble over the course of the summer. It specifically focuses on the relationship between Moonee (Prince) and her young, rebellious mother Halley (Bria Vinaite) as they navigate their relationship against the backdrop of poverty. And because Moonee is a precocious and daring little kid, she throws around bad language and flips the bird like nobody's business. However, the same cannot be said for Prince in real life.

"I held up the wrong finger, so mom would have to show me how to do the right finger," she says. "But then Sean [Baker] had to explain to me what it meant... So I knew at certain times when I should do it or when I shouldn't do it."

In a scene in which Moonee and her mom Halley are eating outside on a bench, a helicopter flies overhead, and Halley throws her middle finger up to the sky. Moonee follows her mother's lead and does the same, but Prince didn't know which finger to reveal to the circling chopper.

So, according to Prince, when she got home from shooting that night, her grandmother gave her a helping hand — quite literally. "That night she's like, 'You have to hold up this finger.' But she had to point to it because she didn't want to do it," Prince says. "I was like, 'Ohhhhh. Now I get it.'"

But learning how to correctly flip someone off wasn't the only first Prince experienced on set. Like seasoned actors well beyond her age, Prince learned how to cry when the scene demanded it. The end of the film brings about tears for both mother and daughter, but Prince wasn't sure if she'd be able to pull off such strong emotions for the film's final moments.

"I didn't know I was gonna cry, but I kept preparing for it," she says. "There was a good chance that I wasn't going to cry because I don't cry very easily. But I just did it automatically and then after the scene, I was like, 'Whoa.'"

But Prince, who admits she's seen the film about 10 times already, says she can't watch the end of the film because it will make her tear up for real. "I gets me so emotional that I can't watch the ending. In these Q&A [screenings] when I'm wearing mascara I have to close my eyes so I don't cry."

But luckily she's in good company. "My dad was a pile of tears," she says of her father after he saw the film for the first time.

And yet Baker, the film's director, hasn't shed a tear according to pint-sized Prince. "Sean's a tough man. He doesn't cry. He didn't cry at all."

But thanks to her crash course in acting on set of The Florida Project, Prince now knows how to shed enough tears for all of us.