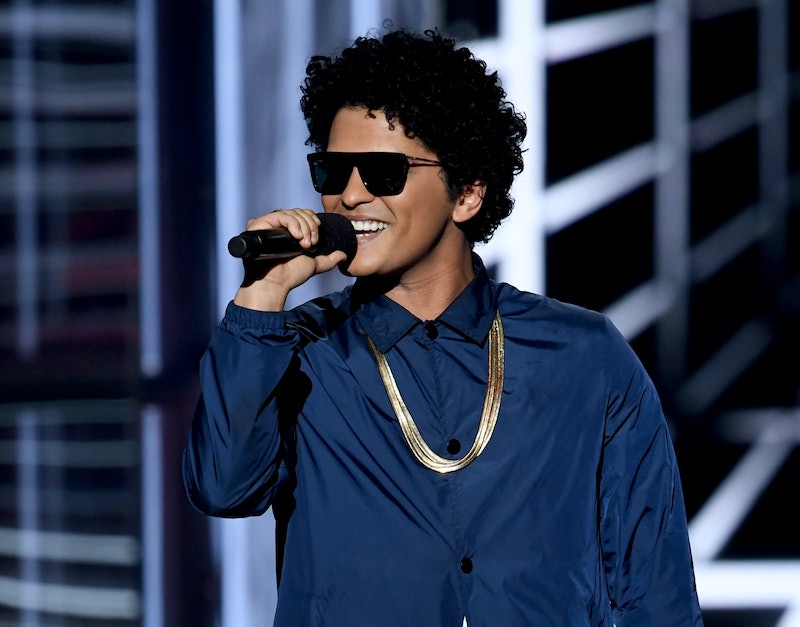 The dream that you wished has come true. Soon after Deadline reported on Thursday, Feb. 6 that Bruno Mars will star in a new Disney movie, the 11-time Grammy winner seemingly confirmed the news by posting an Instagram video of himself playing "When You Wish Upon a Star" from Pinocchio on the piano. "If your heart is in your dream ‬No request is too extreme ‬‪When you wish upon a Star”🎶 #MarsMeetsTheMouse #ImGoingToDisneyland #YESSS!!😜" he captioned the post.‬

Following what Deadline described as months of discussions, Mars and Disney had reportedly reached a deal for the singer to both star in and produce a "music-themed theatrical narrative feature." Although the publication noted that the plot is currently being kept under wraps, their insider revealed that the film will consist of "mostly original music" that Mars will create and perform. (TheWrap also later confirmed the same details via "an individual with knowledge of the project.") Bustle has reached out to Mars' rep for comment.

The news of Mars' project comes on the heels of Lin-Manuel Miranda's Feb. 3 announcement that Disney is also bringing his Pulitzer and Tony-winning Broadway musical Hamilton to movie theaters on Oct. 15, 2021. What's more: the original cast, which included Miranda, Leslie Odom, Jr., and Daveed Diggs, will be featured in the big screen presentation of a performance filmed in 2016 at New York City's Richard Rodgers Theatre.

"We're excited to partner with Disney to bring the original Broadway company of Hamilton to the largest audience possible," Miranda said in a press release obtained by Bustle. Deadline reported at the time that Disney paid $75 million for worldwide rights to the show.

As for Mars, although music is his obvious forte, he's no stranger to acting either. After playing a "little Elvis" in 1992's Honeymoon in Vegas, which starred James Caan, Nicolas Cage, and Sarah Jessica Parker, Mars also lent his voice to macaw Roberto for the 2014 animated musical comedy, Rio 2. Plus, he also pulled double duty as both the host and musical guest for a 2012 Saturday Night Live episode. When he returned to the NBC sketch comedy show in 2016 to debut "24K Magic," Mars even dropped into a fast food drive-thru bit.

Mars certainly has exhibited his diverse skill set, and Disney's forthcoming music-themed movie may just be the perfect marriage of two of his major strengths.

More like this
There's A Taylor Swift Easter Egg In Ryan Reynolds' 'Deadpool 3' Teaser
By Marina Watts
Lizzo Twerks While Playing James Madison's 200-Year-Old Crystal Flute Onstage
By Radhika Menon
Everything To Know About Taylor Swift’s 10th Studio Album, 'Midnights'
By Grace Wehniainen and Jake Viswanath
Twitter Is Freaking Out Over Rihanna’s 2023 Super Bowl Halftime Show Announcement
By Stephanie Topacio Long
Get Even More From Bustle — Sign Up For The Newsletter