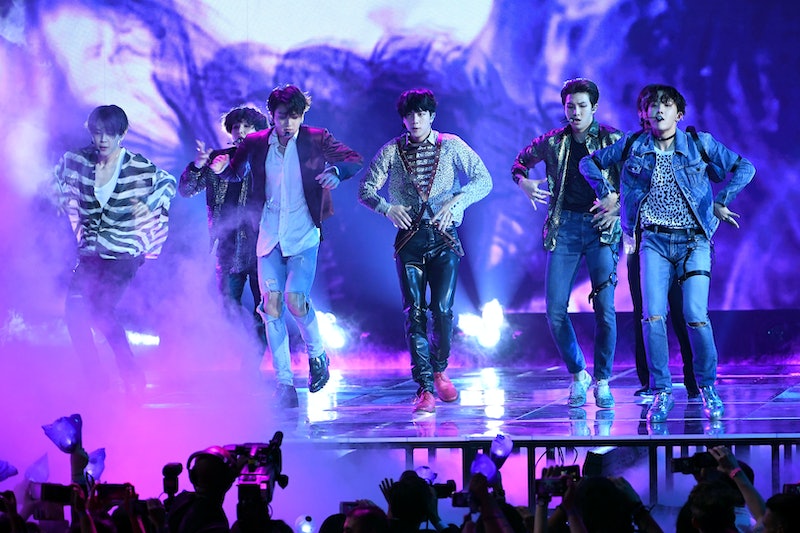 BTS has broken many historic barriers in their career, but the Billboard Music Awards are familiar territory for them. After giving an electrifying performance of their hit "Fake Love" at last year's ceremony — and taking home a win — the BTS Army has been wondering what the group has up their sleeve this time around. Luckily for them, BTS and Halsey's 2019 Billboard Music Awards performance was everything fans could have hoped for.

While BTS previously performed their new hit single "Boy With Luv" during their landmark Saturday Night Live appearance, the BBMAs marked the song's worldwide live premiere, and their first time performing the song with Halsey herself — and they didn't waste any time turning on the charm.

The boys started busting movies right off the bat against a movie theater backdrop — the perfect setting for a date. Halsey then strutted onstage and joined in on their hard-hitting dance routine without missing a beat. Through all the epic choreography, the cityscape and neon "Love" sign made the performance feel romantic, and everyone in the crowd and at home was lapping it up.

The friendship between Halsey and BTS has grown tremendously since they first linked up for "Boy With Luv." Prior to their first performance together, she even gave every member of the band a special friendship bracelet while they were rehearsing for the show in Las Vegas.

Halsey first shared a video of the pink bracelet on her Instagram stories, writing that she "finally got to give these to everyone." While she didn’t confirm that "everyone" meant the boys of BTS, it soon became clear that was the case when an unknown member of BTS shared a video of him wearing the bracelet himself on the band’s Twitter account, thanking the singer for the gesture.

Before their big moment, BTS and Halsey gave a sneak peek at their BBMAs performance during an interview with Radio.com, and according to band leader RM, Halsey had never done major choreography prior to their number. "Halsey always told us it's a new challenge for her too" RM said. "She's never done an official choreograph for her career." Her solo performance of "Without Me" earlier in the night begs to differ, but in both cases, she pulled every move off with ease.

And if the performance wasn't exciting enough, the boys were already winners before they even stepped foot on stage. BTS took home the Top Social Artist award for the second year in a row, proving that their fans have truly immense power. They also won Top Duo/Group for the first time ever, making it another historic victory for K-Pop.

This year, BTS has truly made major history in the U.S. The group was the first K-pop act to be a musical guest on SNL, and the first to sell out stadiums across the U.S. and London on their upcoming tour. If their BBMAs performance was any indication of what to expect from the tour, fans are in for a thrilling treat.

More like this
Everything To Know About Taylor Swift’s 10th Studio Album, 'Midnights'
By Grace Wehniainen and Jake Viswanath
Kanye West Apologizes To Kim K "For Any Stress I Have Caused" In Rare Interview
By Jake Viswanath
Jason Derulo Is Launching A New Singing Show In The UK
By Maxine Harrison
'School Of Rock' Changed Joe Keery's Life Forever
By Alyssa Lapid
Get Even More From Bustle — Sign Up For The Newsletter