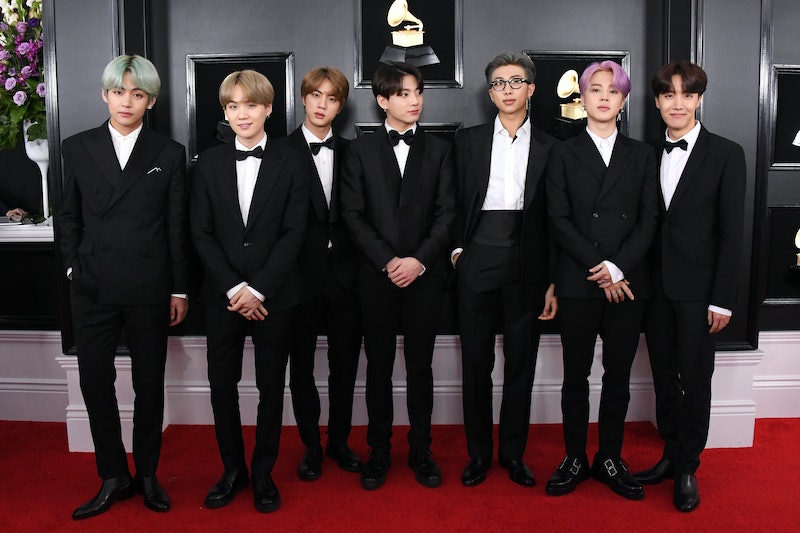 On Wednesday, May 1, the hugely-popular Korean band BTS won Top Social Artist at the 2019 Billboard Awards and the moment has fans in a major frenzy for many reasons. The guys, who received the news while on the red carpet speaking with Sway Calloway, have taken home the award three years in a row and avid followers of the group couldn't be more excited about the group's amazing three-peat.

It goes without saying that the K-Pop group has a huge following all around the world and their popularity has only seemed to increase over the past few years. Their large global social influence has been a well-known factor throughout their career. BTS, in fact, holds the Guinness World Record for most Twitter engagements and were the most-tweeted celebrities in 2017 and 2018.

Their win should definitely come as no surprise. The band has maintained the top spot on Billboard's Social 50 list for 124 weeks in a row. In December 2017, BTS was named a Billboard Top 10 artist in the charts' year-end list. They also made K-Pop history as the first band in the genre to earn a spot on the Billboard Hot 100 list.

With this recent Top Social feat, the band has now won three Billboard Music Awards, and one American Music Award, becoming the first Korean group to do so at both ceremonies. As the accolades continue to roll in, the group's "Army" fanbase continues to revel in their success and popularity on social media — and this year's 2019 Billboard Awards will certainly be no different.

Some proud fans referred to the band members as "legends" after they took home the Social Award for the third year in a row.

Another fan is not shocked that the band has pulled off the three-peat.

The Army Does It Again!

Another Twitter commenter applauds BTS for "paving the way."

These fan are excited and can't wait to see BTS take home the award year after year.

Someone pointed out how BTS has checked off yet another year winning the Top Social Artist at BBMAs.

An avid member of the Army shed tears of joy after learning of BTS' recent win.

Although this has become a huge moment foe the group, it is by no means their first time taking on a major awards show. In 2018, BTS made their Grammys debut when their album Love Yourself: Tear nominated in the Best Recording Package category. And though they did not win the trophy that night, the moment became a major milestone for the group, marking their first time presenting at a large awards ceremony. The band also made their American live-performance debut that year at the American Music Awards. If their third consecutive Billboard Top Social award is any indication, it's safe to say that we'll be seeing BTS on the red carpet at every major music awards show for many years to come.

More like this
Stormzy Made A Passionate Speech About The Importance Of Diversity
By El Hunt
Everything To Know About Taylor Swift’s 10th Studio Album, 'Midnights'
By Grace Wehniainen and Jake Viswanath
Wallows Want Their Own Epic “Lizzo Flute Moment”
By Jake Viswanath
Lizzo Twerks While Playing James Madison's 200-Year-Old Crystal Flute Onstage
By Radhika Menon
Get Even More From Bustle — Sign Up For The Newsletter