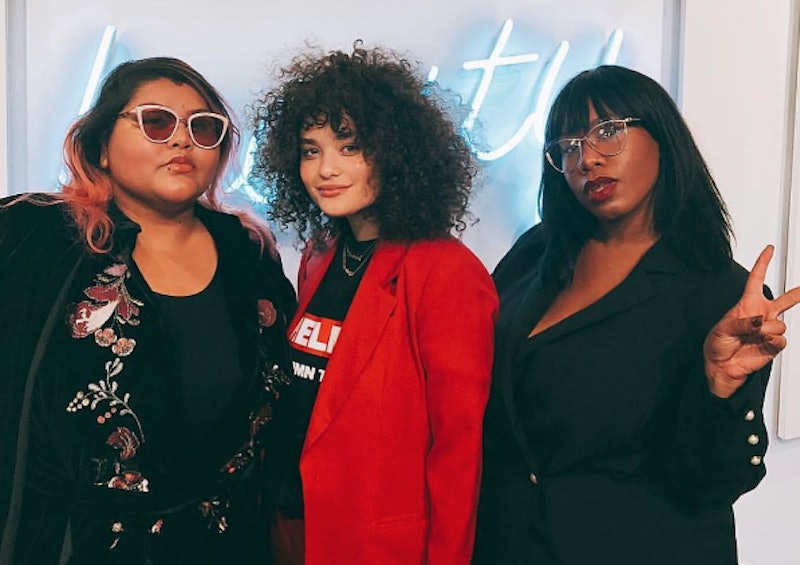 Beauty influencers Diana Veras, Ushshi Rahman and Kelly Augustine got together as a part of the Bustle's Beauty IRL series in collab with Coty Inc. at STORY, which discussed how real people are experiencing beauty and how the beauty industry is changing to be more authentic. Just like the name suggest, these are real woman talking about their experiences in the real world.

One scroll through Veras' Instagram page, and you'll see almost every hairstyle possible. She wears slicked back buns, her hair free and natural, and even covered up in wigs. You'd never guess that her pulling back her hair in public was a major moment for her.

That's why these panels matter.

While the Bustle IRL event covered everything from self confidence to the future of the beauty industry, it was no surprise that talk started with Instagram — something 400 million people use every day, according to Media Kix.

The women discussed their personal social media use, from whether they edit their photos to why they post what they do. The social media site is a way to connect with the world and express ourselves. But the bigger message came when talking about how Instagram has the possibility to change the entire beauty world.

"I think it was more powerful for me to realize that people on it have the power to actually change the companies and what they feature," Rahman says in the panel. "What we put out and what we ask for is what companies respond to."

Take for example, L'Oreal UK firing their first transgender model, DJ and trans activist Munroe Bergdorf, after her Facebook rant deemed by some as "racist". The makeup brands's action caused a ton of backlash on social media for what Rahman refers to as "a completely fair deconstruction of white supremacy." Bergdorf was soon after picked up by Illamasqua, a British makeup company that champions self-expression — something Rahman supports.

When asked what the one thing that the beauty industry should be doing, the response was unanimous — look at real people. Something that brands like Glossier and Milk Makeup has already started doing. Of course, there are still tons of different beauty companies that are sticking with celebrity-centered ads as well.

"Seeing Lupita and Issa Rae... Issa Rae is like, my icon! And she's not what you would consider, like, the standard of beauty. And no one ever speaks about her in a way where they're like 'Wow, this girl is beautiful.' So to see her as a representative for a beauty brand, I'm like, 'OK! You guys are seeing what I'm seeing!' Every week I watch Insecure and I'm like, dang she's so pretty! And no one talks about it! So to see her as a Covergirl I was like OK we are actually getting somewhere," Augustine says.

Along with that, less photoshop was also on the list, which the fashion world has already started to take notice of. A new French Photoshop law requires any photo that has been altered in any way will have to be labelled "photographie retouchée," or "retouched photograph," according to NPR.

Getty Images will also no longer accept images where bodies have been photoshopped. On top of that, LVMH and Kering have joined together to curb the abuse of models as well.

Of course, it couldn't be a diversity panel without touching on the recent Fenty Beauty launch. Or, as I like to call it, the makeup launch heard 'round the world. The brand launched with a whopping 40 different shades of color-inclusive foundation. It's wasn't just that the brand did it though, it was how they did it, according to the panel.

"It was so natural in the way [Rihanna] just included everyone," Augustine says. "She doesn't take it to seriously."

Augustine says that while some brands like to push their inclusive products to the forefront, Fenty Beauty made it natural. They just launched great products, instead of branding themselves as an inclusive brand. As the women on the panel put it, they set the bar for the beauty world.

Panels like this are important to not only the future of the beauty world, but to bring makeup fans closer together. We are all on a different road to self-love and acceptance. To hear other women talk about their journeys and encourage others to focus on theirs will make the beauty world a better place.

What we see is not always what we get. What we comment doesn't always get viewed. What we wish for isn't always a reality. But eventually it will be. If we are silent about the things that matter to us the most, we'll never know what the beauty industry could be.

UPDATE: This post has been updated. The previous version included a misrepresentation of Rahman's views.