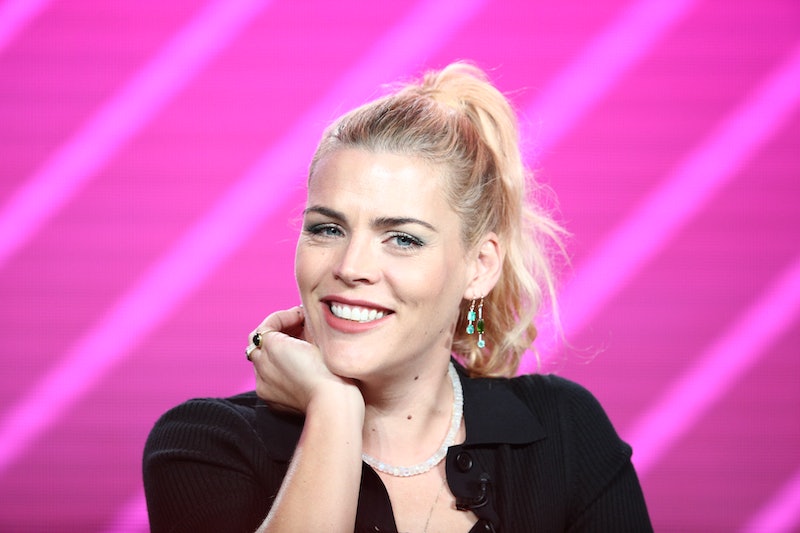 After a seven-month run on E!, Busy Philipps’ late night show has been canceled by the cable network. But fret not, late night enthusiasts, because something tells us this may not be the last we hear of Busy Tonight. In a series of late-night Instagram Stories posted on May 5, Philipps revealed E! has not picked up Busy Tonight for a second season; the final episode is slated to air on May 16. In her somber Instagram posts, the Freaks and Geeks alum tells her followers that she's hoping for the series to be picked up elsewhere.

"Here’s the thing, you guys. My show Busy Tonight is not going to continue on E! after May 16. They decided not to pick it up. Look, we’re meeting with people and seeing if there’s another place that makes sense for it to go, because I would like to continue doing it. We would all like to figure out a way to continue to make it. It’s wild because we’ve only been doing the show for a relatively short period of time. In that time, I feel we’ve been able to accomplish so much creatively and you know, I guess culturally and I think we’ve had a real point of view."

She continued, "I'm so proud of all of the things we've been able to do and I feel the show is really successful in that way, but I don't know what to say."

An E! spokesperson told Bustle of the cancellation: "Busy Tonight last episode for E! will air Thursday, May 16, with a special celebratory half-hour. Busy is a hilarious and charismatic talent and we are grateful to the entire Busy Tonight team who has delivered countless laughs and heartwarming moments in what will be over 100 episodes."

Busy Tonight, which premiered on E! in October 2018, follows host Philipps as she examines current events through a comedic lens and interviews celebrity guests. The late night series has featured guests such as Mindy Kaling, Lizzo, Tracee Ellis Ross, and the reigning queen of talk shows herself, Oprah Winfrey.

In her Instagram stories, Philipps also touched on the disparity of women in late night TV. "I hope that, you know, we can continue to do the show somewhere else. I hope that we figure that out, because it does seem lame that there would be just like one woman in late night at a time. But I don't know," she said. "It's crazy. I have truly the most amazing people that work with me. Our staff is [a] nine person female [staff], it’s an office full of dope women who get it done. But you, know, obvs, I’ll let you know what’s happening. Goodnight, you guys, I love you."

As Vanity Fair notes, the cancellation now makes Full Frontal with Samantha Bee the only female-led late night talk show on air. However, come September, YouTube star Lilly Singh is slated to join the sparse roster of female-fronted late night TV as she replaces Carson Daly's NBC slot, which will be re-titled A Little Late with Lilly Singh. The historical decision makes Singh the first female (and first Asian!) to host a late night show on a major network.

Following news of Busy Tonight’s cancellation, Philipps took to social media to share some bittersweet news amid the announcement: a Critics' Choice nomination. The Dawson’s Creek alum garnered a Critics' Choice Real TV Award for Show Host for the talk show, which was announced on May 6. She wrote on social media, "Well this is a f*cking WILD turn of events this morning; I was just nominated for a @CriticsChoice Real TV Award for Show Host. THANK YOU."

With a Critics' Choice nomination in tow — as well as the possibility of the series being picked up elsewhere — this might not be the last you hear of Busy Tonight.

Editor's note: This article has been updated with a statement from an E! spokesperson.