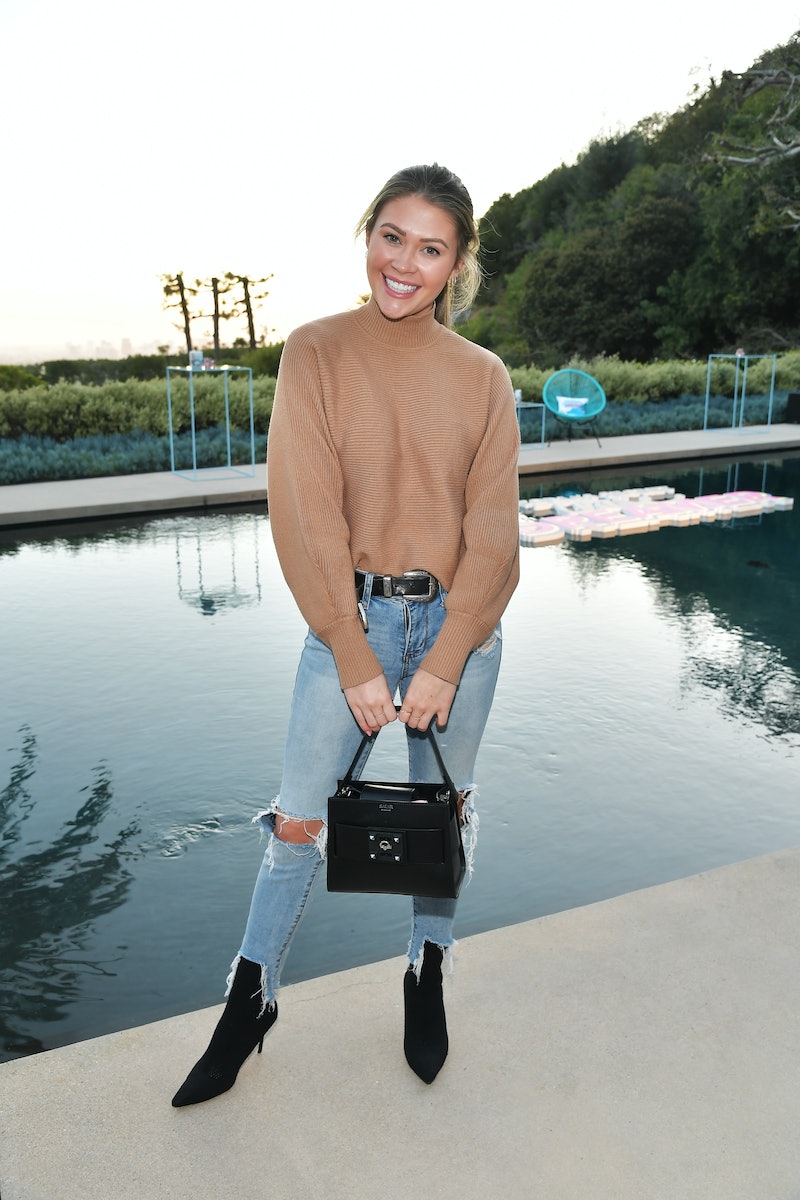 It's not easy to stay friends with someone you once dated, but after The Bachelor, Colton Underwood doesn't seem to be having any problems with that. On Sunday, Caelynn Miller-Keyes shared a third wheel photo with Colton and his final rose winner, Cassie Randolph. Not only was it hilarious and adorable all at the same time, but it's also proof that despite the rollercoaster of a journey this reality show takes its contestants on, it's still totally possible for a contestant and a lead to remain friends — new girlfriend included.

In the photo, Cassie and Colton are kissing, while Caelynn stands next to them alone with her arms in the air. "She got the final rose, I got the third wheel," Caelynn wrote in her caption.

Caelynn did make it pretty far on The Bachelor — she was eliminated right after hometown dates, so she and Colton did get to know each other pretty well, and he met her family. But more important than that is the friendship that Caelynn and Cassie created while on the show. They were close while they lived in the Bach mansion together, and that bond has lasted beyond the end of filming, so it's natural that she and Colton would cross paths.

If there was ever any weirdness between Colton and Caelynn after The Bachelor, it seems like it's all gone now. After all, if they can joke like this with each other, it's probably safe to assume that there's nothing awkward going on that would keep them from hanging out.

Besides, Caelynn and Cassie were close through the entire Bach journey, and after being thrown into such an unusual experience, of course they bonded. It's sweet to see that their bond is lasting now that all three of them are back in the real world — and that they can still have fun together, despite what may have happened (and was broadcasted on national television) in the past.

It seems like Caelynn has been spending a lot of time with Cassie and Colton since The Bachelor. Not long after the finale aired, Cassie and her sister (and roommate), Michelle Randolph, moved into the same apartment building as Caelynn to be closer to Colton. And recently, Colton and Cassie said they're rooting for Caelynn if she ends up on Bachelor in Paradise, because they really want her and a new potential BF to join them on their dates.

“We are rooting for Caelynn to come back with a man so we can go on some triple dates with Gregg and Michelle," Colton said in an interview with Us Weekly at the time.

Obviously, most of the contestants' goal on The Bachelor is to leave the show in a relationship or engaged to the love of their life, but the odds of that happening are so slim. Instead, Caelynn left with a new BFF and a friend in the man she dated on national television. And somehow, it seems like that outcome is just as wonderful.