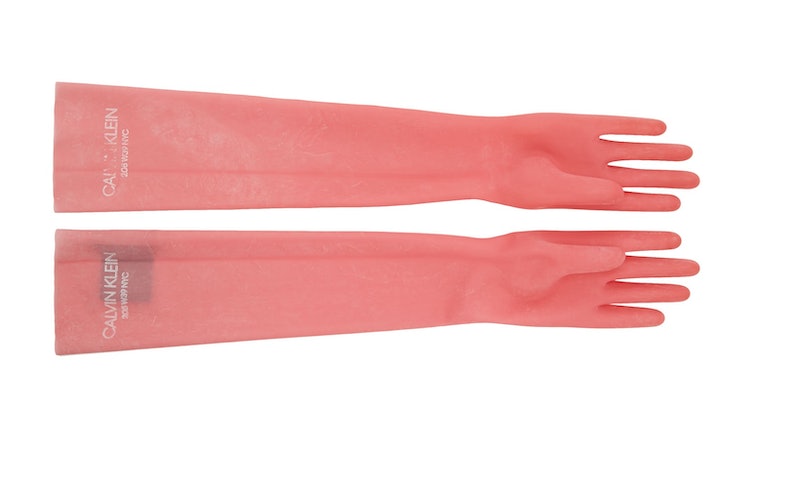 You'll never look at your cleaning supplies the same way after you see Calvin Klein's rubber kitchen gloves, which are selling for a whopping $390. While it might sound weirdly extravagant, these cotton candy pink gloves aren't meant to be worn to wash your dishes. Instead, they're an avant garde accessory that's meant to bring an out-of-the-box touch to any outfit you throw at it. If you still feel skeptical, bare with me.

The gloves were the brain child of Raf Simons, a Belgian designer with an impressive resume that includes previously being the creative director at Christian Dior, and currently being the chief creative officer at Calvin Klein. In his second runway show for the label, Simons filled the Spring/Summer 2018 catwalk full of satin Western shirts, Andy Warhol inspired denim jackets with prints of Dennis Hopper circa Easy Rider, Wild West boots, red drawstring sweaters, and cowboy-like fringe accents that began looking more like party tinsel in all its excess. But among this American-experiment-on-acid collection was also a mid-century like vibe, and it marched down in the form of 1950s-couture looking saffron dresses offset with pink rubber gloves that rose well up to the shoulders and underneath the short sleeves.

And blush pink wasn't the only color offered, either. There were blood red gloves and neon blue versions, too.

In Simons' eyes, there isn't enough risk in fashion anymore. "Fashion has embraced too much the spectators’ expectations," he shared with Vogue. This second collection, then, was all about experimenting, pushing boundaries, and creating pieces that might not necessarily sell out stores, but appeal to those who are craving something a little different than what trends are cranking out that season.

And to be sure, rubber, PVC, and latex have always been an integral part of fashion, where they either tipped their hat to a subversive culture, brought out a sexy mood, celebrated the LGBTQ+ community, or was used as a texture to contrast against more conventional pieces. Which is exactly what these kitchen rubber gloves are doing. Juxtaposed against a flirty pencil skirt dress, they look out of place but seriously cool. It might not be a look that everyone embraces, but you have to appreciate the creativity behind it.

The gloves themselves are made out of a 100 percent synthetic rubber, so they're literally just like the gloves underneath your grandmother's sink. They ones currently for sale come in a 'rose' pink shade, and have a Calvin Klein logo and text printed at the cuffs. Something about it feels so futuristic and dystopian, even if it is just a pair of couture cleaning supplies.

This isn't the first time that the fashion world found inspiration among the seemingly uninteresting, everyday items lying around your house. For example, Moschino made a dry cleaning bag dress that cost $700 and literally looked like you tore a neck hole into a plastic bag and called it a day. Meant to be layered over a simple shift like sheer pieces usually are, it rose a lot of eyebrows when it made its way down the runway in 2017.

Then the designer Gelareh Mizrahi made a "Thank You Bodega Bag" that was meant to look like a common grocery store plastic bag, but was made with nude and red python. While a plastic bag is free at the drugstore, this particular one will set you back $1,500.

Taking something commonplace and matching it with luxe materials or combining it in unexpected, fashion-forward ways is a test in creativity. And while it might not be everyone's particular cup of tea, it's fun to see come alive.