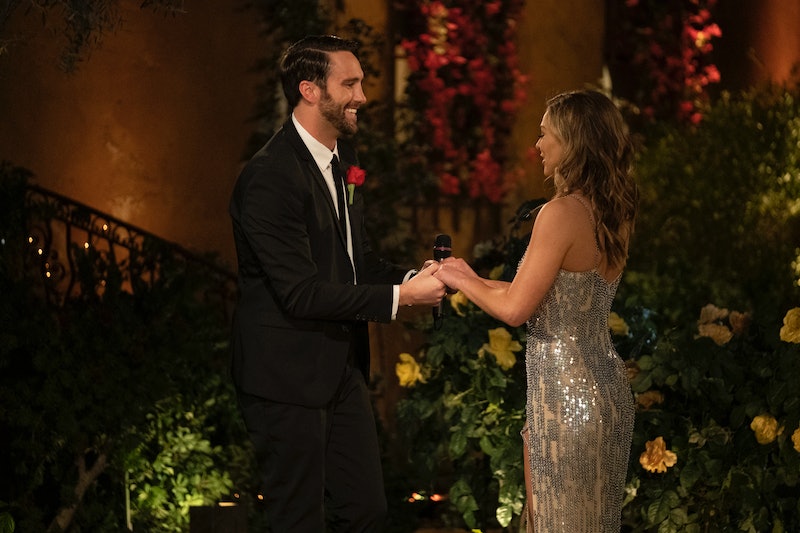 Cam made a lasting impression on Hannah B. when they first met during Colton Underwood's After the Final Rose special. In fact, she enjoyed his rapping skills so much it earned him an early rose long before The Bachelorette season started. Unsurprisingly, this inspired him to bust out another rap upon stepping out of the limo during the premiere last week. However, despite his seemingly goofy demeanor, Cam's Instagram proves that — despite his freestyle raps and semi-annoying catchphrase, ABC (Always Be Cam) — this particular suitor actually deserves to be taken a lot more seriously that his edit has thus far implied.

Granted, he doesn't seem to be doing himself any favors when it comes to creating enemies among his fellow contestants. In an exclusive sneak peek of Week 2 provided by Entertainment Weekly, Cam is shown crashing a private conversation Hannah was having with another suitor and attempting to turn it into an awkward two-on-one date. Sure, it was meant to be taken as a romantic gesture and a way to stand out among the other men in the mansion, but Cam's forward behavior could end up putting a big target on his back. That would be a shame if it turns out to be the case, because based on his social media, Cam is actually a decent dude, regardless of how he's coming across onscreen.

Prior to becoming a contestant on The Bachelorette, Cam's Instagram is filled with photos of him and his family, all of whom he seems extremely close to and loves very much. He and his mom even go on mother-son dates together, and considering how much he seems to love and respect the women in his life, that bodes well for his future with Hannah.

In addition to the close bond he has with his family, Cam also has the love of an adorable furry friend. Yes, Cam has a dog and the cuteness level between these two is off the charts.

He's also a big fan of posting throwback photos from his childhood, giving followers a glimpse into his past long before he was ever vying for roses on national television.

However, the most important and courageous post from Cam's Instagram is one in which he opened up on this own health issues and the struggles he was forced to face at a very young age when he was diagnosed with lymphedema. In the post, Cam explains that lymphedema is an incurable condition and that several doctors and specialists told him he would never be able to play competitive sports. This was back in 2002 when Cam was just 12 years old. He was able to manage the condition for a while, however, an infection in his knee a few years later almost led to his leg getting amputated.

"The thought of losing my leg gave me crippling fear and anxiety. How would I ever be able to dance with my future wife, play sports with my future kids, and maintain a healthy lifestyle?" Cam wrote in the Instagram caption. "As fate would have it, the experts at Boston Children's Hospital performed a diagnostic procedure that saved my leg from being amputated in Dec. 2016."

You can read the heartfelt post in its entirety on his Instagram account, but it's a message of strength, courage, and determination that may make you see Cam in a completely different light. It's easy to make snap judgements about people on TV, especially on a reality dating show like The Bachelorette, but Cam's social media proves that there's so much more to a person than a quick sound bite. Let's hope he's given the chance to show that side of himself in the coming weeks.