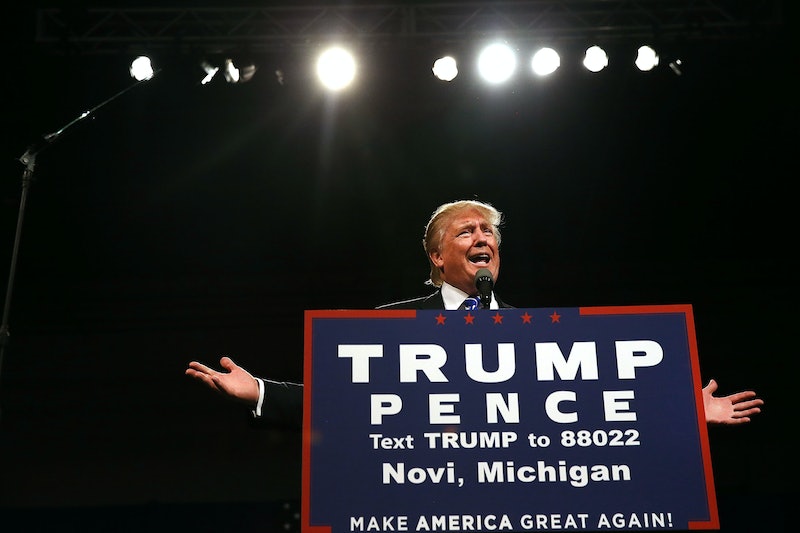 Surprise, surprise — turns out that the whole "build a wall, Mexico will pay" thing may not have been quite so clear-cut as President-elect Donald Trump made it seem on the campaign trail. Now that the candidate is about to become the president, it's looking like financing Trump's border wall could cause huge issues in Congress — namely because the American taxpayer is going to have to foot the bill, at least from the outset.

Legislatively speaking, it wouldn't necessarily have to be so difficult on the surface. A 2006 law paved the way for the construction of a "physical barrier" along the border with Mexico, and although the Bush administration did take some steps to strengthen border controls, they never actually completed the barrier. This, according to House Republicans and the Trump transition team, means that now they don't need additional authorization to build the wall. What they do need, of course, is money. A lot of money. Most estimates say construction of the wall would reach into the billions of dollars, and that's not even taking into account the costs of maintaining it, staffing crossings, and the like. And as the legislation to build it is already in place, House Republicans say they plan to include construction costs for the wall in the next spending bill.

This is where things get tricky for the Democrats in the Senate. It would be one thing to block new legislation, but blocking the new spending bill is more difficult, and could lead to another government shutdown if the bill isn't passed in time. Republicans also bet that Democrats could be reluctant to block what they see as such a popular campaign proposal. They could also run into trouble when people begin pointing out that several high-ranking Democrats, including Barack Obama and Charles Schumer, voted for the 2006 bill that Republicans are citing now.

Either way, it's clear that Mexico will definitely not pay for the wall up front, so if the wall is going to go up as quickly as promised, the money is going to have to come from somewhere else. Trump and numerous Republicans have cited ways that they might coerce the Mexican government into reimbursing the cost of the wall, including things like trade negotiations and threats of higher visa fees. Mexican officials, on the other hand, have stood firm in their absolute refusal to pay for the cost of the wall.

Maybe Trump has a surprise negotiation tactic up his sleeve, one that will force Mexico to turn on its heels and dump billions of dollars into American coffers. But for now, the money will be coming directly out of American paychecks without any guarantee that even a dollar of it will be repaid. One thing you can be sure of: Senate Democrats are not going to let this plan go through without a fight.