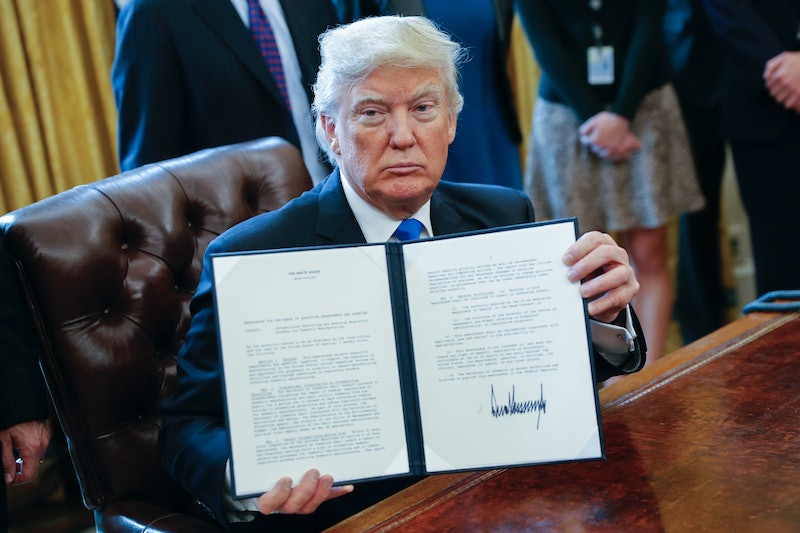 You can say one thing for the new POTUS: he's been busy. Just two full days into his four-year term, President Donald Trump has signed ten executive orders. Some of them — like withdrawing from the TransPacific Partnership free trade agreement negotiated by President Obama — were met with bipartisan support (though there were certainly detractors as well). But most of these executive orders — from fast-tracking the Keystone and Dakota Access pipelines to rolling back Obamacare — have many Americans deeply concerned about the reach of executive power. Unfortunately, while Congress can pass laws to override executive orders, those laws are subject to presidential veto. And even if the Republican-controlled House and Senate somehow decided to defy their party's own president, it's just not all that difficult to imagine Trump exercising his veto power.

Executive orders are undoubtedly one of the reasons Democrats and Republicans fight so hard for power of the Oval Office. Pushing legislation through a divided House and Senate is often a long, exhausting, sometimes futile endeavor. But with one simple signature, a president can effect enormous changes benefiting their political side.

What has many liberals especially anxious about Trump is the focus of his executive orders. Issues like the Dakota Access pipeline have been lightning rods of controversy, and are seen as indicative of an administration that regards the rights of Native Americans as dispensable. It can be extremely hard to accept such an aggressive flippancy from the president's office. That's just one of 10 executive orders, and by no means the only controversial example.

Based on history, and the non-politicization strived for by the Supreme Court, the best hope of those who oppose Trump's executive orders probably lies in legal annulment from the judicial branch. The sitting justices have been willing to look at the constitutional basis for executive action, rather than the politician in office, with "liberal" judges sometimes ruling in favor of "conservative" presidents, and vice versa. Here's hoping they bring that same nonpartisan perspective to Trump's executive orders.