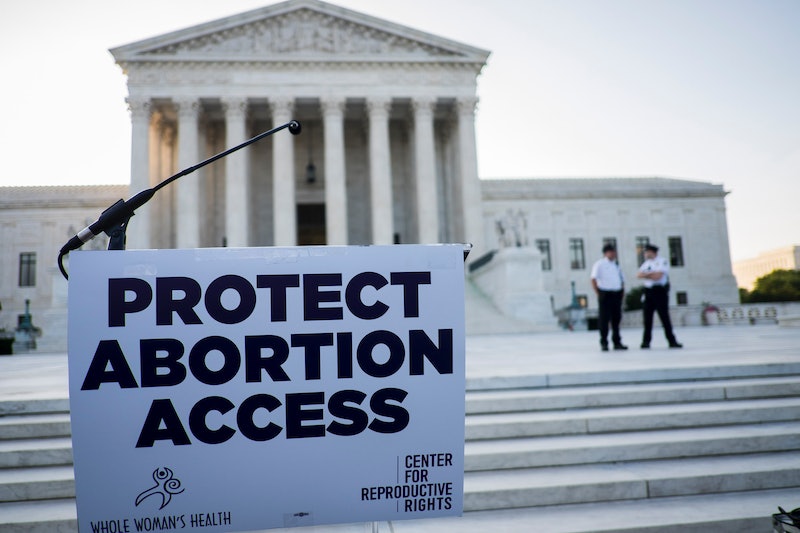 On Tuesday, the House of Representatives passed an anti-abortion funding bill that could be detrimental to American women who can't afford to pay for an abortion out-of-pocket. HR 7 would make the Hyde Amendment, which already prohibits federal funds from going toward abortion, permanent, and could effectively prevent even private insurance plans from covering abortions. The bill has to clear some hurdles before it's signed into law — but not many hurdles. Still, there's one simple way HR 7 can be stopped.

The Senate will be next to vote on HR 7, and if lawmakers vote it down, the bill will not be signed into law at this time. Fortunately, there's a sliver of hope that HR 7 may die in the days to come, because 2017 isn't the first time it's successfully passed through the House of Representatives. Two times before, the bill won the House vote, but ultimately failed to pass the Senate.

In 2013, New Jersey Rep. Christopher Smith sponsored the No Taxpayer Funding for Abortion and Abortion Insurance Full Disclosure Act — otherwise known as HR 7 — and it passed the House early the following year, only to be shot down by the Senate. Smith sponsored it in 2015, and the same scenario occurred yet again. For the current assault on abortion rights, it doesn't look like the third time will necessarily be the charm.

HR 7 passed the House with a 238–183 vote. Aside from three Democrats who astonishingly voted to pass the bill, the decision followed party lines. If the same is true in the Senate, the bill could fail. In the 115th Congress, there are 52 Republican senators and 46 Democratic ones. But in order for the bill to pass, at least 60 senators must vote "aye" on it. That means at least eight Democratic senators would have to cross party lines in a big way. It's not completely clear when the Senate vote will be held, but you should expect it in the near future.

There's another way the bill could be stopped — but it's a long shot, to say the least. If the bill were to pass through the Senate, President Trump could theoretically veto it and send it back to Congress. However, this is extremely unlikely considering Trump wasted no time reinstating the global gag rule, which prohibits the United States from issuing foreign aid to organizations that offer abortion, let alone even mention it as a family planning option.

So, in the time between now and the Senate vote, send letters and emails to your senators, call their offices, and spread the word, because right now, advocacy could make all the difference.