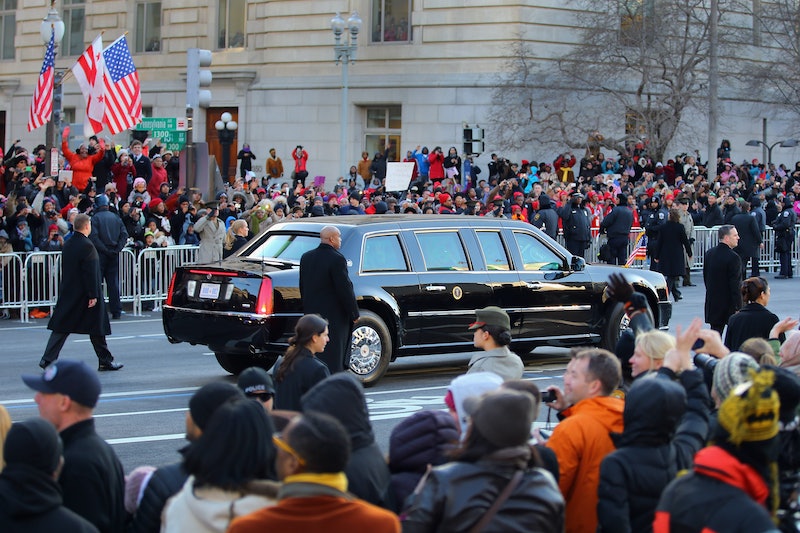 If, for some reason, you're interested in attending the inaugural parade, you're probably wondering about a few important questions. Like, can I even attend the inaugural parade? Where is it, and how do I get there? And maybe most importantly: do I seriously want to go?

That said, the parade on Jan. 20 has a few guidelines are confusing. Some viewing areas are open to the public and free, while other viewing areas are limited and ticketed. The two-hour-long parade will weave its way through 15 blocks of Pennsylvania Avenue between the U.S. Capitol and The White House starting at 2:30 p.m. EST. To check for ticket availability, you'll have to head over to the official Presidential Inaugural Committee's website where you'll have to fill out a form with your request to be processed. No, they don't make attending these events easy. But with the influx of interested visitors, the committee's got to make the ticketing process for these inaugural events a bit of a commitment.

Basically, if you're dying to get a bleacher seat secured for parade-viewing, you'll need to get yourself a ticket. You can request it through the committee for around $60, or you can get it from a untrusted third party for upwards of $1,500. Yes, seriously, this type of event creates ticketing scams. So if you're just semi-interested in seeing the parade and being a part of the festivities, there's no need to bother with tickets or plant yourself in one spot.

So far, various marching bands, drill teams, equestrian groups, veteran's associations, police and firefighters are scheduled to participate in the parade — the complete list is posted on the 58th Presidential Inauguration's website when it's finalized. Another option for parade viewing that requires zero movement, zero exposure to cold weather, and zero interaction with with other human beings, is watching the parade on TV. It will be widely televised, and TBH, you'll get a much better view of whatever's going on via cable.