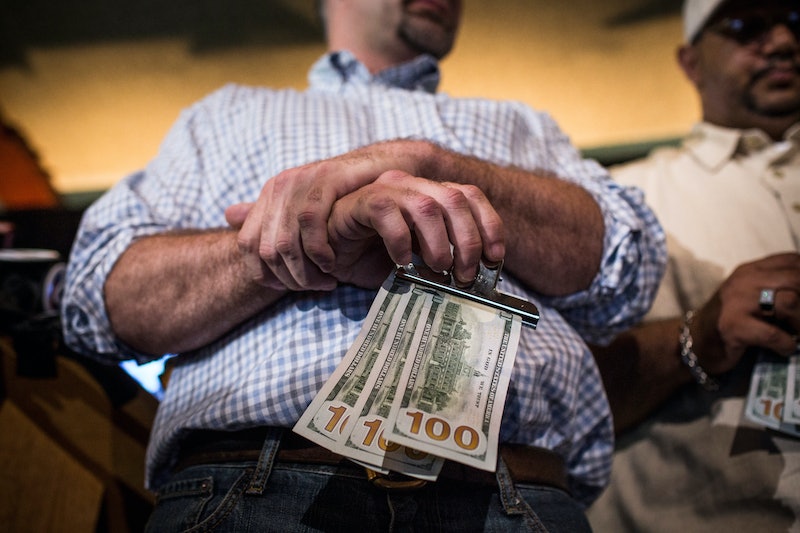 According to the Center for Responsive Politics, federal law requires that all political action committees (PACs), political parties, and federal candidates disclose any and all contributions that they receive that are over $200. This information, which includes donors' names, addresses, occupations, and employer information, then becomes public record freely available — and easily searchable — via the Federal Election Commission (FEC).

That being said, Bustle was easily able to find the names and personal information of a number of people who'd made donations of less than $200 to presidential candidates and partisan political organizations during the 2016 election. Some of those public records appeared to be folks who had made either a one-time donation of less than $200 or a few single or double-digit donations to a candidate, organization, or state's political party.

It's worth noting that ActBlue's privacy policy clearly states that "campaign finance law requires that we send your name, address, occupation, and employer information along with details of your donation to the recipient of your contribution and report this information in our reports to the Federal Election Commission (FEC) or the relevant respective state agency." The organization does not appear to limit its reported records to donations valued at more than $200.

Other records of single and double digit donations in the FEC's database, however, turned out to be financial donations from people whose combined year-to-date contributions to one particular candidate or organization totaled more than $200. For example, let's say Jane Doe made monthly donations of $25 to the political candidate of her choice. In eight months she'll have donated $200 and her chosen political candidate would legally be required to disclose all of her contributions and information to the FEC. In fact, it would take just a year's worth of recurring monthly donations valued at $16.75 to push a person to the FEC's $200 disclosure limit.

It's worth noting, however, that there are thousands of contributions listed in the FEC's database as having been gifted by "anonymous, anonymous" or "anonymous, no data," and even "ASDFA, ASDFSD." What's more, the information reported at the time of the contribution doesn't always appear to be vetted. Bustle found multiple donations from a "Donald Trump" whose occupation was listed as "misogynist, bigot, liar, & con man."

Perhaps the best way to make a truly anonymous donation is with cash. According to the FEC, candidates and organizations for the 2019-2020 federal elections are not legally obligated to report anonymously-made cash contributions under $50. But be aware, per FEC rules, individuals are limited in how much they can contribute to a candidate, campaign, PAC, or party. These contribution limits are outlined here.

While it's not completely clear what impact having your name and political donation listed as public record may have, it seems there are indeed people curious enough to dig through records to, potentially, find your contribution. In fact, Bustle found articles such as MoneyTalkNews' "How to Find Out If Your Neighbor Is Donating to a Politician," which walk readers through how to search not only the FEC's database, but also databases from The National Institute on Money in State Politics and the Center for Responsive Politics.