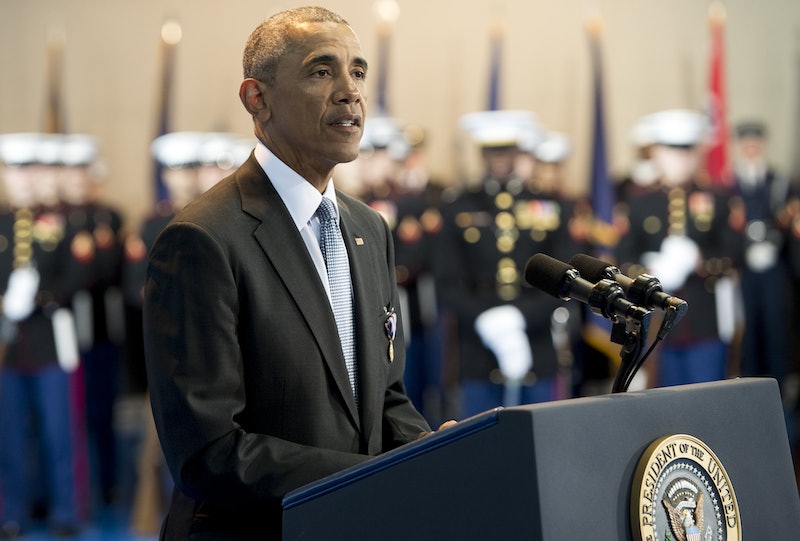 Depending on what side of the political spectrum you fall on, the next two weeks represent either the final 14 days of political sanity, or the last short period to be endured before President-elect Trump finally takes office. But whether you're a die-hard Trump fan or a longtime Obama supporter, the presidential farewell speech is an opportunity to look toward the good that might lie in our collective future as a country. There are countless Americans who want to attend the speech itself, and lucky for them, tickets will be available, and they're free of charge. It helps if one resides in Chicago, the city in which President Obama recently announced will host his final and historic national farewell address.

Tickets will be made available at McCormick Place in Chicago on Saturday, Jan. 7. There is a strict one-ticket-per-person policy, and if you want to increase your chances, make sure to get there early, as tickets will be given out first-come-first-served fashion. McCormick Place is also, not coincidentally, where President Obama will deliver his farewell address. The site has special significance to the outgoing president as it was where he held a 2012 post-election victory rally.

In a statement released Monday, Obama referenced his home city in warm terms. "On Tuesday, January 10, I’ll go home to Chicago to say my grateful farewell to you, even if you can’t be there in person." And though he went on to say he'd just started the process of writing his final speech as POTUS, Obama indicated the tone of his speech will be in keeping with his original campaign theme of hope, saying, "I’m thinking about them as a chance to say thank you for this amazing journey, to celebrate the ways you’ve changed this country for the better these past eight years."

It will be interesting to see how President-elect Trump responds to Obama's last public pronouncements as president. Though the two were initially cordial to one another in the wake of Trump's Nov. 8 win, that mutual generosity has been fading fast.

For his part, Obama told his old adviser David Axelrod that if he had run for a third term instead of Sec. Clinton, he would have beaten Trump. And while there may be every reason to believe in that likely outcome, this seems like a pretty good example of poking the proverbial bear.

Still, since the presidential farewell address is traditionally one of warm remembrances of the past term(s), with a clear-eyed look towards what challenges lie ahead, it's probably safe to presume Obama will be in his oratorical element. So by all means, if you can, pick up a free ticket and be present in Chicago for this final Obama-as-POTUS speech.