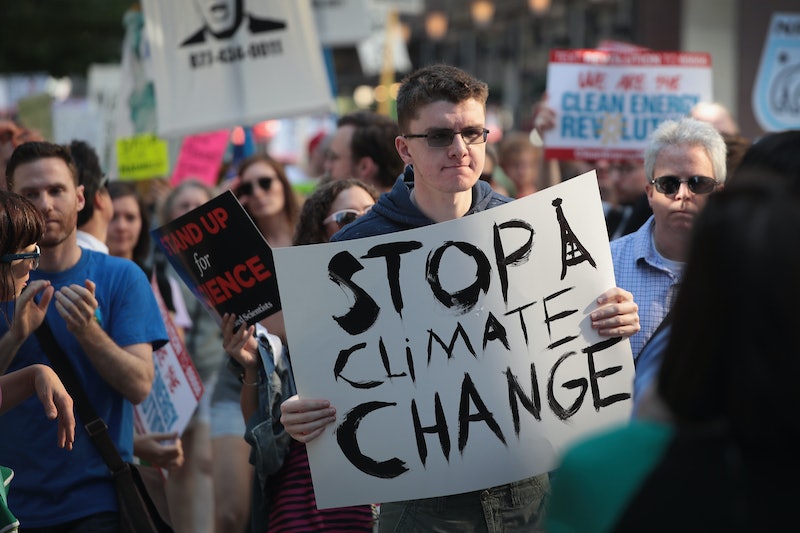 It's been a tough week for the climate: because President Trump has withdrawn from the Paris Climate Accords altogether, the remaining countries at the G20 political summit were forced to cobble together a 'G19' statement. If that action left you wondering about the future of our environment, New York Magazine has a few answers: the magazine's new cover story features dozens of scientists speaking off the record to give us an honest idea of what they believe will happen if we don't get moving on global warming. Their answers are chilling: raging floods, refugee populations in the hundreds of millions, and large segments of the planet rendered uninhabitable. But before you lose hope entirely, know that scientists are working on ways to reverse climate change and combat some of the problems it's causing, from the rising ocean acidity levels to toxic soil.

Of course, many of these ideas are largely theoretical or have only been tested in the short-term — for instance, ocean fertilization, which hypothesizes that putting a huge amount of fertilizer into the sea will feed algae and in turn absorb CO2 from the air, has yielded great immediate gains, but it's completely unclear what it does over the long term. And many of the ideas — like the 2016 discovery that rainforest soil could be turned into valuable crop fields via an ancient West African technique that uses charcoal and kitchen waste — are more about helping people cope as best they can in a changing world than they are about reversing the horrific damage of climate change. However, others are hoping to tackle the consequences at their heart, and they while some of them sound like incredible long shots, they may also be our best shots.

More like this
5 Ways To Help People Impacted By Hurricane Ian In Cuba & Florida
By Emma Carey
8 Completely Unserious Tips To Make Your Cuffing Season A Success
By Ginny Hogan
Here’s Your Daily Horoscope For October 6, 2022
By Mecca Woods
Everything You Need To Know About Angel Numbers
By Nina Kahn and Brittany Beringer
Get Even More From Bustle — Sign Up For The Newsletter