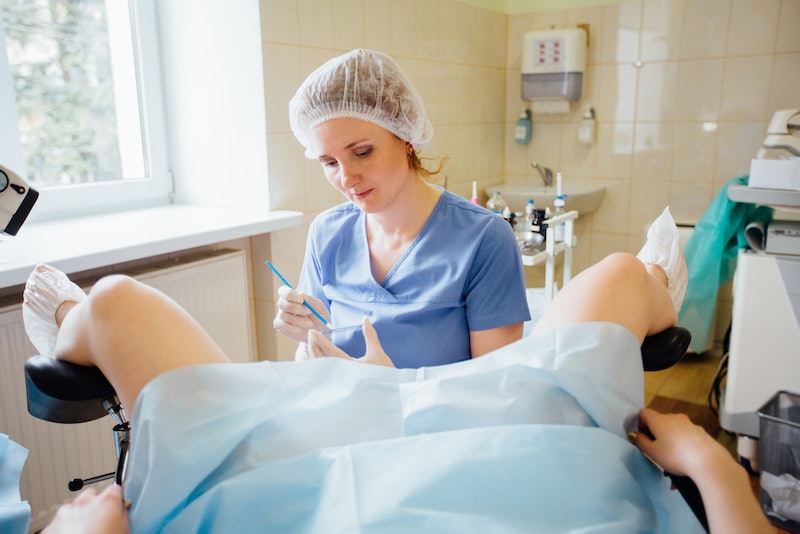 For some, smear tests can be an uncomfortable topic. Some people are too embarrassed to have one and others put the appointment off because they are simply scared. A new survey has revealed that some people aren't even sure what the screening method is for. So what can smear tests detect?

Of the British women surveyed, one in five believe that smear tests can look for ovarian cancer, according to the results of a new study conducted by YouGov and the Target Ovarian Cancer charity. This belief is completely false and could even be dangerous.

Smear tests are designed to detect abnormal cells in the cervix, states Bupa, helping to both diagnose and prevent cervical cancer. Women and people with cervixes aged 25 and over are invited to have one. Ovarian cancer, on the other hand, does not currently have a screening test. The only way to know you have it is by being aware of the symptoms and visiting a doctor who can run further tests.

“We need to combat the confusion around ovarian cancer and cervical screening, because while smear tests are a vital tool in public health, a similar option simply does not exist in ovarian cancer," Annwen Jones, chief executive of Target Ovarian Cancer, said in a statement. What's particularly worrying about this lack of knowledge is that ovarian cancer is the UK's deadliest gynaecological cancer, states charity Wellbeing of Women.

If a fifth of women mistakenly believe a smear test is protecting them from this form of cancer, it means people may be more likely to ignore symptoms of the disease, potentially leading to late diagnoses.

According to the NHS, common symptoms of ovarian cancer include persistent bloating, a loss of appetite or feeling full quickly, pelvic or abdominal pain, and a need to urinate more often or more urgently. There are a number of other things to look out for including persistent indigestion or nausea, pain during sex, a persistent feeling of tiredness and unintentional weight loss.

It's a good idea to visit your GP if you've been feeling bloated for the majority of the past three weeks, states the NHS. Similarly, you should book an appointment with a doctor if you're experiencing other symptoms that aren't showing any signs of disappearing. This is especially true if you have a family history of ovarian or breast cancer.

In March, Public Health England is launching a campaign to highlight the risks of cervical cancer, relay the benefits of having a smear test, and encourage women and people with cervixes to attend their screening appointment, even if they are frightened or embarrassed.

Smear test attendance is currently at an all-time low in the UK, so this is a necessary step. But Jones believes that a similar initiative on ovarian cancer needs to be arranged.

“While we welcome government investment in raising awareness of the cervical screening programme this March, the ovarian cancer community is painfully aware that 11 [people] die every day from ovarian cancer and we urgently need to see a national ovarian cancer symptoms awareness campaign," she commented in a statement.