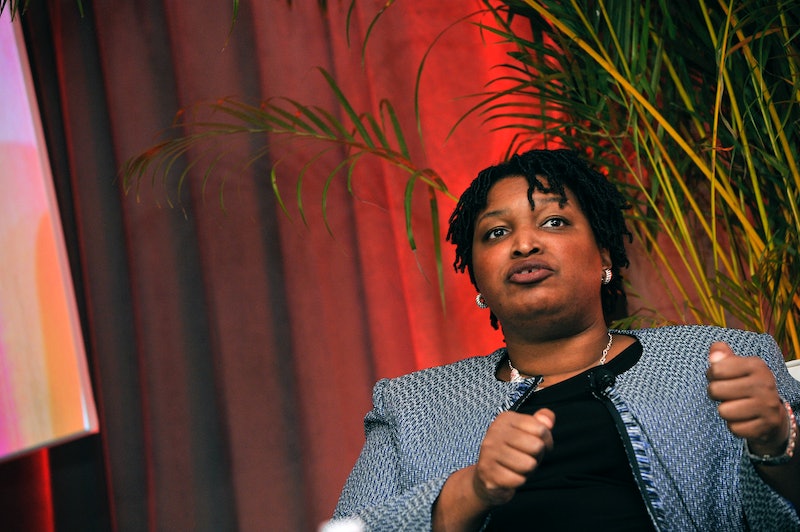 Georgia Democrat Stacey Abrams may become the first African-American woman to be elected governor in the history of the United States. Abrams recently announced she is forming an exploratory committee for a run for governor in 2018. If she runs and wins, Abrams would not only earn a historic first for African-American women, but she would also be the person to turn Georgia's governorship blue after more than a decade of Republican leadership.

Abrams is on the path to make history, but the 43-year-old Georgia politician has already had a unique, trailblazing career. Currently she is the top-ranking Democrat in the Georgia House of Representatives. And before she dove into Peach State politics, Abrams had a different role — and under a different name. She's had a thriving career as a romance novelist under the pen name Selena Montgomery.

When Abrams was in her third year at Yale Law School, she completed two very different pieces of work. The first was an in-depth analysis of the ramifications of the unrelated business income tax exemption. The second was Rules of Engagement, a steamy thriller which Abrams tells Bustle was based on her ex-boyfriend's dissertation. The article ran in the prestigious Yale Law & Policy Review; the novel was published by Harlequin.

"I'm equally proud of both publications," she tells Bustle, laughing.

Moreover, to hear her tell it, those two jobs are less distinct than one might think.

Talking to voters about policy is its own form of storytelling — in this case about how something that seems arcane and complicated can affect and matter to Georgian families. "When I’m talking to a mom of three who wonders why she should care about tax policy, I need to tell her a story about her and her family that she can understand," Abrams says. "I can have deeply boring conversations about tax policy, but I can also talk to you about what that means to you as a person."

Abrams may be the ideal translator for someone looking to understand policy. She holds a Master's degree in public policy, won the prestigious Truman Scholarship award — which, according to its website, is devoted to supporting "outstanding young people committed to public service leadership" — and worked as a tax attorney for several years after graduating from law school.

We shouldn't be simply talking about the ability to survive; we need to be developing an economy that helps people thrive and prosper.

During her time in the Georgia House of Representatives, she has spearheaded the New Georgia Project, an ambitious attempt to register potential voters living in the state. Abrams tells Bustle that as of the end of 2016, the project has registered 200,000 voters.

She has also pushed Georgia to provide more resources for kinship care (when non-parental family members raise their relatives). That issue is particularly significant to Abrams. "My parents took in my niece when my younger brother was unable to care for his child due to drug addiction," she tells Bustle. "What I learned from that experience is how complicated that space was between taking her in and getting to adoption."

Abrams shares her optimism about using government to help more Georgians move beyond mere survival to achieve meaningful success. "I want to be a governor who... celebrates the fact that we as a society believe in coming together to help each other through what we call 'government.' We shouldn't be simply talking about the ability to survive; we need to be developing an economy that helps people thrive and prosper."

I think I am blessed to have the capacity to write and tell stories. But because I understand those stories, I also am compelled to be in politics and policy, to make those stories have happy endings.

Were she to become governor, Abrams says she wants to make sure that families have "wealth building capacity" to create an educational system that is "not adequate... [but] exceptional." She also wants to ensure that government is "always there to help" and is "never there as a barrier to your success."

These lofty goals seem to arise, in part, from her work as an author, which she says requires her to think critically about what makes a life satisfying.

"I think you have to have in your leaders people who understand not just what you need intellectually or materially but what you need for your life," she says. "And people want a whole life, they want lives that are rich and filled with meaning... what I’d want to bring to this job is an understanding that Georgians are complex humans who want good lives. And I want to be part of making that happen."

"I think I am blessed to have the capacity to write and tell stories," she says. "But because I understand those stories, I also am compelled to be in politics and policy, to make those stories have happy endings."

More like this
What The UK Blocking Scotland’s Gender Recognition Bill Means
By Sam Ramsden
Watch Jacinda Arden’s Devastatingly Honest Resignation Speech
By Sam Ramsden
24 History-Making Black Women You Probably Didn't Learn About In School
By Ayana Lage and JR Thorpe
25 Inspiring Quotes From Black Women To Celebrate Black History Month
By Kyli Rodriguez-Cayro and JR Thorpe
Get Even More From Bustle — Sign Up For The Newsletter
From hair trends to relationship advice, our daily newsletter has everything you need to sound like a person who’s on TikTok, even if you aren’t.