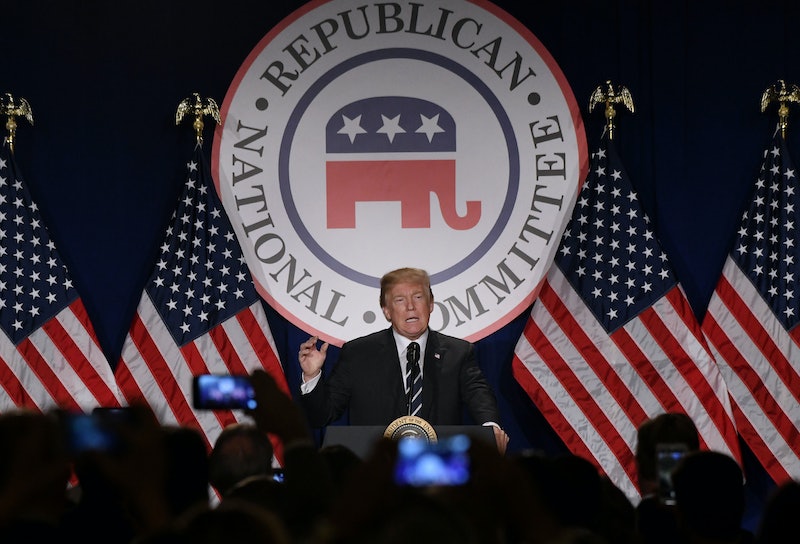 As the 2020 presidential race approaches, countless Democrats are vying to become their party's nominee to challenge the Republican contender. Many assume that this Republican candidate will be incumbent President Donald Trump, though you might be wondering if the RNC can nominate someone else in 2020. As it turns out, the Republican National Committee (RNC)'s rules allow it to nominate another candidate, though the prospect seems unlikely.

As NPR explained, current RNC rules permit other candidates to challenge Trump in a Republican primary. A primary challenge, while difficult because it would involve ousting a sitting president, could be a possibility due to Trump's divisiveness, the outlet noted. That being said, some RNC members are pushing to change RNC rules ahead of the 2020, as they're concerned that a primary challenge could splinter the party and limit the RNC's ability to financially support Trump, NPR said.

As the outlet revealed, there's currently an ongoing debate about whether or not the RNC can fund Trump's campaign if he ends up facing a primary challenge. "The party can't spend money or resources [on Trump] if there is a contested primary," an "RNC insider" told Tim Mak of NPR. "They stupidly didn't amend the rules in a substantive manner from 2016, which was an open cycle." As a result, RNC members in some states want to try to cancel Republican presidential primaries to prevent a challenger from entering the race, New York Magazine reported. However, as NPR noted, cancelling primaries violates current RNC rules.

Washington Post reporter Michael Gerson reported in a November 2018 op-ed that “Toppling a sitting president of your own party [in a primary] is a maneuver with the highest degree of difficulty.” Notably, as the National Review pointed out, a serious Trump primary challenge would likely only occur if Trump engaged in behavior that the Republican party deems unforgivably egregious.

In fact, an example from history illustrates this point. As The Hill highlighted, Democratic Representative Mo Udall echoed similar sentiments during a 1979 New York Times interview when reflecting on whether Democrats would support a primary challenger to incumbent president Jimmy Carter. Udall described to the paper what he believes are the extreme situations that would have to arise in order for a party to support a challenger to a sitting president:

There are only two conditions when a party challenges its own incumbent president. One is where major elements of the party feel so intensely and so bitterly about one issue that they oppose him no matter what the consequences. They don't care if it costs the presidency ... The other time is when their own president looks so weak, runs so persistently and significantly behind opposition candidates in the polls, that others in the party begin fearing he’s a loser and they’ll lose, too — if they stick with him

Carter did end up facing a primary challenger — Ted Kennedy — in 1979. While Carter still received the Democratic nomination, he lost the general election, a loss to which some believe Kennedy's primary challenge contributed, Yahoo! reported. As the National Review described, many Republicans fear that a Trump primary challenge could have a similar effect, causing Trump to retain the nomination but lose the general election. Or, if a new candidate received the nomination, many Republicans worry that there would be too little time to coalesce the party around him or her. So, while the RNC could nominate someone else in 2020, most signs point to this being an unlikely scenario.