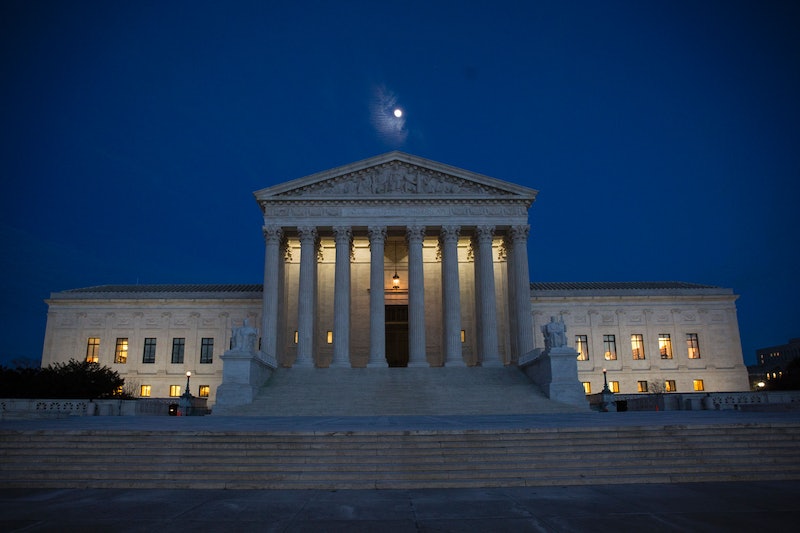 It has been under a week since Donald Trump was sworn in as president, and in that time, he's already made it abundantly clear that he will use executive orders whenever possible. The promised scope of these orders has some Americans wondering if the Supreme Court can block Trump's executive orders. The short answer is "no," at least not right away.

This is bad news for the millions of American taxpayers who are facing the prospect of having to pay for the border wall with Mexico that Trump signed into construction on Wednesday. One of Trump's signature campaign promises was that Mexico would pay for the wall, but Trump admitted to ABC News' David Muir that U.S. taxpayers will pay for the wall and be "reimbursed at a later date" by Mexico. Sure.

Trump also signed executive orders to crack down on illegal immigration and to reinstate the Global Gag Rule, complete with some additional funding restrictions on NGOs that provide women across the globe with healthcare.

So what would a legal challenge to these orders look like? In a broad sense, lawyers could argue that whatever action Trump has taken exceeds the executive power granted by Article II of the Constitution, which is concerned with the election and powers of the president. If something is not within a president's power to do, the Supreme Court could overturn an executive order on the groups that the president acted unconstitutionally in writing it.

For example, a New York Times editorial suggested a possible legal challenge to the border wall could succeed because of a decision by, of all people, the late Justice Antonin Scalia. It explained:

But the [Secure Fence Act of 2006] authorizes the secretary of homeland security only to take actions to secure the border that are “necessary and appropriate.” ... As Justice Scalia said, it would not be “appropriate” to “impose billions of dollars in economic costs in return for a few dollars” in benefits.

The wall will cost between $15 and $25 billion dollars, according to a July estimate. The benefits? Probably limited, as the New York Times editorial predicts "it won't keep many aliens out" (though Trump's lawyers would certainly argue otherwise in court).

No matter the outcome of a hypothetical trial, the Supreme Court lacks the power to stop any of Trump's executive orders in the short-term future.