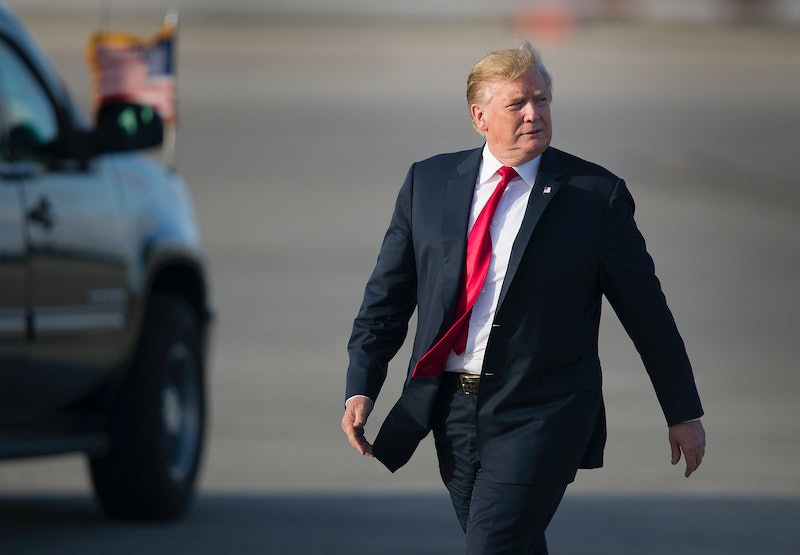 On Wednesday morning, President Donald Trump said on Twitter that if he were impeached, he would attempt to do something that has never been done before — take the fight to the Supreme Court (SCOTUS). But one judicial politics expert tells Bustle that it's highly unlikely that SCOTUS would block proceedings if Congress impeaches Trump.

"The Mueller Report, despite being written by Angry Democrats and Trump Haters, and with unlimited money behind it ($35,000,000), didn’t lay a glove on me," Trump tweeted Wednesday morning. "I DID NOTHING WRONG. If the partisan Dems ever tried to Impeach, I would first head to the U.S. Supreme Court."

Sara Benesh, a political science professor at the University of Wisconsin, tells Bustle that if Trump were to challenge an impeachment before the Supreme Court, he'd have to go down the same path that anyone else does in order to get there.

She adds that she "can't really think of a way a president can challenge his impeachment in court, given the political nature of impeachment."

Under the Constitution, SCOTUS already has a limited role in the impeachment process. While it's the House of Representatives' job to hold the impeachment proceedings, the Senate decides whether or not to convict the president, if the procedure gets that far. And it's none other than the Supreme Court chief justice who presides over that Senate trial. As The Hill reports, it's unclear whether SCOTUS would even agree to hear the case, if Trump were to try challenging theoretical impeachment proceedings in court.

Right now, it's too early to say whether or not House Democrats plan to begin impeachment proceedings against Trump at all. Discussions about a potential impeachment effort have hummed along quietly since virtually the moment Trump won the election — and some experts even mused about the possibility when he was still a candidate, according to Politico and Vanity Fair reports from the time.

However, discussions about potential impeachment proceedings were taken up a notch following the release of the redacted Mueller report last week. Importantly, Trump was not charged with any crimes associated with the investigation. However, Democrats are still pursuing their own separate investigations into the president, some related to information contained in the Mueller report, according to CNN.

While some high-profile Democrats — like Sen. Elizabeth Warren and Rep. Ilhan Omar — have said they believe the House should begin the impeachment process, not everyone agrees.

House Speaker Nancy Pelosi indicated that she had some hesitations about jumping into such a process too quickly. "We have to save our democracy. This isn’t about Democrats or Republicans. It’s about saving our democracy,” Pelosi said earlier this week, according to The New York Times. “If it is what we need to do to honor our responsibility to the Constitution — if that’s the place the facts take us, that’s the place we have to go.”

As far as Trump's theoretical challenge against impeachment proceedings go, Benesh says he's likely to fail, if his goal is to head straight to the Supreme Court.

"The Constitution has a prescribed process for impeachment," Benesh says. "And that would surely need to run its course before he'd have standing to challenge it."