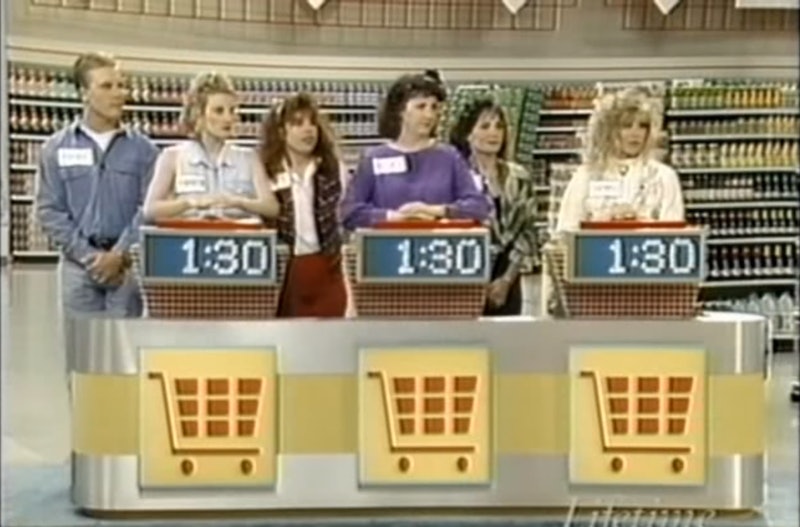 Shopping carts at the ready, everyone, Supermarket Sweep is returning to TV. Now the important question is, can you audition for Supermarket Sweep? Because you know you've always wanted to fly through the aisles of a grocery store grabbing as much stuff as you could cram into your cart.

Right now, the new incarnation of the beloved '90s game show hasn't found a home on TV just yet — although, given the excitement surrounding the announcement of its return, it likely won't be long before someone snaps it up. In the meantime, fans are going to have to be patient. That's probably not the answer you were hoping for, but the good news is game shows always need contestants. So, if and when the Supermarket Sweep spinoff finds a home, you will almost certainly be able to audition for the show. Which, let's be real, is like having an actual dream come true.

Supermarket Sweep began its life in the '60s, but the '90s version of the show is the one that left a generation obsessed with the idea of racing shopping carts and hunting down random food items. Part quiz show, part shopping as sport, Supermarket Sweep had it all. Is it any wonder that people still want to be on the show all these years later?

When and where auditions are held will depend on where the show ends up filming. The reboot is in the earliest stages right now, and little information is known about what the new Supermarket Sweep will look like. You can bet it will have some modern twists though. FremantleMedia is the company that has acquired the rights to the show, and they seem eager to bring the shopping madness to a whole new generation of viewers.

In a press release, FremantleMedia vice president Vasha Wallace said, "Modern technology allows us the opportunity to update the show, making it relevant for a 21st century audience." The company's commitment to making Supermarket Sweep relevant is appreciated, but the game show is so beloved, they could probably bring it back with the retro sweater-wearing contestants and 1994 egg prices and no one would mind.

That's part of the show's charm. Despite the competition aspect, it was pure comfort food TV. As Henry Howard, son of series creator Al Howard, said in the release, "In Supermarket Sweep, one lucky team tries for the bonus money, but on this show, there are no losers— only shoppers having a great time."

And that's exactly why there will be no shortage of people lining up to join in the fun of the reboot. Anyone can play Supermarket Sweep. As long as they know their pop culture references, have gone grocery shopping at some point in their lives, are at least a tiny bit charismatic, and own a pair of running shoes, there's no reason they couldn't compete. As game shows go, Supermarket Sweep is truly one-of-a-kind. It turns one of the most mundane parts of being an adult — grocery shopping — into a sport that can be enjoyed by the masses.

The best news of all may be that you are now totally qualified to be on the show. Face it, when you were a kid, you probably wouldn't have known the answers to half the questions, and there's no way you would have been able to push around a shopping cart overflowing with 10-pound frozen turkeys. Now, you know the price of your favorite brand of peanut butter by heart and you're ready to crush the competition.

Take heart in knowing that when the time comes for Supermarket Sweep to start casting contestants, you'll be ready for the call.