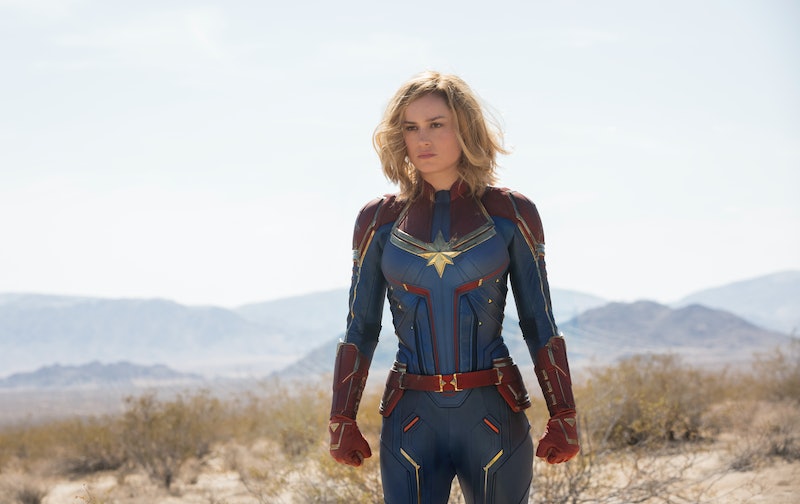 Spoilers ahead for Avengers: Endgame. Few superhero's looks have been analyzed, criticized, and dissected as much as that of Captain Marvel. Back in March, when the Brie Larson-led Captain Marvel hit theaters, most of the conversation revolved around the fact that the Carol Danvers of the MCU doesn't sport the skimpy outfits of her comic book persona. A few weeks later, the trailer for Avengers: Endgame hit, and Larson was noticeably wearing more makeup in her brief scene than she had in the entirety of Captain Marvel. Thankfully, there was a simple explanation for the discrepancy: The Endgame scenes were shot first, and Larson and her team were still figuring out Carol's look.

But with the release of Endgame comes all new chatter about Carol's appearance. For the first act of the film, Captain Marvel's hair looks much like it does in her solo film. But when Endgame jumps five years into the future, Carol debuts a much shorter cut that hadn't previously been debuted in any of the marketing materials. And fans are seriously into this major change. Amongst all the Endgame things audiences found to freak out about on Twitter, Carol's new 'do was definitely one of the most popular.

Earlier this week, Joanna Bennett, Larson's stunt double on the film, shared an Instagram photo that offers up a closer look of the style. The short, semi-buzzed underside and flipped over blond pompadour top is kind of reminiscent of Jack Dawson imploring you to meet at the clock before the Titanic goes down. But on these women, the cut is also a feminist statement that crushes the ridiculous norm of lady superheroes fighting with their hair in their face. Black Widow's ringlets flung around her face during her martial arts takedowns in Iron Man 2, and Scarlet Witch's long locks somehow never got in her way during Age of Ultron. But Captain Marvel knows what's up. The very best way to keep your hair off your face is just to chop it all off.

Carol's new look in Endgame is also more reflective of how she's drawn in the comics than her standalone movie look. In 2012, Kelly Sue DeConnick rebooted the Ms. Marvel series into Captain Marvel, and with her new adventures and new name came a new style. For one, the bathing-suit costume was tossed. Then there were some adjustments to her hair. Captain Marvel first embraced those changes with her flight suit-inspired uniform, which features a helmet that creates the same effect as a mohawk, which, as Entertainment Weekly points out, mimics a Roman legionnaire's helmet. But that was only the beginning. Since her re-imagining in 2012, Captain Marvel has had a number of short haircuts, including the very short style that she rocks in Endgame.

But Carol's new haircut means more to fans than any old style change. Not only is Carol's new style a rejection of the hyper-sexualized and strictly feminine look of female superheroes past, it's also a celebration of what many are calling "Big Queer Energy." Carol's sexual orientation isn't mentioned in either of the films, but Emma Spector wrote for Vice that Captain Marvel serves up "major lesbian energy." For Den of Geek, Delia Harrington wrote that Carol's hair in Endgame "screams queer visibility and gives a lot of fans hope."

Hope for what, you might ask? Hope that Marvel will actually jump into the deep end and make one of their superheroes explicitly queer, rather than deleting a confirmation of bisexuality as they did with Valkyrie in Thor: Ragnarok, per Tessa Thompson's comments to Rolling Stone, or including a blink-and-you'll-miss-it queer character as played by one of Endgame's directors in the most recent film. And that possibility definitely has queer fans excited.

Perhaps next time Captain Marvel hits the screen, queer audiences will have a little more representation to celebrate than just their interpretation of her haircut.

More like this
Everything You Need To Know About ‘Black Panther: Wakanda Forever’
By Bustle Editors
A New Scooby-Doo Movie Confirmed Velma Is Gay & Twitter Is Pumped
By Radhika Menon
The 50 Most Powerful Characters In The Marvel Universe, Ranked
By Johnny Brayson and Nola Pfau
Lin-Manuel Miranda & Tituss Burgess React To 'Little Mermaid' Casting Backlash
By Radhika Menon
Get Even More From Bustle — Sign Up For The Newsletter